From ‘Them’ to ‘Us’ - Human Tragedy Exploited

Even as a lot of noise is being made about the latest Bollywood offering ‘Kashmir Files’, one recalls the noise around another Bollywood movie ‘Parzania’ whose screening was not allowed to take place in Gujarat 15 years ago. Both deal with human tragedy.

This was despite the fact that the movie Parzania had been released across India. The plot was inspired by the disappearance of a Parsi boy Azhar Mody at the time of the infamous Gulbarg Society massacre on February 28, 2002.

It was February 14, 2007 ---Valentine's Day---a day to celebrate love. But the issue that hogged the headlines in Gujarat that day like many days before was Parzania – a movie that awaited screening on the day of its release in Gujarat. The film was facing an unofficial ban. The multiplex owners, fearing trouble from right wing activists, were avoiding the screening of Parzania.

The film is about the trauma of a Parsi family who lived in the Gulbarg Society of Ahmedabad that had seen one of the worst communal massacres of 2002. In that primarily Muslim society had lived the family of Dara Mod - his wife Rupa, a daughter and a son named Azhar. The boy remains missing till date.

I never knew what the Parsi family had been through till February 2004 when I had run into Dara and Rupa amongst the other survivors of Gulbarg Society whom I had gone to interview after two years of the incident.

The couple were clearly distressed. Taking them to a separate room I spoke with them at length. Three of their family had managed to hide and stay alive. Three of them had barely managed to hide and stay alive. But there was no clue of what had happened to Azhar. The couple had gone on to relate the details of the attack on the society. Former Parliamentarian by the name of Ehsan Jaffri was amongst those who had been killed.. It was actually his house that had proved to be a safe haven for the majority of the survivors.

I still remember seeing Dara and Rupa break down before me. I recall the words,'' We have approached everyone…the police…the acquaintances…but to no avail. We have paid visits to Godmen—Sadhus, Ojhas and Babas --- from all the religions. We just do not know where to go next.''

The family had moved out to a different locality in western Ahmedabad after the incident but the parents made regular visits to the area around Gulbarg Society to find a clue about their son. Their hope was based on the fact that the status of the case was in the missing person category in the Police records. It had to be missing because neither had he been found alive nor had his body been recovered. This resulted in repeated visits to the Police officials investigating the case.

I had come out very disturbed after the interview as I did not have the courage to look into their eyes and question them anymore.

After a couple of minutes I had started interviewing another survivor of the Gulbarg massacre, a neighbour of the Mody’s. Midway during the talk I referred to the case of Mody's missing son. His response came as a major blow. He said,'' The boy is dead. Many people had seen him being dragged down as he was trying to climb up the stairs to find a safe place. The attackers had killed him and thrown his body in a hedge nearby.”

The neighbour had told me that it was later in the night that petrol was arranged by a small-time criminal at the behest of those trying to cover up what had happened and Azhar's body, along with a few others, was consigned to flames.

“The parents refuse to accept this as they never got to see his body and they never will get to see it. In the process they will continue to be fleeced by various people moving in various garbs in the society,'' he said.

What he had said stood true on the day the film was released and not screened in Gujarat. It holds true even today. A film had been made around the traumatic episode of Azhar going missing five years later. Rupa had told me some months back that one of their friends was making a movie revolving around what they had been going through.

When the issue of Parzania’s screening being stalled had come up, the journalist in me had once again mustered the courage to call up Dara who was giving interviews to different media networks in the hope that if Parzania was shown in Gujarat, maybe he would find his Azhar. The boy’s picture was shown prominently on the screen towards the end of the film.

In an effort to prolong the conversation I had just asked him that Azhar would be thirteen years of age that day and a boy that old would surely be knowing his address or at least the locality where he lived. Hence he should have come back by then. Dara's reply was very disturbing,'' We think that the boy might have had a memory loss because of the mental trauma and has failed to return. We just want the film be shown so that someone can bring him back to us.''

The last interaction I had with Rupa was at the end of the 2007 elections. After that, like many others who belong to the profession of journalism that gets cruel at times, I too had moved to another job in another city.

The movie eventually was available in the form of DVDs and in other formats in the era of internet expansion. But Azhar never returned. He has just resurfaced as a counter to the cacophony around the Kashmir film. But in this too there is injustice, as this is not how human tragedy should be revisited. Another similarity is that just like Uttar Pradesh in 2022, Gujarat was poll bound in 2007 too. 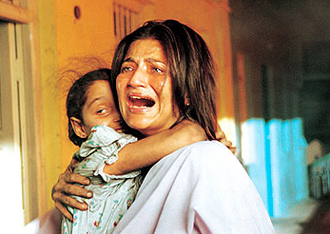 Sri Lanka Rescued From Becoming a Failed State 2 minutes ago

An Astonishing Achievement 7 minutes ago