The SBSP has allied with the BSP, BJP and SP in the past

Since Saturday rumours are rife that Rajbhar is walking out of the alliance to support the BJP in the future. This happened after a photograph of Rajbhar with Union Home Minister Amit Shah and two other BJP leaders went viral.

Talking to the media, Rajbhar said that the photograph was an old one, and that all talk of him supporting the BJP is untrue. However, Rajbhar has not stopped smiling ever since he won the Assembly seat from Zahoorabad in Ghazipur, east Uttar Pradesh. His son Arvind however lost the contest.

On Saturday, Arvind Rajbhar national chief secretary, SBSP too clarified that there is no talk of an alliance of his party with the BJP.

The question is who is responsible for releasing the photograph of Rajbhar with BJP leaders from the past? Is it the BJP, or Rajbhar himself?

Rajbhar had contested the 2017 assembly elections together with the BJP and won four seats. He was a minister in the Yogi cabinet for Backward Classes but after a few months he left the government.

The Rajbhars are of greatest political importance in east UP where they influence about 125 seats. But how important is Rajbhar really that the bigger political parties like the BJP and the SP want him so badly as an electoral ally?

The Rajbhars are important enough. The bigger political parties want Rajbhar just to make sure that the vote of his supporters increases their strength at the polls. 59 year old Rajbhar is a king maker, who surely wants to be king one day. He is called the Laloo Prasad Yadav of UP because of his colourful language, his earthy way of talking, and his connect with voters. In a single breath he is able to count the names of countless communities that are most backward. In the past he has questioned the construction of the Ram Mandir wondering if that would educate children belonging to poor and lowered caste families.

He dares to tell the BJP to focus more on schools and education than temples. He has coined phrases like the Bhartiya Jhagda Party and the Bhartiya Jhoot Party for the BJP (squabble and lie).

Rajbhar speaks on behalf of all the smaller communities in east UP who are without a voice. The Rajbhar community is only three percent but together with smaller caste groups, the backwards total up to nearly 22 percent of UP’s population with a say in nearly 125 Assembly seats and in 12 Lok Sabha seats.

Part of his demands is reservations and the implementation of the Economic Justice Committee recommendations and for a policy of unified, compulsory and free education for the poor. He wants two seats, one for himself and a second one for his son besides other seats from whichever political ally he negotiates with.

So who is Rajbhar?

The son of a peasant, Rajbhar’s political career began with the Bahujan Samaj Party. His mentor was Kanshi Ram, founder of the BSP. While in the BSP, he was critical of Mayawati’s government, and complained that the chief minister was least interested in problems facing people belonging to the most backward castes. He accused Mayawati of taking care of the interest of only a favourite community of Dalits. So saying Rajbhar had walked out of the BSP to join the Apna Dal. He had later launched the SBSP in 2002, naming it after Suheldeo, an 11th century king believed to be a Rajbhar who fought the Mahmud of Ghazni armies.

When Rajbhar is annoyed, he says that he feels like pulling out a sword just like King Suheldeo and slicing the head of those who anger him!

It is not unusual for Rajbhar supporters to chant:

Born in a village in Banaras, Rajbhar graduated in 1983 and has supported a range of political parties in the past as he knows that he is unable to contest elections on his own. At least not yet. So he has hobnobbed with Asaduddin Owaisi as well. Therefore it is no surprise if he wants to support the BJP once again in the 2024 Lok Sabha election. The question is what will the BJP give him in return?

Or, he may stay on with the SP which is his present ally. It all depends on what Akhilesh Yadav is able to offer Rajbhar within the alliance. For Rajbhar is not one to remain in the political wilderness for too long. The thought of remaining number two in any political alliance for forever is not why the Rajbhar plays politics.

Wherever he sees power there he will go. 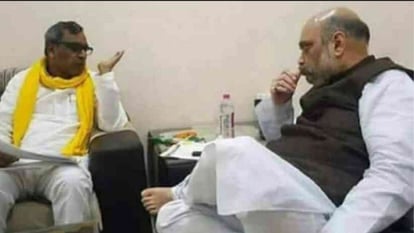