'We can spread these ideologies in the north'

Tamil Nadu Chief Minister M.K Stalin recently inaugurated the Dravida Munnetra Kazhagam party office in the national capital, in a development seen by many as a move to assert the DMK’s role in national politics. In a letter to party cadre Stalin described the office as “a compelling symbol of the indispensable role that the DMK and the Dravidian model plays in national politics.”

According to Rajya Sabha MP and DMK member T.K.S Elangovan:

“We had to have an office in Delhi for the members of the parliament from the party, that’s one. But more importantly, now that we have an office, people will come to know about DMK’s ideology. We can spread these ideologies in the north - ideologies such as equality and inclusivity. Tamil Nadu has definitely set an example in terms of development, especially human development. We can propagate this in the north.”

“If we have an office here, people can come in and we can talk more about what we have done in Tamil Nadu - for instance, the upliftment of the downtrodden though various government policies. In Tamil Nadu, you can see people from the most underprivileged sections of society go on to become entrepreneurs and establish their own factories. This can be made possible in the north as well,” Elangovan told The Citizen.

He went on to say that the DMK has always played a big role in national politics, and that party stalwart M Karunanidhi was instrumental in choosing the prime minister in 1996.

But Stalin’s leadership has brought about a huge shift in the perception of the party’s role in national politics, Elangovan added. Ever since Stalin came to power, he has been repeatedly calling for federalism and secularism, speaking out against the Centre’s policies.

The inauguration of the office also set the stage for opposition leaders to come together. Sonia Gandhi INC, Akhilesh Yadav SP, Farooq Abdullah NC, Mahua Moitra TMC, and Sitaram Yechury CPIM were among those present at the event.

Stalin has tried to get opposition leaders together in the past. In February the Tamil Nadu chief minister wrote to 37 non-BJP politicians inviting them to join his newly formed All India Federation for Social Justice, aimed at protecting the rights of the oppressed against the oppressors.

During his three-day visit to New Delhi, Stalin also met with Prime Minister Narendra Modi and submitted a 14-point memorandum pushing for the state’s demands.

These include the release of pending GST dues, the Mekedatu dam, NEET, the crisis in Sri Lanka and problems faced by fishermen along the Indo-Sri Lankan border, dropping a neutrino observatory that has faced popular opposition, and including the Narikoravar/Kurivikkarar communities among the Schedule Tribes.

During his trip Stalin also visited government schools and mohalla (neighbourhood) clinics along with Delhi CM Arvind Kejriwal, and said he would soon establish a similar model government school in Tamil Nadu. 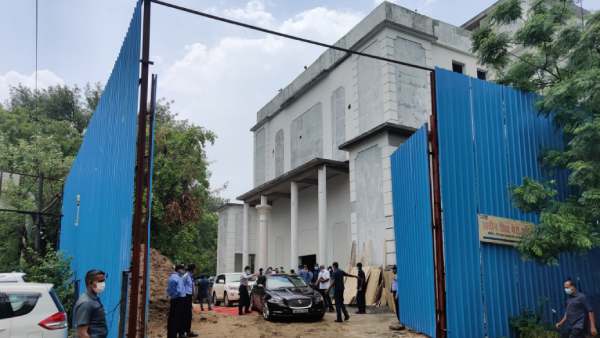