‘Now We Will Never Return’

Nahid Colony on the outskirts of Kairana in the Shamli district is one such “relief camp”, a living example of the misery the people continue to deal with in their daily lives. It houses hundreds of riot victim and survivor families who are denied access to education, healthcare and employment. They are still unable to return to their homes.

“Who is responsible for the fact that there is no healthcare and education here? Where are we in the ‘sab ka saath sab ka vikas’ [support and development for everyone] slogan? If we return there the same scenario can be repeated for us” says Khalid, 52, who runs a tea stall nearby.

Expressing his disdain for the government he highlights the issues of his colony. Smoking a hookah, he reflects on the trauma they faced. “Our fathers and forefathers were born there. Don’t you think it hurts us to leave our ancestral home? Only we can feel our pain, no one else.”

“We were told to be vigilant, they will come in the night from the jungles,” recalls Salman, 35, who was forced to flee from Kawal village in Muzaffarnagar in 2013. “How are we supposed to know who they were… only God knows.”

The Muzaffarnagar communal attacks of 2013 have been described as the worst violence in UP’s recent history. The army had to be deployed in the state for the first time in 20 years.

“When we left we thought we would return in a month or two when the situation cools down. Now we will never return there,” says Seema, who fled from Phugana, which was also targeted in 2013.

More than 9,000 families from the Muzaffarnagar and Shamli districts, totalling over 50,000 people, were forcibly displaced and needed refuge in temporary relief camps. Nearly a decade later, conditions in these relief camps remain unbearable.

Mohammad Mustaqeem, 80 recalls how his mother had saved him during the Partition riots in 1947, but the Muzaffarnagar riots displaced him once again. “Muslims were the worst affected in 2013. Many fled their homes, entire families were wiped out,” he recalls, struggling to speak as tears fill his eyes.

According to government figures at least 62 people were killed in the riots, including 42 Muslims and 20 Hindus, and 93 more were injured. The Supreme Court held the Samajwadi Party state government “guilty of negligence” in failing to prevent the violence. It ordered that all those accused be arrested regardless of party affiliation.

Members of the SP and the Bharatiya Janata Party were blamed for the violence by the Justice Vishnu Sahai commission which investigated the riots. The Supreme Court also held the Congress led Union government responsible for failing to provide timely intelligence inputs to the state administration to arrest the perpetrators.

However, as of 2021, just seven people had been convicted in cases relating to the riots while over 1,110 were acquitted. Twelve BJP politicians accused in the riot related cases were exonerated in 2021.

The farmers’ protest against three farm laws passed by the BJP led Union government that brought the two communities closer to each other. Uttar Pradesh went to polls recently and albeit with a reduced margin Yogi Adityanath became the first chief minister to return after a full term in the state.

Nahid Colony is named after Nahid Hasan, a former MLA who donated this plot of land to riot survivors forced to flee Muzaffarnagar. Hasan made headlines after reclaiming his Kairana seat in the recent assembly polls in Uttar Pradesh.

Residents of the relief camp continue to praise him. “Nahid is our saviour, God knows what would have happened to us had he not saved us,” says Shahzad, 31, who runs the only shop in the colony. “We are forever indebted to him.”

Hasan is currently in jail with over 17 criminal cases pending against him. However he won a landslide victory against Mriganka Singh of the BJP. His sister Iqra Hasan Chaudhary campaigned for him and Kairana recorded a high voter turnout of 75 percent in the polls.

Meanwhile Nauman Ahmed, a social worker from the Milaap Foundation, is helping build toilets close to these relief camps. “There were no toilets here. People were forced to relieve themselves in the open fields. The women were often abused by villagers. Now we have built toilets here and aim to build drains and schools here.”

Seema’s young daughter Sana, who travels 15 kilometres to her school in Kairana, wants to study to become a doctor. She says that “once there are proper schools built, we will study here.”

The residents of Nahid Colony have been forced to experience much bloodshed and continue to live in miserable conditions. The coming generation faces a sunless future with no access to healthcare, education or employment. 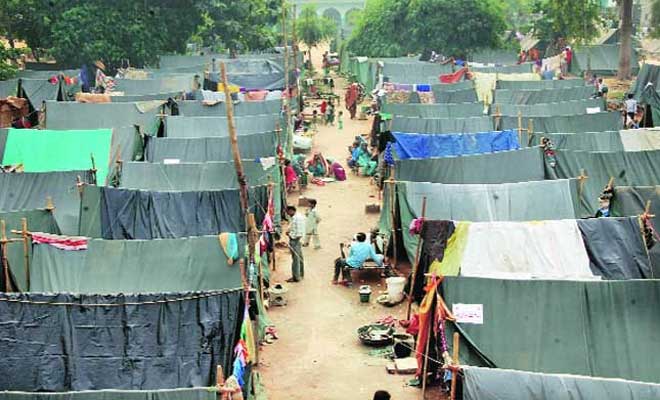