Mevani's Arrest Set to Have Social and Political Ramifications

Elections in Gujarat next

The arrest and re-arrest by Assam Police and subsequent granting of bail to Gujarat MLA and youth Dalit leader Jignesh Mevani is all set to have important social and political ramifications.

The episode has led to the Dalits rallying around Mevani irrespective of their group affiliations triggering a movement of sorts in the social sphere in Gujarat, something that was last witnessed after the infamous Una Dalit flogging incident of 2016. Since then the Dalit organisations have remained fractious, and disunited.

Mevani has emerged politically stronger after the episode. The manner in which he was arrested by the Kokrajhar Police following a complaint around a tweet in which he had mentioned Prime Minister Narendra Modi and Mahatma Gandhi’s assassin Nathuram Godse while making an appeal to the former to restore peace in places that had witnessed communal violence last month, led to an angry outburst from the people across the state.

Mewani’s subsequent re-arrest on the charges of assaulting and outraging the modesty of a lady police official by Barpeta Police led to a multiplier effect as Dalit groups and civil society organizations joined the Congress and Left in demanding his release.

Gujarat is going to the polls in six months, and this is not good news for the ruling Bharatiya Janata Party (BJP). Mevani held a press conference shortly after his release, launching a heavily loaded political attack on the BJP.

Earlier Mevani’s associates from the Rashtriya Dalit Adhikar Manch had given a call for a ‘Jail Bharo Andolan’ on May 1 which happens to be the foundation day of Gujarat. The call was withdrawn as Mevani was granted bail in the second case as well. However, Dalits across around 1100 villages in the state switched off the lights in their homes for 15 minutes on May 1 to register their protest against the earlier arrest.

Mevani is expected back in Ahmedabad on Tuesday where representatives of Dalit organizations from across the state will receive him at the airport. He will thereafter proceed to garland the statue of Dr Bhim Rao Ambedkar at Sarangpur before addressing a public meeting in Juna Vadaj locality.

“There has been a lot of anger among the Dalits who see the treatment meted out to him as a challenge to Dalit identity. They feel that they are being targeted like the minorities. The sentiment is that while the government is not addressing their concerns under the Scheduled Castes (SC) and Scheduled Tribes (ST) (Prevention of Atrocities) Act, it is otherwise using various laws to target the community and is resorting to blatant misuse of power,” Dalit and human rights activist Martin Macwan told The Citizen.

He pointed out that in the small villages and towns it was the women, children and the aged among others who participated in the event to switch off the lights. They were also joined by the Muslims.

A pamphlet being circulated on Mevani’s tweet explained, “One can raise a question on the way he has tweeted. However, his unambiguous point was to call for an appeal of peace from the office of the PM in the wake of increasing communal violence. Who else is expected to make such an appeal if not the office of the PM or the CM?”

It further read, “Here, it is the question, the more of Discrimination and less of Judicial Process. How many hours did the Police take to arrest the so called holy men who from the platform of Dharmsansad and other public occasion gave a public call of an armed assault on members of Indian minority and raping of their women in the presence of both the Police and the Journalists?”

The document also underlined, “There is no God or religion on the side of Dalits and the only protection they have to protect their rights is the Constitution. It is as clear as daylight that the weakening of the Constitution will enhance the misery and violence on Dalits.”

Ahmedabad based activist and lawyer Pratik Rupala told this reporter, “The episode is certainly snowballing into a movement. The anger of the people will certainly reflect in the votes against the BJP. Besides, the issues related to the Dalits, particularly their land rights will assume centre stage once again.”

Another political observer and activist based in Anand said, “Mevani’s arrest has led to all the Dalit groups, even those critical of him, coming on one platform. This will certainly help in the community's assertion for their rights.

Kaushik Parmar from Rashtriya Dalit Adhikar Manch further explained, “The people understand that Mevani is the only person who has been fighting for them on every occasion. They have further realized their power on seeing how public pressure has led to Mevani’s release. The fight is a long one but it has certainly got a fillip by the rallying together of the community. This is all set to get reflected in the demand for the land rights as well as that for withdrawal of cases against Dalits on the lines of those withdrawn against the Patidars.”

The Court order in the case against Mevani by the Barpeta Police has come with some important recommendations.

It said that the Guwahati High Court may perhaps consider directing the Assam Police to reform itself by taking some measures like directing each and every police personnel engaged in law and order duty to wear body Cameras, to install CCTV cameras in vehicles while arresting an accused or taking an accused to some place for discovery of some articles and for such other reasons and also to install CCTV cameras inside all the police stations.

“Otherwise our state will become a Police State, which the society can ill afford. Even opinion is growing in the world for providing next generation human rights to the people in the democratic countries like, right to recall an elected representative, right to destabilise an elected government, etc,” the courts said, while underlining that converting hard earned democracy into a Police State is simply unthinkable and if the Assam Police is thinking about the same, the same is perverse thinking.

Meanwhile, Mevani in a frontal attack on the BJP maintained that the operations against him had the sanction from the top. “There are polls in Gujarat and they want to defame and destroy me. ,” he reportedly said.

He also raised the issue of the allegations of the government using spyware Pegasus against journalists, human rights activists and opposition leaders.

He said the atmosphere created around his arrest as if he was a ‘terrorist’ is not good fordemocracy in the country.

“First they compelled Rohith Vemula to commit suicide, then they put journalists from Dalit community behind bars, arrested Chandra Shekhar Azad and now they want to destroy me,” he alleged.

He demanded the withdrawal of cases against Dalits in the aftermath of Una episode and those against minorities in the Vadgam violence.

He also sought a probe into the leakage of 22 question papers pertaining to various recruitment exams in Gujarat along with the recent huge recovery of drugs from various ports in the state failing which the state would observe a Bandh on June 1. He signed off with a dialogue from the recent hugely popular south Indian flick ‘Pushpa’. “Flower nahi fire hai mai. Jhukega nahi (I am not a flower, but fire. I will not bow down).”

The political fireworks have begun and are only going to intensify in the days to come. 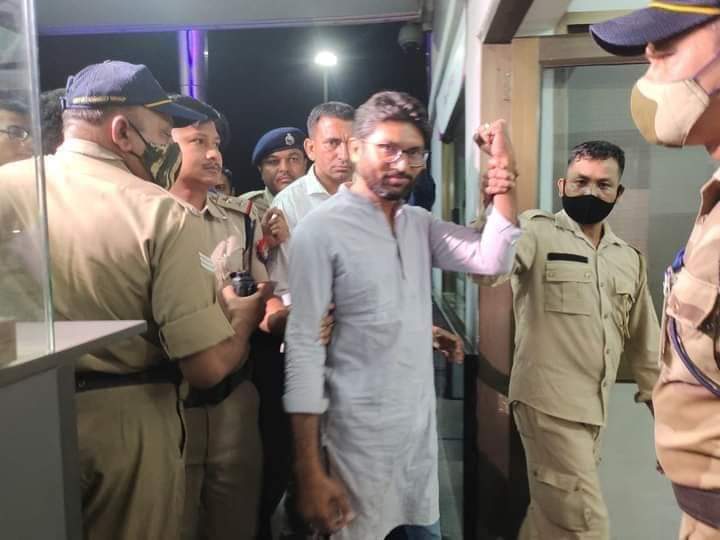