A Positive Embrace Amidst Fear and Hate

This year the festival of Eid was observed with a heavy heart. Citizens found it tough to be joyous as Muslims cope with a sense of psychological genocide in the face of blood curdling hate speech showered against them from different directions. Today mosques are under attack and Muslims assaulted, without provocation. Loudspeakers are used as an excuse to spread hate between citizens as the entire country helplessly watches the rapid radicalisation of India’s youth. Under the circumstances, citizens find it a bit difficult to feast or to enjoy friends.

Yet a party of people from diverse backgrounds met on the eve of Eid at a local café in solidarity with their Muslim friends and neighbours.

‘Respect for religious diversity is an essential element of any peaceful society, and religious freedom is a universal human right. It is the responsibility of all citizens to uphold that right. These are basic values that I was brought up with. In today’s world I implore all humans to live up to the same basic values and ideals that make us ‘us’,’ Jyotsana told The Citizen, as husband Amar Habibullah nodded.

The Dastak Manch, a local NGO hosted the Solidarity Iftar at Sheroes Cafe that was attended by people of different faiths, including atheists as proof that the flame of friendship, love and unity flickers fine between them for the moment.

The invite was sent out by We the People of Lucknow and the venue chosen by Veena Rana, the host was symbolic. The Sheroes Hangout is run by women who are victims of acid attacks. There have been attempts to disrupt the running of the café. However the women at the helm of affairs at the café are brave and have faced adversity with great dignity in the past.

Many of those who attended the event experienced it as an expression of eventual hope, peace and harmony in their midst.

‘It takes a special heart, a different level of intellect and immense courage to stand in solidarity with members of the minority community when you enjoy the privilege of being a member of the majority community,’ said a guest.

It was like a lamp of hope that was lit up in an hour of darkness and despair. A moment that convinced all those present never to lose hope in humanity.

During the meet in the open air café, there was talk of the many differences that exist between different people but how consideration and respect for fellow human beings is the glue to friendship and fraternity.

Deepak Kabir was one of the hosts of the Solidarity Iftar. Kabir is a Lucknow-based social activist. The silly man is also a poet and believes that poems have the power to soften human hearts.

Apart from writing poetry, his other weakness is to rush to help anyone in need. And often the 50-year-old gets into trouble for being kind and helpful to others.

Kabir was assaulted by the police and hit with batons and rifle butts for trying to look for his friends who were suddenly found missing from the public protests held against the citizen amendment in 2019. At the police he was detained and then jailed for several weeks. Kabir is founder of the Lucknow Collective and Dastak Manch that hosts the Kabir Festival annually in celebration of secularism, socialism and democracy through music, poetry and theatre. Kabir is constantly thinking of creative and peaceful ways to counter increasing incidents of hate since 2014. He refuses to be a silent spectator to what is going on in Uttar Pradesh at the moment.

Sangita Jaiswal works in close cooperation with Rana and Kabir. She was brought up in Kolkata and came to Lucknow as a young bride.

‘I am in the habit of celebrating Eid with the same gusto as numerous other festivals. Eid means holiday time and time to spend more time enjoying friends. Iiftar parties mean being served delicious kebabs,’ said Jaiswal.

Religion for Jaiswal is a deeply personal and spiritual matter. The Lucknow connection provides her the opportunity to experience the various nuances of celebrating Eid. The 'cleansing' of the body during the fasting month of Ramzan is similar to the fasts she observes during the festival of Navratri.

Jaiswal regrets the growth of engineered hate along religious lines in recent times. That is why she supported the Solidarity Iftar event as it is an expression of the country’s shared traditions.

Rashmi Shukla Bajpai recalls looking forward to every Eid soon after Holi. As her heart gladdens at the sight of the new moon on the eve of Eid, her Muslim friends enjoy being with her during the festivities of Diwali and Holi. Life in Lucknow is all about amalgamation and there is always gujiya and sewain both to be found in the kitchen of Bajpai.

‘The famed Ganga-Jamuni Tehzeeb of Lucknow is alive although in recent years, this harmony between citizens is under attack, undoubtedly making us live in difficult times. That being said, citizens from across communities coming together at events such as this one ensures that cherished values like brotherhood and fraternity are alive,’ Abhishek Sudhir concluded.

Several members of the Samajwadi Party (SP) were found stepping out of the air conditioned rooms of their home to attend several events held during Eid. SP supporters were happy to find their favourite politicians by their side. Many Muslims admire the SP for its people friendly socialist manifesto.

The majority of Muslim voters believe in socialism and secularism. In independent India, most Muslims have always supported non-Muslim politicians who have secular credentials, who promise to practice social justice in society and who have no time for communal politics.

The appeal of the SP to most Muslims stems from the party’s consistent demand for parity for all socially and economically backward citizens, including Yadavs and Muslims.

It is the socialist manifesto promising social justice and equal education and government services to the have nots that Muslim voters, a majority of them who are socially backward admire about the SP.

Add to this already formidable block of supporters, the Dalit vote and a combination emerges that is difficult to beat at the polls. However, Dalits and Yadavs are not united today. They are engaged even in violent conflicts over resources, wages and land.

To level this competition between the Dalits and the Yadavs is the biggest challenge before today’s SP. The SP has the potential to shake up the power structure of the day to its root if it is able to unite and to deliver to the majority population of the have nots so desperately in need of employment, food and a home. 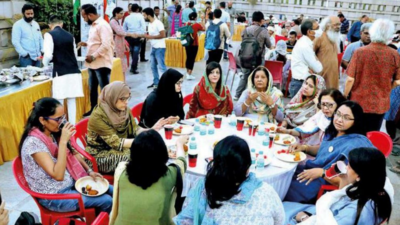