Should Indigo’s Wings Be Clipped for Insensitivity?

The airlines is facing, flak and a probe, for denying boarding to a differently abled teenager

Indigo Airlines denied entry to a differently abled teenaged boy on the grounds that he was not displaying ‘normal’ behaviour. The incident that transpired on Saturday at Ranchi airport was brought to light on Facebook by Manisha Gupta, a co-passenger on the flight. She described the distressing condition of the teenager, who “by the time he had gone through security check and reached the gate (almost an hour ahead of boarding), he seemed to be in the throes of hunger, thirst, anxiety and confusion."

While co-passengers sought to offer their support to the family, IndiGo airline staff declared that the boy cannot be allowed to board the plane as he poses a ‘risk’ to other passengers. IndiGo defended their move saying that they were concerned about the safety of the passengers, and said they arranged a comfortable hotel stay for the family before they flew the next morning. “We regret the inconvenience caused to the passengers. IndiGo prides itself on being an inclusive organisation, be it for employees or its customers; and over 75,000 specially abled passengers fly with IndiGo every month," said IndiGo in a public statement.

Gauri Gupta, a disability activist, and community facilitator opined that the airline is ‘victim-blaming’, “I think this shows the lack of sensitisation and information among the airport staff. These topics are not considered important enough that the staff should be trained to handle such situations” She added that “the news media have referred to the boy as a ‘special needs’ child. As a wheelchair user myself I don’t agree with this term. Calling it a special need means generalising it as a ‘luxury’, and discounting it as something that can be optional. It is a specific and basic requirement for us.”

“There have been decades worth of data and research proving that children with mental illnesses are victims of violence rather than perpetrators. When a child may be having a behavioral episode, it is not typical he will show aggression against their parent or a stranger. I think the airline is just ignorant rather than inclusive,” said Krupali Joshi, a child and adolescent counselor.

“This conversation, first of all, should not have happened in front of the boy. He is an adolescent who understands what is going on — he could be blaming himself for this incident that would be especially trauma-inducing for him,” she added.

This is not an isolated event of discrimination against people with disabilities at airports (PwDs). Air India staff had allegedly abused a man with a disability, and denied him entry for not agreeing to dismantle the batteries of his wheelchair. An activist who is a polio survivor had expressed her grievance when asked to remove her prosthetic at the airport, which required her to remove her trousers. Another activist who had cerebral palsy was not allowed to board the plane without an escort. Both the activists were headed to a conference on the rights of women with disabilities.

There are some provisions laid down to protect disabled persons such as the Civil Aviation Requirement (CAR) on 'Carriage by Air of Disabled Persons or Persons with Reduced Mobility'. The CAR is supposed to ensure that PwDs are assisted with respect and not discriminated against. However, a 2012 report reviewing the CAR observed that “the CAR is inadequate in terms of coverage, inefficient in terms of allocation of responsibilities between the stakeholders and is lacking in the area of necessary mechanisms for enforcement.”

Many people on social media pilloried IndiGo airline for violating the rights of PwDs. This is not the first time that the aviation industry has come under scrutiny for not being disabled-friendly -– even though most airlines including Indigo have enshrined ‘disability assistance’ on their website. 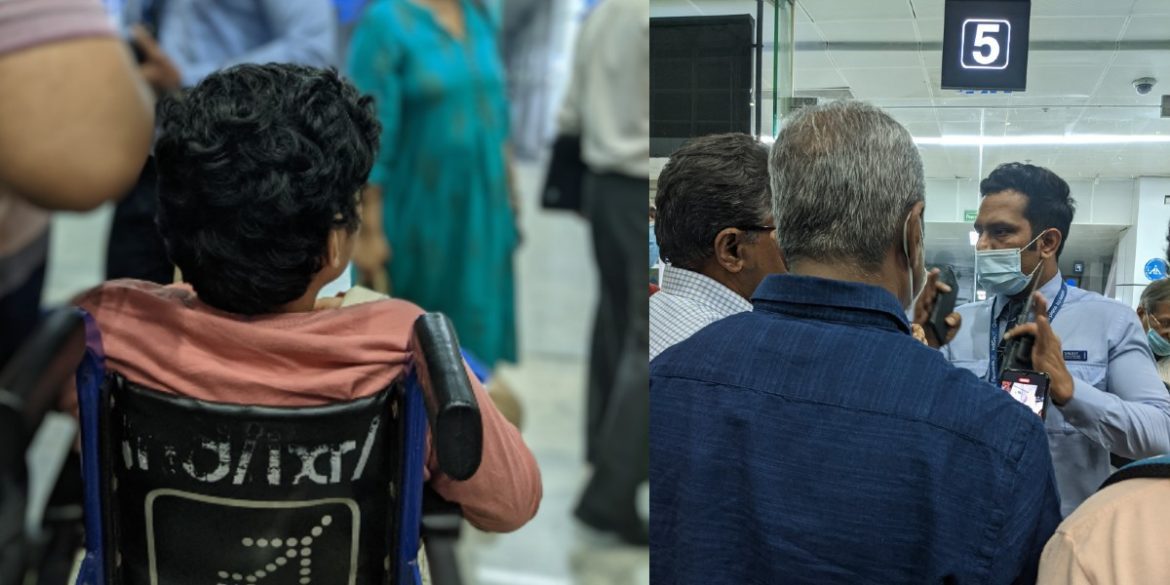