‘If the central government wants, they can have peace talks’

KOLKATA: After the Prime Minister Narendra Modi’s recent statement expressing an intent to remove the Armed Forces (Special Powers) Act from the northeastern states, many are hopeful that their long pending demand will finally be met.

In the space of a few years, New Delhi has removed AFSPA from Tripura and Meghalaya, while states like Nagaland, Mizoram and Assam are still making appeals for the same redress.

AFSPA was repealed from Tripura “before the CPIM went out of power, in 2015,” said Pujan Biswas, leader of the Tripura Democratic Front.

“In the present scenario we have seen a lot of problems happening in Mizoram, Manipur, Nagaland, and even in Assam. The special powers under this Act are conferred upon the military personnel. They can arrest anyone without a warrant, they have the power to search and seize, and are even authorised to shoot to kill, if they are of the opinion that the suspect is engaging in suspicious activity.”

Biswas said these powers are more often than not misappropriated and misused against the interests of civilians. He thinks the surfeit of security forces is enough to control any problems.

“I am of the opinion that there are lots of forces, like police forces here, we have BSF as we are in the border areas, the state government administration is also there. So they are enough to take control of any offences or crimes. There is no need of having AFSPA because they literally snatch away the rights of human beings.”

On why AFSPA, which protects the Indian Army, has always caused problems he said, “They do not understand the situation of the places. They are not quite familiar with the nature of the communities and locals there… They are always on the ground, and they have been given the biggest authority of frisking anybody or detaining anybody. They should have an eye on every person who is doubtful in nature, who can be armed or dangerous or from any banned organisation.”

He thinks negotiations would work better. “If the central government wants, they can have peace talks with those people, and easily they can come to a solution. A peaceful one.” After the Oting massacre in Mon


Richard Mrong Marak, Trinamool Congress district convenor in the West Garo Hills in Meghalaya, agreed that soldiers are unfamiliar with the local conditions, adding that AFSPA is and always has been irrelevant in the northeast.

In Meghalaya, “We have been clear regarding this issue. It is a draconian law, which should be repealed and revoked. You have to understand the mindset of the people. Why are people inclined to join such anti-government activities?”

“People are joining insurgency groups because of a feeling of insecurity, and due to lack of opportunities. So by strengthening the local police force, you are creating opportunities for the local youth.”

The northeastern state governments would be better off training their police forces on how to handle insurgency and acts of terror, rather than the central armed forces, he said. “We have unemployed youth here who are capable! You create an insecurity feeling when there is no opportunity.”


According to Biswas, political violence has declined in Tripura since AFSPA was withdrawn.

“After AFSPA was removed, political violence has reduced. But in Manipur, Mizoram, it is under the control of AFSPA, but incidents of cross-firing with the militants have not been reduced. Many politicians have been attacked by armed militants, even BSF convoys have been attacked. So what is AFSPA doing over there?”

“In states where there is no AFSPA, like Tripura, which depends upon the BSF and the CRPF, they take control of the areas without disturbing the peace and tranquillity of the region,” he claimed. “What they are doing right now, is harmful for the public, and makes the people rebel against their own government.”

“Whether the AFSPA is serving the purpose or not is a big question. But the negativity on the ground is much more,” he said. “The general public has already trusted them earlier, but after the incidents that have occurred they have lost the trust in the government… Had they effectively protected the civilians, nobody would have a problem.”

Marak, elaborating on Meghalaya’s history with insurgency and terrorism, said the state government handled it with responsibility during the tenure of Mukul Sangma, by establishing a truce with most of these groups. “Meghalaya is an example you can use as a replica or a template, in handling the issue of insurgency and terrorism without imposing AFSPA.”

In Nagaland meanwhile, though AFSPA has been repealed from most districts in the state, the situation in the Mon district where Indian Army soldiers killed six unarmed civilians, reportedly tried to hide their bodies, and subsequently killed eight more, remains unchanged.

“Almost all the public, all the masses, we are not happy. Because the Konyak Union and the civil society's demands for removing AFSPA are all in the written appeal we made to the President of India, but still the feedback is not good,” said Wango Konyak, general secretary of the Konyak Union, Nagaland.

“We submitted a memorandum during the funeral service of the 14 martyrs. After that, we have been publishing statements with the media. We keep reminding this to the Government of India as well as the Government of Nagaland,” he said.

He said that with forces like the BSF and CRPF there is no need for AFSPA to be maintained in any region of the northeast. “We discuss this very often…”

Konyak said the Nagaland government is still waiting for prosecution sanction from the Indian government so the army personnel involved in the killings can be prosecuted. The investigation has been completed and is undergoing legal scrutiny, although the identities of the individuals haven’t yet been made public, he said. 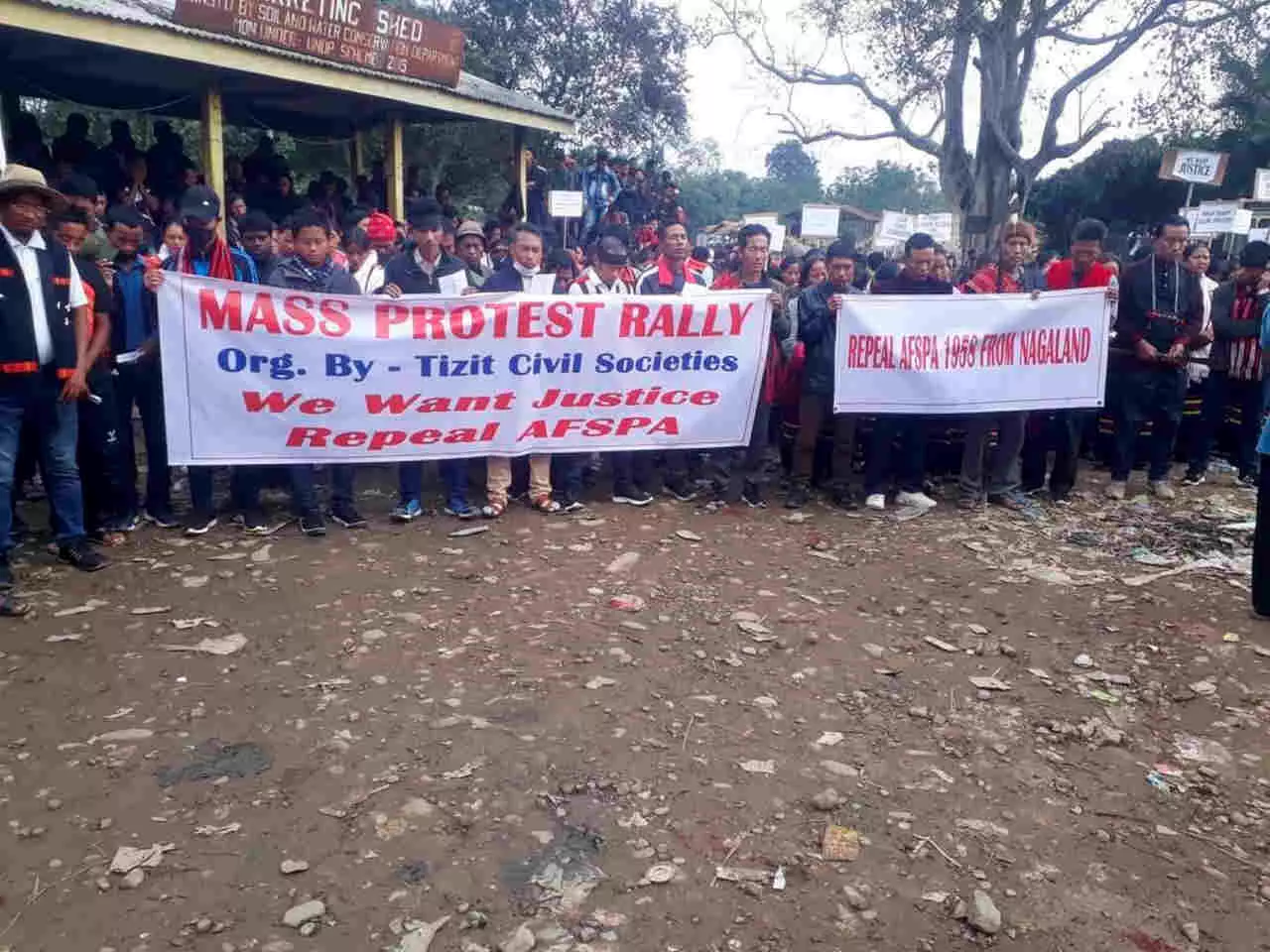