As we watched with our hearts in our mouths and awe in our eyes, Shefali, just 16, exited a Cessna 182 at 10000 ft. with a wide smile on her face and eyes that twinkled with excitement. There is no greater feeling than watching your family members skydive before your very eyes. It was remarkable to see her cool as a cucumber and not once did I notice any signs of backing out or nervousness...after all it is not every day that one partakes in extreme sports and that too 5000 kms away from home!

It all started when the family decided to take a vacation to Mauritius. The island nation situated in the Indian Ocean beckoned us. All of us did our ‘homework’ well and homed in on the activities that one of the world’s most exciting destinations offered. The top of the bucket list was skydiving of course (I was not surprised since two generations of paratroopers in the family were doing the very same thing, the only difference being that for them it was a part of their professional accomplishments) followed by scuba diving, snorkelling, parasailing etc. Well, as much as one could squeeze into a week!

We emailed the Austral Skydive Mauritius team and after a couple of emails exchanged back and forth, we had a booking for the day after we arrived in Mauritius. If there was any form of trepidation or anxiousness on the part of the jumpers, it did not show at all. There was only visible excitement! On the morning of the jump, most of us ate a light breakfast, for even though we were not partaking in the event, the butterflies in our bellies made us feel as though we were as well. 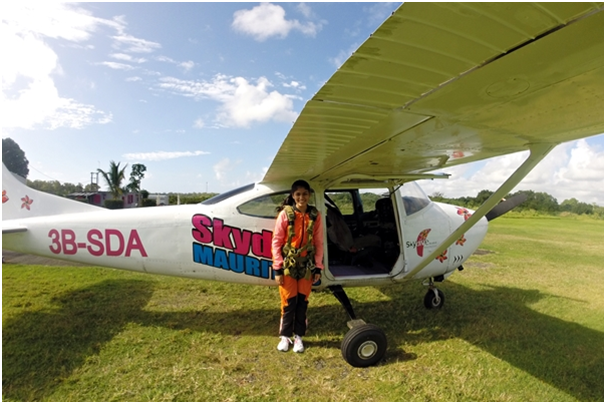 Due to a communication gap in the timings of departure from the hotel, we wound up leaving slightly late as the car wasn’t available on time. And since we had a confirmed booking for the jump, the driver did his utmost best to zip through the scenic drive, lush with coconut trees, banana plantations and swathes of feather-tipped sugarcane rippling across undulating fields and moss green mountains on either side, in order for us to reach our destination on time. Our hotel was located in the southern part of the islands and since the jump was to take place in the northern tip of Mauritius we criss-crossed right across the country taking in the beauty of the islands with its varied flora and fauna. There was a contrast of a multitude of colours with the visible turquoise sea that sparkled like blue crystal, the glistening sandy beaches, and the tropical weather that was wonderfully pleasant.

As we neared closer to our destination, the sugarcane plantations became thicker and a dirt-track through the fields led us to the hangar. The airstrip was located on the Z.I Mon Loisir Sugar Estate, Rivière du Rempart next to a lagoon. On reaching, the instructors Chris and Matej were waiting at the office and then the ‘to-be skydivers’ were checked and weighed and post some paper-work and signatures were whisked away for a briefing in the hangar. The skilled and experienced instructors did wonders in keeping the confidence levels afloat while explaining the basics which included practice exits from the aircraft, along with an overview of canopy control and landing procedures. Suited up in jumpsuits they waved goodbye before clambering into the Cessna. The cool and composed pilot gave us a thumbs up before the white-bird rolled along on the grass runway and took off. You could hear the drone of the aircraft as it slowly climbed up and gained altitude and soon it was but a spot in the sky.

Joëlle, the friendly lady managing the administration part of the business made sure we had enough rounds of cappuccino, espresso and chilled coke as we counted the minutes. My son was the first to notice the colourful dots in the sky...the parachutes had opened and were slowly but surely making their way through the clouds. Cameras aimed and hearts a pounding we watched the sky divers perform some manoeuvres before gliding down and landing gently on the green grass. A couple of ‘high fives’ and broad grins and small chatter, the team made its way back to the hangar to change and the instructors very diligently folded their parachutes. 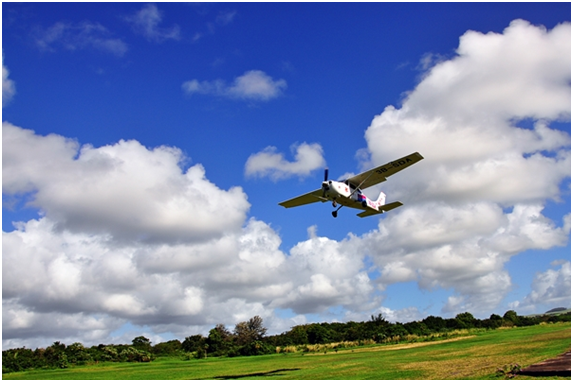 The experience in Shefali’s words, “Once we took off, the view was amazing. I could see the crystal blue sea, the magnificent lagoon and reefs stretching into the Indian Ocean and the spectacular countryside below. The instructors kept us pepped up with their antics, cheerful smiles and clicking pictures ensuring that all our emotions and expressions were frozen in time and all major events were recorded. We posed and kept our spirits elated. All of a sudden we were handed out goggles and as soon as we wore them it was time for the jump. Before I knew it we were out of the door and hurtling down the skies like a uncontrollable roller-coaster. I felt breathless for a moment and my heart was racing but then the twists and turns took away all the fears and the tapping of my instructor Chris on my shoulder brought me back to reality. I remembered to stretch out my arms to stabilise my position. He raised my head to take some pictures and that made my smile widen. My heart was beating wildly but I also felt a form of freedom that I have never experienced before. Maybe something that a bird feels every time it takes flight. It was simply exhilarating. After what felt like an eternity but it was just about 40 seconds, the canopy opened, and now it was a different experience altogether. Chris was quite whacky and performed some stunts gliding here and there. I could see the ground approaching and braced myself for the landing and we did so very easily and gently. Haaa!! It was all over too soon but the buzz in my head stayed for quite a while. What an incredible feeling. I am really thrilled with myself! Woohoo!!”

The memories of this will last forever, not only for the ones who jumped but for us as well and the video recordings and photographs clicked by the energetic instructors with a camera attached to their wrists is something that will be treasured and watched again and again. We chuckled and gasped and laughed when we saw the expressions and acrobatics. The passion for flying and skydiving was so evident here.

Adventure of a lifetime... No doubt about it!! And once in a life time opportunity to do a tandem skydive in one of the most spectacular island paradises in the world with a certificate to prove it.