Encounters Of The Wild Kind

In the past week or so, the news have been full of Cecil The Lion’s ghastly death and then rumours of his brother Jericho being killed as well. But then thankfully the latest news confirming that Jericho is indeed alive and roaming his park habitat in Zimbabwe.

Cecil’s death created an outrage among animal conservationists, prompted responses from politicians and many other ordinary citizens around the world. Interestingly, a number of celebrities who themselves indulge in big-game trophy hunting, publicly condemned Cecil's killing sparking a discussion among conservation organisations about a proposal for bills banning imports of lion trophies to the U.S. and European Union as well as discussions about ethics and the business of big-game hunting.

Unfortunately, we neither learn from past mistakes nor wake up to reality until it is too late. Most often than not, there is action taken only when things reach rock-bottom and various species make it to the ‘endangered’ list. How unfortunate it really is that those that went extinct are all because of our deeds and actions. Detrimental effects of poaching are leading to defaunation of forests, habitat degeneration, and reduction of animal populations in the wild.

This took me back to my recent visit to Mauritius where the ‘Dodo’ which was a flightless bird native to the island of Mauritius is now extinct thanks to mankind. The first recorded mention of the Dodo was by Dutch sailors in 1598. In the following years, the bird was hunted by sailors and the last widely accepted sighting of a Dodo was in 1662. On the positive side, it was heartening to see the Mauritian Wildlife Foundation and the Gerald Durrell Endemic Wildlife Sanctuary working closely with local and international partners in the conservation and preservation of the nation’s endangered plants and animal species. 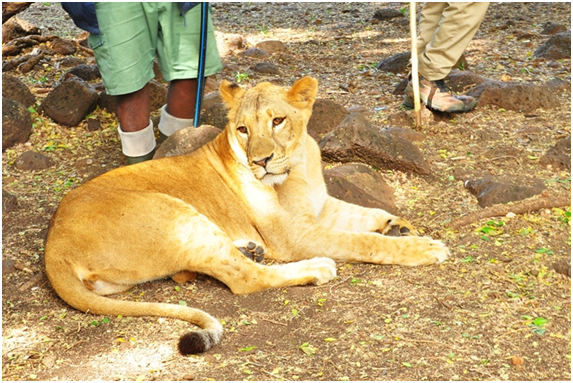 Mauritius is a haven for animal lovers. From exploring the lives of the giant tortoise, crocodiles and rare pink pigeons, seeing the Mauritius kestrel and endangered skinks to a day packed with adventure safari activities that involve an interaction with lions and cheetahs and a walk with them in the wild if you please. For me personally, a day spent at ‘Casela’ will always be a treasured memory. It was endearing to see clean, happy, well looked after animals in a secure and protected environment where their care was of utmost importance. The surroundings were spotless and the wardens very professional about the responsibilities they carried.

Out of sight down Rivière Noire road, lies 14 hectares of lush green which is now home to a big variety of fauna and flora. Some 1,500 birds, a selection of wildcats, zebras, giant tortoises, long-tailed monkeys, among other species, can be watched here on site. The park is a kaleidoscope of textures and colours, with its endemic dry forest section gently reminding us of the necessity to protect and preserve. What a great way to discover and unwind amidst Nature’s best!

For true fans, the best was to literally ‘Take a Walk’ on the wild side and get up-close and personal with the lion king through an encounter of a unique kind. Casela owns about 9 lions of three different generations and four cheetahs. These wild cats have been tamed with great care and affection so that you get the opportunity to come in direct contact with these amazing animals and enjoy the time you get to spend with them during your visit at the park. 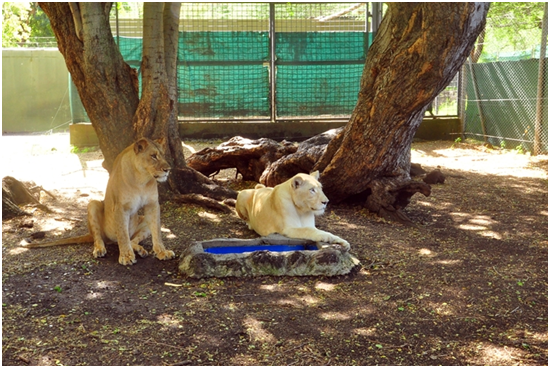 The game-wardens and handlers are very friendly and helpful and willingly give you interesting information about the behaviour and the work they do with the wildcats. For me, this extremely close contact and interaction with the wild cats was a very special experience and a rare chance of an intense, emotional 15 minutes where time stands still.

The guides give you a brief introduction and the important rules of behaviour to be followed during the visit. There is an age restriction as well as a minimum height requirement that is laid out. You have to leave all your belongings outside the enclosures but cameras are allowed and big smiles help... So say the wardens! They only arm you with plastic sticks that reach your waist and are to be held in the hand and not waved around and under no circumstances are you to bend or show your back or run....as if one would even think of doing that! One has to stick together – that part being easy as I am sure the thought of wandering alone in a lion’s enclosure is the farthest thought to cross anyone’s mind.

The interactions are of course conducted inside the enclosure under the supervision of professional guides. The handlers chat with you throughout and this is when the size and strength of the lions becomes abundantly clear as does their majestic and noble behaviour. One can only appreciate the beauty of the cats being this close and experience the rapport between man and beast. This one-on-one time is truly precious as you get to touch them... Yes, stroke their mane, ruffle their back which they love...run your fingers down their lovely, thick fur...and observe them play and interact between themselves.

It was an amazing experience of course...your heart thuds a few hundred beats per minute loaded with intense emotions. The white lion was absolutely bored to see us all and yawned a couple of times to show his lack of interest in us being there. The other one was momentarily distracted in the beginning and his gaze kept moving to some movement beyond the enclosure with him even cricking his neck sideways to get a better view with facial expressions that reminded me of my Labrador but this one was 10 times Pasha’s size and not one to be side-tracked easily.

The white lion, my daughter and I had a staring competition for a while...we were not quite sure as to who he was staring at...but naturally we lowered our eyes first for those piercing eyes were mesmerising but not exactly full of love. But I know now what it would feel like if one was to encounter this beautiful beast face to face in the wild. Majestic to the core but Ummmm... A tad bit scary too.

It is only when you leave the enclosures that you realise just how precious those 15 minutes were. The handlers crack a few jokes to ease the next lot of tourists waiting to get in. Questions from nervous visitors are bounced off with humour. My guide had a wicked sense of humour...and I walked away chuckling to myself with his parting shots of

“The lions have not been fed today... Their bellies are empty... Man, I think they are hungry!” And a nervous woman was told to chat with me as I had just escaped from the clutches of the ‘White Lion’... For the love of God, the woman’s expression was priceless and her face ashen till she saw my wide grin!

What haunts me even more now is the cruel fact that why would anyone want to harm and kill any of these majestic creatures...small or big? After all these are only nature’s blessings in various forms and size that need to be protected for future generations to enjoy and appreciate.