Pather Panchali, 60: 'So Much Of Bengal In The Film And Yet So Universal'

Satyajit Ray’s iconic Pather Panchali was released 60 years ago on August 26th in Basusree, a south Calcutta theatre that is still running. It is an iconic film that changed the direction of Indian cinema for all time. It placed Indian cinema on the global map in a big way, creating history. As a living tribute to its 60th birth anniversary, the Society for the Preservation of Satyajit Ray Archives commemorated this event on 30th August 2015 with a seminar at Kala Mandir, Kolkata. Though the main topic of the seminar was Indian Cinema: What Is National and What Is Regional, much of the discussion began with and was intercut all along with nostalgic accounts from the participants on their individual experience of and with the film.

The Society had brought together an interesting mix of speakers divided down the middle into– those who had a direct connect with Ray, and those who were not born when Pather Panchali was made and saw it over time. Among those involved directly with Ray were Sharmila Tagore, Aparna Sen and Dhritiman Chatterjee who moderated the discussion. The three actors made their debut in Ray’s films. The post-Pather Panchali group was represented by younger actors and filmmakers - Dibakar Banerjee, Shoojit Sircar, Nandita Das and Suman Mukhopadhyay who were not born when Pather Panchali came about. The only representation from the media was Dileep Padgaonkar, former editor of the Times of India.

The nostalgic flashbacks into Pather Panchali were so powerful that they almost overshadowed the debate around the main topic – what is national and what is regional which the packed audience also seemed to be more interested in. Sharmila Tagore, who made her debut in Ray’s Apur Sansar the last of the Apu trilogy said, “I was around nine when Pather Panchali was released. The film dawned on me much later. For me, Manik-da embodied the Bengali Renaissance. Aparna and I were too young to understand the significance of his creative genius. His value in our hearts, as a multi-talented artist and a good human being consolidated over time. There has not been a single year when there has not been some celebration or another of Ray. Los Angeles last year had houseful screenings of the Apu trilogy and the audience was as enthralled as we were so many years ago. This year, Chicago and Hamburg are celebrating Ray and his films. He continues to dominate our discourses and our cultural mindsets. When Pather Panchali was released, we were not allowed to watch films. But this was a film we were actually taken to. I remember the night of the thunderstorm when Sarbajoya was thrashing Durga and then she fell ill. ” 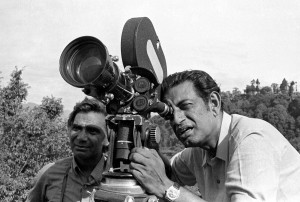 Aparna Sen said, “As my father was totally dedicated to the cause of serious cinema across the world, we were not allowed to see populist Bengali films like Harano Sur, Sagarika, etc. Suchitra-Uttam Kumar starrers were a big no-no. Whenever we appealed to father, he would say, -‘wait, Manik (Satyajit) is making a very good film’ and Pather Panchali was the very first Bengali film I saw. The scene that stuck in my mind is the snake that comes out of the hut after Apu and his parents set out to leave Nishchindipur. My father said it was a baastu shaap, a snake that is supposed to protect the family from danger. I remember crying through most of the film, I was so sad. There is something very universal about this film that is never bogged down by details and this struck me deeply. There is so much Bengal in the film and yet it is so universal.”

Dileep Padgaonkar had read about the film in Times of India in an article by Sham Lal, then editor of the paper. Sham Lal had written that Pather Panchali was a film that would rewrite the history of Indian cinema. “Many years later, when I saw it myself, I found it uncluttered by clichés generally indulged in by Indian filmmakers. But for the persistence of four or five critics, the film would have been consigned to oblivion at the Cannes festival in 1956. The names of two of these critics, Lindsay Anderson and Andre Bazin, appear in articles and books on Ray. But there were two others who played a crucial role to ensure the film's outstanding success. One was the film historian, Georges Sadoul, and the other, the chief curator of the Cinematheque Francaise, Lotte Eisner.”

Padgaonkar added: “Lotte told me in detail what transpired at the Cannes festival. For one thing, the film was shown at an ungodly hour. There were less than half a dozen people at the screening. One of them left barely 10 minutes after the lights were dimmed complaining loudly that he couldn't stand its slow pace. That was Francois Truffaut. Many dozed their way through the film. But the ones who were awake could not believe their eyes. Pather Panchali's freshness and purity, the absence in it of any kind of stylistic or technical flamboyance enthused Lotte. She clamoured for another screening and cajoled the sceptics to attend it. The film went on to win the special jury prize for the 'Best Human Document' which, in turn, persuaded Ray to chuck up a career in advertising and devote all his time and energy to films,” Padgaonkar summed up.

Of the younger brigade, filmmaker Dibakar Banerjee recollected that when he was in nursery or a bit higher up, the school had taken the kids to a screening of Pather Panchali and he remembers having slept off during the screening. Later, he got a book called Aam Aantir Bhenpu which was a children’s version of the original Bibhutibhushan novel. It was published by Signet Press and the illustrations were by Ray who was an artist with Signet then. The illustrations fascinated me even as a young boy. Ray had done the sketches much before he made the film. When I watched the film many years later, I found it very entertaining and also visually beautiful,” said Dibakar.

Shoojit Sircar one of the most successful filmmakers in Bollywood cinema today who has begun to produce Bengali films also said that his father had taken him to watch Pather Panchali much against his wishes when he was a boy. “This was in 1975-76 and we went to Radha talkies in Kolkata. I probably slept through the film. Then we shifted to Delhi when I was in Class X and we were made to watch the same film again. Most of the boys, including yours truly, walked out. Years later, when I was working in theatre, Siri Fort had organized a screening of Pather Panchali. It was the last show of the day and I expected not more than 10 to 15 people. I was speechless when I found that the large auditorium at Siri Fort was jam-packed with people. The experience of watching the film numbed my senses in a way, I was so enamoured by it. The film opened a new chapter in my life. I try to copy Ray in my films in ways you would not know but I know what I have copied from him,” he summed up amidst laughter.

The discussion then veered awa to the blurring lines between national cinema and regional cinema in the changing ambience of technology that has reduced the world to fit into your cell-phone and Pather Panchali made a quiet and dignified exit leaving memories behind to take home.