The digitalizing of cinema has slowly and steadily weeded out films on celluloid be they on 8mm or 16mm or 35mm. But this was bound to happen digital or no digital because celluloid not only has a brief life but is also highly inflammable and calls for very rigid infrastructure for preservation and sustenance. What happens to classic Indian films on celluloid that have stood the test of time in terms of audience reception and nostalgia and archival value but not in terms of durability? Is there a restoration programme in process? Yes, there are several people and organizations at work to restore films threatened by extinction.

“The credit for this international movement towards restoration of damaged, ‘lost’ and old films was set in motion by internationally renowned filmmaker Martin Scorcese. He stopped making films altogether to concentrate on the restoration of old, damaged and lost film prints. He set up the World Cinema Foundation and different organizations across the world are contributing to this movement” said filmmaker Mrinal Sen when he was specially invited to attend the screening of a restored version of Khandhar in 2010.

Film preservation is a key process because films have organic components, which, like all organic material, are prone to decay. Poor storage and handling take a further toll on them. When exposed to heat and humidity, films deteriorate rapidly — a process that is hard to reverse. Attention must also be paid to a film’s “micro environment” or the condition inside a film can. Films stored in humid conditions can become a host for mould, mildew and fungus that will soon damage it beyond repair. 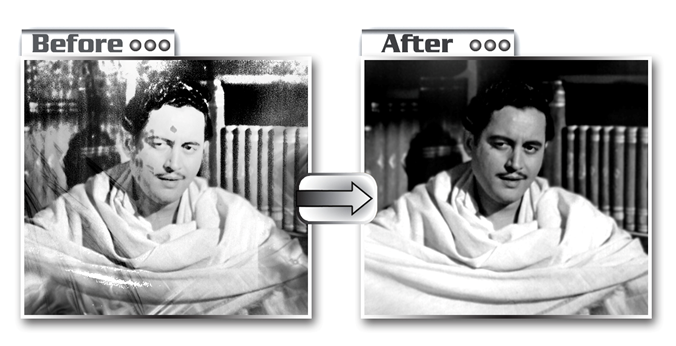 FTII alumnus Shivendra Singh Dungarpur whose documentary The Celluloid Man has drawn International attention, must take credit for bringing this movement into India. He set up the Film Heritage Foundation in Mumbai last year. He is a patron of the British Film Institute and a donor for the restoration of Hitchcock’s silent classic The Lodger. He also facilitated the restoration of the Indian classic Uday Shankar’s Kalpana (1948), done by Scorsese’s World Cinema Foundation that was premiered in the Cannes Classic section in 2012.

“The idea for the foundation was born because I realised the dire need to preserve India’s cinematic heritage that has been severely neglected for all these years. We have lost a significant part of our cinematic history and this will continue to happen if we do not take immediate steps to save this legacy,” says Dungarpur about his non-profit organization. The foundation is dedicated to supporting the conservation, preservation and restoration of the moving image and to develop interdisciplinary educational programmes that will use films as an educational tool to create awareness about the language of cinema.

“As one of the first initiatives, we curated a package of Indian films and newsreels entitled The Golden ‘50s: India’s Endangered Classics screened at Il Cinema Ritrovato festival in Bologna, Italy from June 28 to July 5 2014 in collaboration with the National Film Archive of India (NFAI) and the Films Division,” Dungarpur elaborates. The idea was to showcase India’s unique cinematic heritage and to create awareness about the urgent need for its preservation and restoration. Most of the original negatives do not exist and what survive are dupe negatives and prints in poor condition. 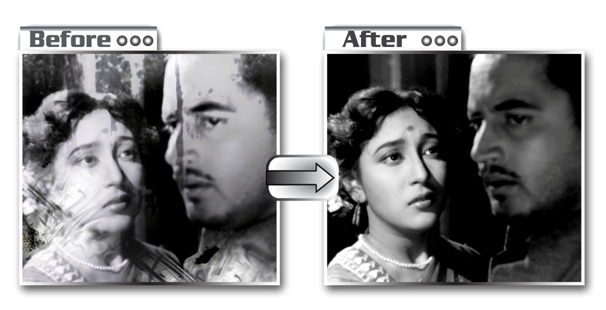 Purab Gujar of Cameo Media Laboratories, Pune, a private body that also undertakes the preservation and restoration of films, points out, “In the US and the European countries, the cold climate helps to protect films from damage. Besides, their technological and economic superiority also allows them to preserve films better.”

The latest to enter the fray is Ultra Media & Entertainment Pvt Ltd.. Pyaasa, a cult classic by Guru Dutt is the only Indian film restored by an Indian company – Ultra, for a world premiere in the competition section at the 72nd Venice Film Festival this month. The firm had 45 experts working round the clock for over four months to restore and bring back the film to its original quality and showcase it globally. Pyaasa will compete with 20 other prestigious restored films from all over the world for the coveted “Venice Classics Award” for the best restored film.

Ultra Media & Entertainment, who are the negative rights owners of Pyaasa that has sustained its popularity and its fame in terms of the story, the mesmerising cinematography, the music, the lyrics, expressing and manifesting different avenues of a man’s life whose love for composing poetry overshadows everything else and he is sucked into his own creativity which raises him and then destroys him.

Mr. Sushil Kumar Agrawal, CEO, Ultra Media & Entertainment Private Ltd. about this film and its restoration said that the popularity of the film across the global Indian audience cannot be overstated. The four months long and arduous work to correct the negatives frame by frame and restore to it its original quality has been redeemed through the fulfillment of the mission of opening out the film in its original and glorious form for the global audience at a prestigious film festival like Venice.

The most challenging task once the rights were acquired was sourcing the authentic materials to complete the preservation. After much effort, Ultra found the original camera negatives of the film at an archive in India, However, many parts of the negatives were either damaged or lost. Ultra decided to use as much parts as possible from the original Camera Negative and a few parts were used from 35mm prints. A new digital transfer was created in 2K resolution on the ARRISCAN film scanner. This in-house technology of UltraStudio & Digital Lab (a division of Ultra Media & Entertainment Pvt. Ltd) helped in applying a multidisciplinary, data-centric approach to the entire film’s restoration process.

Then followed the restoration process, the most challenging of them all. Innumerable instances of dirt, lines, scratches, splices, warps, jitters and green patches were manually removed frame by frame under careful supervision by experienced artists/ In-house professionals used a specialised film content-mending and defect removal mechanism in the process of repairing, carefully selecting the best way to restore the priceless classic to its original glory. The original monaural soundtrack was remastered at 24-bit from the 35mm optical soundtrack. Clicks, thumps, hiss and hum were manually removed frame by frame at the sound studio of Ultra Media & Entertainment .The film will be presented in its original aspect ratio of 1.33:1

In the past, Ultra has restored Indian classics like: Chori, Chori, Half Ticket, Paighaam, Insaniyat, Dil Tera Deewana, and many more. These restored films are ready to be screened globally. Ultra also holds negative rights for some of the prominent films of Raj Kapoor, Guru Dutt, V. Shantaram, Homi Wadia & studios like Filmistan, AVM, Gemini etc.

“Films are a part of our cultural history. I was shocked to discover that of the 1700 silent films were made in India of which only 9 survive thanks to the efforts of Mr. Nair. He travelled to remote parts of India to collect and save cans of rare films. The fact that Dadasaheb Phalke is recognized today as the father of Indian cinema is Mr. Nair’s doing. He was truly democratic as an archivist trying to save any film that he could get his hands on be it world cinema, Hindi popular films or regional Indian cinema. He even took world cinema to the villages of India,” Dungarpur sums up.