The least that Sandeep Kumar, Austrian filmmaker of Indian origin could do for unaccompanied teenage refugees pouring into Vienna was to introduce them to Bollywood music.

Weeks of rehearsals culminated in a flash mob performance last Saturday on Vienna's elegant Mariahilferstrasse, a two km long shopping street in the heart of the Austrian capital. Life came to a standstill on this commercial street as over 300 teenaged refugees mostly from Afghanistan, Iraq and Syria inspired pedestrians to dance to popular Bollywood numbers like jhoom barabar jhoom, jai ho and dhoom machale sung in Arabic.

The slight autumn drizzle only added to the fun of dancing in the rain.

Amongst those cheering the dancers were Maria Vassilakou, Vienna's vice mayor and Josef Hader Austrian comedian, actor, and writer. 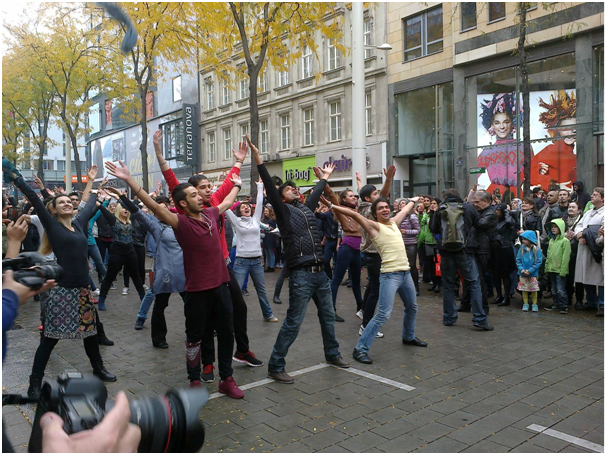 Sandeep is the producer of two Austro-Indian films and first met the refugees a few weeks ago in a Vienna coffee house where he had worked on a film script. That day a small group of teenagers had walked into the same coffee house to occupy an adjoining table.

“I overheard them talk to Sonia, a local social worker and could not help but join them,” Sandeep told TheCitizen in a telephone conversation.

Sonia is of Arab origin and she was happy to introduce the teenagers fleeing the war in their respective countries to Sandeep. The stories that Sandeep heard from the teenaged refugees broke his heart. He wondered how he could get the youngsters to smile again. He decided to introduce them to Bollywood music in the hope that it would make them happy. The teenage refugees told him that they had travelled for weeks by land to get to Vienna. On the way some of the teenagers as young as 14 years old were abused by criminals. Some human traffickers harassed, manhandled and drugged them. A few of the teenagers were so traumatised that they had tried to commit suicide on reaching Austria.

“This one time experience of meeting with the youngsters gave me sleepless nights. I decided not to be a mere spectator. I wanted to do something for those who are running away from war torn countries. Being a filmmaker who has made two Austrian Bollywood movies, it was clear that Bollywood could make the young refugees happy and help to bring colour back into their dark life,” adds Sandeep.

And Bollywood did. The first rehearsal was held at one of the many refugee camps in Vienna and the children danced their heart out to the music, refusing to stop even after hours of practice.

To make the flash mob happen Sandeep got together with Roman Svabek, whose students invariably inaugurate the prestigious Vienna Opera Ball every year and Domenika, a local choreographer . Together they choreographed a six minute flashmob in the name of peace and unity.

“Rehearsals were also held in Roman's majestic dance studio in Vienna's imperial first district,” said Sandeep. Roman was so inspired by the idea that he joined in the dancing and has offered to take Ahmad and Fares the two 17 year old Syrians who lead the flash mob dance as his students.

Roman promises to teach the two to waltz professionally, free of cost.

Another dancer is 23 year old Lara who was eight when her parents brought her to Vienna from Lebanon. She was shot in the head by a gun man and was in a coma for weeks. Today she has recovered and is a social worker. She is crazy about Bollywood dancing and joined Sandeep also as team coordinator and Arabic interpreter despite the fact that she is half blind.

The dancers were dived into small groups and were given dance lessons with the help of interpreters also in Farsi and pashto before they came together to explode into a riot of music and dance that surely lightened the plight of refugees.

Austria has already admitted thousands of refugees from the Arab world most of whom are on their way to Germany.