Welcome To The Circus!

Welcome to the Circus Directed by Courtney Coulson

A new documentary film aims to celebrate the Palestinian pursuit of happiness in spite of Israel’s occupation.

Focusing on the Palestinian Circus School in the occupied West Bank city of Ramallah and filmed entirely by the director Courtney Coulson, Welcome to the Circus documents a month-long visit to the school from members of the LIDO Circus School in Toulouse, France.

Coulson lived with the performers during this period, so the result is an intimate portrait of their day-to-day experiences. From the stunning aerial view of Ramallah that opens the film to the depictions of Palestinian landscapes and the physical agility of the performers, the sheer beauty of Palestine and its people comes across in vivid color.

The LIDO school performers are quickly acquainted with the realities of the occupation. 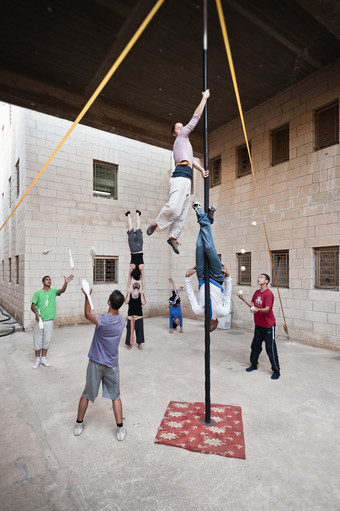 A production still from Welcome to the Circus.

“We live a special life,” one of the Palestinian students explains.

“You have no control over anything you do,” adds another.

“I feel like I’m in a big jail,” still another tells one of the French students.

The visitors take a tour of the checkpoints — witnessing the daily humiliations Palestinians face there — as well asIsrael’s illegal settlements and the separate access roads the settlers enjoy.

And then, of course, there’s the omnipresent wall, which, at least on the side Palestinians see, has been so decorated with joyous acts of artistic rebellion that a viewer almost comes away with the feeling that the other side of the wall, the sterile gray side, must be the one that contains the real prisoners.

At an early meeting between the two schools, Fadi, one of the founders of the Palestinian Circus School, asks what will happen if they don’t get permits for the Palestinian students to travel to Jerusalem for their scheduled performance.

Jessika, the school’s program coordinator, explains that only one student holds the blue ID card of a Jerusalem resident; all the others possess the green ID card of West Bank residents.

The meeting also raises the question of the purpose of the performances. Marah, a Palestinian student, says she believes people will attend because “they want to have fun, to be happy.” 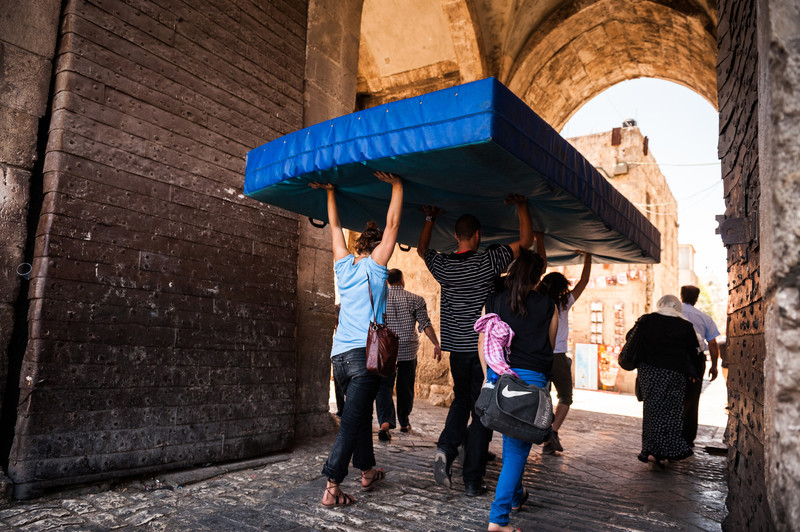 Prodcution still from Welcome to the Circus. Milan Szypura

The three weeks of training seem to go by quickly. The film’s director is not attempting to create a Hollywood-style narrative that depicts a struggling group of performers transforming themselves into a jubilant success story.

It quickly becomes clear that this is not Cirque du Soleil or Ringling Brothers and Barnum & Bailey. The LIDO School itself operates on a shoestring budget and the circus routines are acrobatic and low-key, designed to amuse small children.

And when the performances begin, the students of both circus schools perform in the West Bank cities of Ramallah, Nablus, Hebron and Jerusalem.

It is clear that Marah’s goal is achieved as more than 2,500 people attend the show in Nablus. The children’s excitement becomes infectious for the adults as well.

A dramatic moment comes when it is announced that one of the Palestinian students has been denied a permit to go to Jerusalem because he had been arrested and jailed for throwing stones as a youth. The reaction among the French students is gripping — and it is quite apparent that during the three weeks of training, strong political connections were made.

As the bus leaves Ramallah for Jerusalem, with that student left standing on the side of the road to watch its departure, he still regards the circus’ performance in Jerusalem as a victory.

“It means we have a country. We have a homeland. Palestine has not disappeared,” he says.

Welcome to the Circus, beginning to be screened at festivals, would be an ideal film for educators to show in classrooms to teenagers and younger audiences.

It is a modest documentary about a modest group of people with a modest goal: to make people happy. The pursuit of that goal happens to be a fundamental human right.

(Rod Such is a former editor for World Book and Encarta encyclopedias. He is active in the boycott, divestment and sanctions movement.)