It was April 1986. Mr C Pant- a resident of Bhimtal, a small station twenty Km downhill from Nainital -got three bagged saplings of Avocados from Australia. He has a century old orchard round his hoary parental house at Bhimtal and as for his obsession for plants, he claims to have inherited it from his ancestors. His father was a pioneer in introducing Litchis in this region from far off Darbhanga. He still has the oldest trees of it in his orchard. Pant planted these Avocados in a stony and least fertile patch of his garden where they once had the stable for horses. Of these three saplings planted, one was consumed shortly by a stray cow and of the remaining two, as luck would have it, one turned out to be Hass and the other Alligator or Pear Avocado- supposed to be one of the best of their genre. These two trees, around thirty years old now, produce over a thousand fruits each per year with an average weight of 250 to 300 gms.

Pant, now a nonagenarian, invariably consumes an Avocado a day in his breakfast from the month of Sept to May-June. He informs that these fruits may be plucked as per requirement or in later months the windfall gathered and shelved for a week or so allowing them to be ready for consumption. Despite the age and replacement of both of his femur balls due to an accident six years back, Pant has no sign of physical decay or senility. As a routine he still walks in his garden with his dogs, feeds the goldfish in the pond at the centre of the lawn, prunes the flowering plants and does all his personal work without any assistance. He gives much of the credit for all this to his twin fruiting Avocados.

Avocados are absolutely new fruits for the Central Himalayas known otherwise for apples, peaches, plums and apricots etc. There is hardly any awareness with regard to the exceptional nutritious value which has aptly earned for it the sobriquet- “The best gift from the new world”. Even its name is not that common here and for the handful of growers in Jeolikot region near Nainital it is just “Makkhan Ful” as it is quite rich in fat contents.

It will be of interest here to share a story related to Avocados from Almora, an ancient town in Kumaon Himalayas. An Avocado seedling was planted just casually by a tenant of some Joshi family in their kitchen garden in the Jakhan Devi locality of the town, decades back. Long after that tenant was gone the tree gave its first fruit. The Joshies had their doubts about its being an edible stuff. So the fruit, after much deliberation was cut exactly into the number of pieces equal to the members in the family and after a quick 1-2-3 all the members gulped these pieces together –ensuring that if anything untoward is to happen it would happen to the family and not to an individual.

Despite its successful cultivation in the region Avocados haven’t yet been able to carve a niche for itself in the fruit basket of the Central Himalayan Hills- probably because of its taste that is somewhat closer to a strange mix of the yolk of boiled egg and kernel of walnut. The climate of this region is quite conducive for growing this fruit and taking its extraordinary nutritional value to account it can safely be assumed that it has the potential of becoming the Poor Man’s Tree i.e. a tree that without demanding much can provide to the malnourished hill folks all that is needed for living a healthy and disease free life.

In the initial years of the previous century this fruit from the Tropical American region sneaked into South India via Sri Lanka. Its commonly grown varieties called Purple and Green were introduced in India in 1941, again from Lank. Presently it is being grown in the isolated pockets of Kerala, Maharashtra, Tamil Nadu, Karnataka and the hilly regions of Sikkim. It has high nutritional density, is a source of protein, fiber, major antioxidants, It helps in stroke prevention and is used as a baby food.

A single fruit of Avocado contains about twice of our daily needs for vitamins C, E, and beta-carotene as its calorie proportion. Rich in copper and iron, the twin mineral constituents of antioxidant and enzymes, it has the highest potassium rates in tropical and non-tropical fruits and vegetables. A benefit of potassium is a 40% reduction in stroke risk and around 400 mg of potassium is supplied by less than half of an avocado. They are the only fruits or vegetables, which contain monounsaturated fats, essential for proper growth and development. They maintain good cholesterol and reduce the bad one. One half of a Hass Avocado contains a significant percentage of the daily nutritional needs of children between 7 to 10 years of age.

Hass, Fuerte and Green varieties are promising for the central Himalayan hills. These varieties are being grown in Sikkim where the soil is deficient in nitrogen, zinc and boron. There the trees are fed with manure and micro nutrients as a routine to compensate the said deficiency. The soil in the Uttarakhand Hills of the Central Himalayas has no such limitations. Mr Pant tells that till date he has not applied any manure, farm fertilizer, pesticide or even watered his twin trees. Showing twenty odd saplings planted along a sloping ravine in his orchard he says that he might have to water these for two three years because they are planted in a rocky slope. “It otherwise is a classical case of just plant and forget” he says.

The liking of Avocado for the soil ph ranging between 5 to 7; altitude between 800 to 1600 meter; average rainfall around 2000 mm; temperature between 10 to 30 degree Celsius; its dislike for the hot and dry winds of North Indian plains; water logging and improper drainage are a few factors which make the river valleys and hill slopes of the Central Himalayan Hills an ideal choice for growing an exotic fruit like Avocado without any hassle. Interestingly, Avocados become mature in Uttarakhand hills in Sept and continue till May-June. In southern India the crop is exhausted in July- Aug and in Sikkim in October itself. There being no organized marketing system for it in India Avocados are available only in big Malls or with the state of the art green grocery stores in metro cities where they are sold for Rs 300 to 450 per piece.

It is grown in India through seeds only, though at fruit research station Kallar in Nilgiri hills layering and inarching has also been tried out successfully. In West Bengal clip budding has been done successfully. All India Avocado Producer Association- a Nasik based recently organized body -has been trying hard to develop it through tissue culture and get improved germplasm from abroad.

The Central Himalayan Hills, where the possibilities of Avocados becoming the household nutrition security are very bright, are absolutely oblivious of these developments. The Horticulture department here has yet not heard of it and the University of Pantnagar is said to have planted a few saplings recently to see the potential. A good soil binder, it is capable of changing the speedily deteriorating health scenario in the hilly regions of the Central Himalaya. The need is there to make the hill people aware of this most important contribution of the new world to human diet and develop consumer preference for it.

Chemical Composition of Avocado Fruit (per 100g of edible portion) 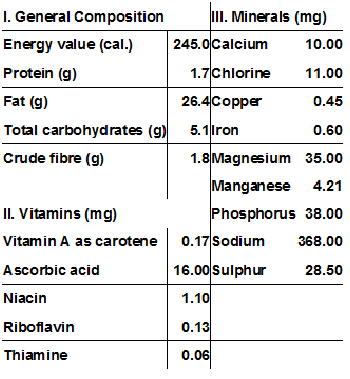