In June 2002, a Pakistani woman from the impoverished village of Meerwala was raped ordered by a local clan known collectively as Mastoi as the punishment for indiscretions allegedly committed by the woman's brother. While certainly not the first account of a female body negotiated for honour in a family, and (sadly) not the last, journalists and activists were captivated. This time the survivor had chosen to fight back, and in doing so, single-handedly changed the feminist movement in Pakistan. Her name was Mukhtar Mai, and her decision to stand up to her accusers was an act of bravery unheard of in one of the world's most adverse climates for women.

The play, Hum Mukhtara is based on Mukhtar’s life but it will not be an exact portrayal of her life because neither this was the first nor the last case of a women being subjected to indiscreet attitude of the society. The growing violence and callous attitude of the male dominated society should be brought to a wider spectrum of our world and that is the guiding spirit of this play.

Usha Ganguly, founder-director of Rangakarmee that has completed nearly four decades in theatrical performance in Hindi, says, “My teacher Maitreyee Sengupta presented me with In the Name of Mukhtar Mai which is on the life of Mukhtar Mai. I was amazed by the extra-ordinary courage and strength of purpose shown by an ordinary girl from a remote village in Pakistan. When I read the news that the accused had been acquitted, I was shocked beyond words. I decided to portray the life of this brave girl for the Indian audience everywhere where many Mukhtar Mais are still suffering from brutal torture and injustice at the court of law but either are not aware of their right to fight back or are too afraid of the consequences to fight back.” 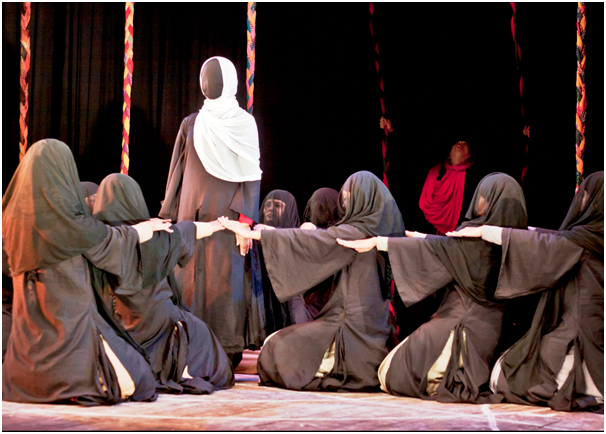 The first performance of Mukhtar Mai happened in Kolkata in January 2013 in celebration of the 37th anniversary of Rangakarmee. Since then, the shows are ongoing in different cities of the country raising consciousness among the audience. “I do not seek revenge, I am not cowed down by terror, all I seek is justice,” says Mukhtara again and again, echoing the angry voices of the women who are still crying out against the gang-rape and killing of Nirbhaya in Delhi. Mukhtar Mai is a woman unto herself. She is also a symbol who represents all women across the world have been victimised by violence not only through rape but also by the legal and judicial system of a country dominated by patriarchy. In this sense, Mukhtar Mai is an institution.

The play opens with a group of young women dressed in black, led by an older woman who doubles up as anchor and leader and spokesperson of the group. These women are like the Greek chorus, dressed completely in black through the play with their faces covered completely in black to suggest at universality of the woman’s ‘blackened’ face for no fault of her own. The mask slips off to show their real faces, sometimes as women per se, sometimes as protesting women, and sometimes as mothers symbolised by the puppets they hold in their arms. A Greek chorus is a homogeneous, non-individualised group of performers in the classical plays of Greece, who comment with a collective voice on the dramatic action. Each member in this chorus symbolises Mukhtar Mai yet, often, a single young woman breaks away to face the audience and become Mukhtar Mai demanding justice. The use of the mask is not for impersonation or disguise but to emphasise the invisibility of women.

The anchor-storyteller-leader of the group keeps voicing the kinds of violence – emotional, physical and social that women are subject to. “Do not go there; do not do this or wear that; you are attacked because you are covering yourself and you can be attacked if you dress differently. They see wrong in everything you do, every word you utter. Why must women bear with all this, tell us?” she asks, chorusing the voices of all women everywhere. 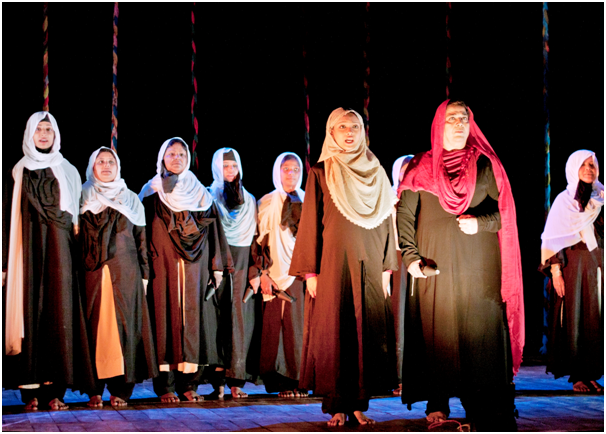 Mukhtar Mai did not take the escape route of suicide. She took her case to court in September 2002 and inspite of losing each time she went to the Supreme Court which acquitted even the last rapist in 2011. Mukhtar Mai may have lost her case but she made an example of herself for her Pakistani sisters and for all women across the world of sticking to the demand for justice instead of revenge. Her decision to face her accusers on a public platform was unheard of in an environment that holds a woman’s value as half of that of a man.

She single-handedly triggered a women’s movement in Pakistan and now, Mukhtar Mai Women’s Organisation (MMWO) founded in 2003 is led by Mukhtar Mai. Today, it is the champion defender of women’s rights and education in the Southern region of Punjab Province, Pakistan, a region with some of the world’s worst examples of women’s rights violations, such as rape, gang rape, domestic violence, honour killing, vani (exchange of women in settling the disputes), forced and child marriages. Alongside advocacy and awareness campaigns, MMWO provides legal & paralegal and paramedical aid and shelter to approximately 500 survivors of violence annually through Mukhtar Mai Women’s Resource Centre & Shelter Home.

The use of props like masks, puppets, lanterns, the odhni in the scene where the Mastoi girl tries to seduce Mukhtara’s kid brother and then accuses him of trying to molest her, are strategically used props that enrich the tapestry of the performance. The chorus returns with their faces covered in black in the end, but the masks are removes revealing their faces mute in protest but loud in their anger. The black backdrop tends to make the women invisible to the audience but perhaps this is done by design – women are socially conditioned to remain ‘invisible.’

Hum Mukhtara is a strikingly original presentation that encompasses many forms of theatrical performances to narrate a single story. The acting by the chorus and Usha Ganguly and the men is amazingly credible despite the underlined stylization. The title Hum Mukhtara directly speaks of the Mukhtar Mai hidden in all of us, waiting to come out.