Swaying soulfully, Sahil Vasudeva plays the piano with all his heart and soul. You are naturally drawn towards the sound. In a room full of music books, piles of sheet music and a formidable piano, the sound of the music rising and falling is mesmerizing. The love for arts, music and literature took on a whole new meaning as Sahil found it in the piano.

Opus is the solo project of Sahil Vasudeva that is based in New Delhi. A classically trained pianist, Sahil Vasudeva is one of the few musicians in India who performs western classical music. His current repertoire includes composers such as Mozart, Beethoven, Chopin, Schubert, Tchaikovsky, Clementi, Ravel, and Schumann, as well as his own compositions. In addition to live performances, Sahil has also composed and scored for independent films, TV commercials, corporate films, art installation, and performance art.

Sahil is a certified pianist (with distinction) from the prestigious Trinity College of London Board and trained in classical piano at Denison University, Ohio, USA and wishes to revive the art of solo piano performance, share the depth and his passion for classical composition. He wants to make classical music more relevant, accessible and less exclusive. He does this in collaborating with other mediums such as photography, film, design, light, and poetry. Sahil has already collaborated with photographers - local and international on 4 pieces. He also attempts to make it more relevant by performing in venues outside the recital hall or auditoriums or venues not traditionally meant for classical music and takes it to the local bar or coffee shop. Sahil says, “That this is the only way more and more people will hear this music. The idea is to break the traditional norms for engaging with classical music.” 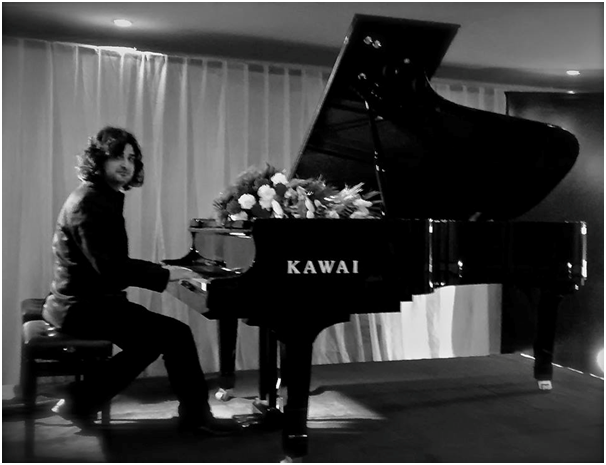 It all started when Sahil’s mother transported a baby grand piano from Mussoorie to Delhi when he was a child. His earliest memories of the house begin with the piano. “An instrument of that size and aesthetic just commanded attention,” recalls Sahil. He remembers casually hitting keys as a child and when he was about 7 his mother put his brother and him into classical lessons through private teachers. Closer to his teens, Sahil remembers going for his lessons but really wanting to learn rock ‘n’ roll. Sahil says, “Every teen goes through that phase since classical music is considered quite geeky.”

During this time, he distinctly remembers his mother coming back with a huge CD collection of western classical music from her visit to the US. She would play them first thing in the morning and so Sahil had his initial introduction to a Tchaikovsky or Rachmaninoff piano concerto. He found that he enjoyed the music and thought it to be quite powerful even at that age. “I attended possibly every cultural event in Delhi with my Mom so the exposure was enormous,” he mentions but he never geared himself towards actually playing the piano/music as a career. It was purely for learning and appreciating the arts.

At the age of 26 came the realization that music was indeed his passion as opposed to a corporate job. It was a tough decision but which Sahil took with determination and purpose as this was also an extremely late age for an instrument like the piano. He has now been training seriously for the past 3 years.

On asking Sahil why he finally chose the piano and more so why classical music, this is what he had to say: “There isn't an instrument that matches the tonal quality of a piano. It is versatile - it can do classical, jazz, blues, rock ‘n’ roll, pop - and it is a complete whole stand-alone instrument. For me, the ultimate performance is still for solo piano. I think the nervous system is most active while playing the piano as you use both sides of the brain, body, feet, memory and the mind is extremely active. For me the piano is an intersection between sport, art, and craft and that is what I love about it. And as for why I chose classical music? I think it has more depth and higher quality of resonance. It has the ability to affect you, both physiologically and psychologically, and that's why it remains with you much longer than another piece of music. The genius that lies in the compositions and the structures is fascinating. I do not think the composers of today put as much labour or can match that level of composition or harmonic style. I do think it is a much smarter (without sounding arrogant!) form of music to engage with! As a performer or player of classical music, I think it is extremely challenging.”

Sahil stresses that there is no other feeling that comes close to first learning a complex piece, seeing the process develop through relentless hours of practice, and then finally being able to play the piece which you have grown to love - the reward and gratification is infinite - that's what you play for. “You have to be prepared to drive yourself to the extreme getting the notes, the phrasing, the intonation, understanding of the piece accurately and then adding your interpretation to it. It is at that point when you are able to play freely, when you have managed to immerse yourself in that piece of music - reaching that point is probably what you play for.” He has a dedicated routine that involves working of his muscles, finger movements, exercises, and concentration every day.

There are endless challenges of course - no infrastructure, no conservatory for training, very few dedicated and exceptional teachers, no venues to perform, no real audience or listeners, in addition to the notion that Indians cannot truly play western classical piano. “You really can’t only work as a performer as you have to do everything - build the ecosystem, engage the listeners, at the same time keep working on your craft - the challenges, in India especially, is unending!”

Sahil loves to perform wherever he gets an opportunity – be it an auditorium, a restaurant, a cafe, a bar, a festival... He’s played at all! He likes an audience that is willing to engage and give it a chance - he narrates anecdotes on the composer, the significance of the piece and contextualises the music for the Indian listener with cultural nuances they can well understand. People distract him and can be noisy. We live in a hurried and harried world...attention spans are shorter...people are impatient. But Sahil is convinced, “If you allow classical music an opportunity, it will have an impact on you.” He has enjoyed playing the most at the NCPA in Bombay. “It is one of the best venues in the country and they have a piano of soft melodious tonality.”

Sahil is also an ongoing artist in residence at Vana Retreats in Dehradun. It is a wellness retreat with some of the finest services - from spa to culinary. There is no compromise on quality and it is a marvel of architectural design. He plays for the guests who stay at the wellness retreat and enhances their experience by contributing classical music to the space, given its soothing and calming impact on the mind. He also does workshops with the guests. As part of the residency he uses the serenity of the retreat to compose and work on his own music.

Sahil’s vision is simple and beautiful. He would like to create an ecosystem for listening and do it locally, with a local performer, not a visiting European pianist. It would be great he says if he can put together an active listening community in India and have enough curators who can host these evenings. The aim is to take classical piano to tier 2, tier 3 cities in India - to expand the outreach and to share with his listeners the passionate beauty of the music.

You can find Sahil's music on: https://soundcloud.com/opusindia