Dev Anand And His Teen Deviyan

The Romantic of all times

NO other celebrity in the Hindi filmdom did match, or even came near to Dev Anand’s outstanding career span of six decades. During these eventful 60 years, Dev Anand played a variety of roles; he was an iconic hero, an enterprising producer and a reasonably good director. But it was as a debonair and romantic hero that Dev Anand created a niche for himself in the movie industry and won the hearts of millions of his fans, especially the female of the species.

Romance was the very quintessence of Dev Anand’s persona. No wonder he had titled his autobiography “Romancing with Life”. That was exactly what his life had been, both on and off the screen. Undoubtedly, Dev was then one of the handsomest men both in real and reel life. Women, regardless of their age, would unabashedly swoon over the debonair Dev that gave him an added touch of narcissism. For Dev, romance and flirting were two sides of the same coin. Flirting was his pastime that he had perfected to a fine art and played it with a finesse that would be the envy of even a connoisseur.

Dev Anand had learned the game of flirtation quite early in his life. As a college student in Lahore’s famed Government College, he was much desired by his female contemporaries and he would flirtatiously respond to their gestures. There was a beautiful young girl named Usha who frantically ran onto the Lahore railway platform trying to board the Frontier Mail that was taking Dev Anand to Bombay on his journey of no return. “Hold my hand! Hold my hand! I want to come with you!”, she was shouting in vain as the train moved faster and faster, leaving behind the hapless girl crying. Then there was one Florence in Gurdaspur who one evening literally chased Dev and thrust a passionate kiss on his lips. He then, as also later, was too shy in expressing his love; he blushed and ran into her mother’s kitchen for a hot meal. They were not the only heartbroken girls whom Dev left behind; there were many more yearning for him.

Bombay provided Dev Anand a much larger canvas to fine-tune his art of flirtation. There were more women than men in the Censor office in Bombay where Dev Anand had found a temporary job as a clerk during World War II. There too, he practiced his art of flirtation albeit with greater finesse and received instant response from his female colleagues. For Dev, flirtation was an innocent pastime, nothing more and nothing less; a playful game sans any serious intention. 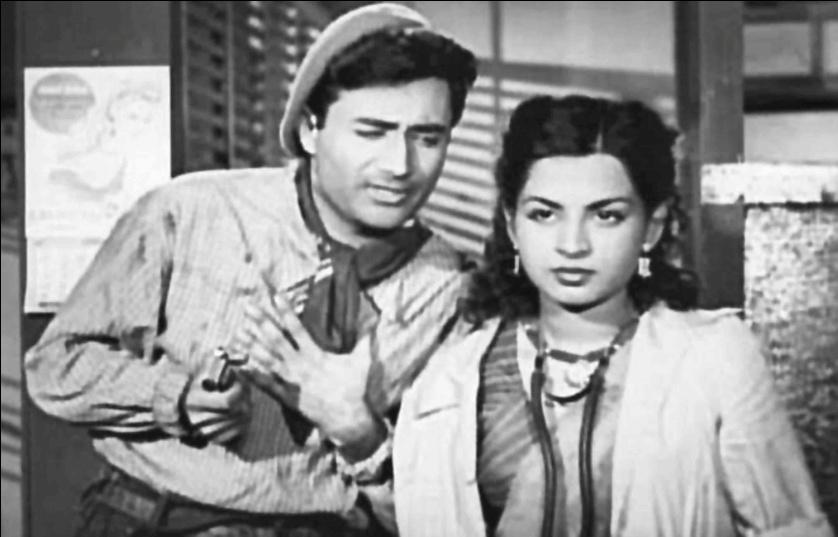 There was nothing to shout about in his first movie “Hum Ek Hain” released in 1946. However, it was in 1948 that Dev Anand got a big break in Bombay Talkies’ Ziddi with Kamini Kaushal as his co-star. Both Ziddi and Dev Anand caught the attention of the discerning cine-goer. It was Ziddi that kick-started Dev’s movie career in Bombay. In 1948, Dev was cast opposite Suraiya in Vidya. Suraiya was then a huge star and Dev stood almost at the first rung of the ladder to stardom. It was at its shooting in 1948 that the two met for the first time. He was somewhat nervous yet confident. The very first scene to be shot that day was an amorous one with Dev kissing Suraiya albeit on her cheek and she hugging him from the back. Her coquettish demeanor was inviting enough and the two afterward conversed like a lovey-dovey couple. Dev was at his flirtiest best that day, with Suraiya responding shyly but with come-hither giggles.

Neither Dev nor Suraiya had imagined that their flirtatious cameo that day would soon turn into a serious love affair. The duo acted together in seven films in the following three years; all the pictures were big hits. In the year 1949 alone, they had co-starred in three movies. With each movie, the two came closer and closer despite the watchful and suspicious eye of Suraiya’s granny. “There was not a single day when Suraiya and I did not meet or talk to each other on the phone. I was in love. Not that I hadn’t fallen in love before. I had been physically and emotionally involved before, and had my share of love-affairs. But they were with women already married, with a past of their own. This time it was as if two eligible beings, suited for each other, had got together, lighting a torch for young love, openly in the public eye, with the approval of their admiring fans,” confessed Dev Anand in his autobiography. 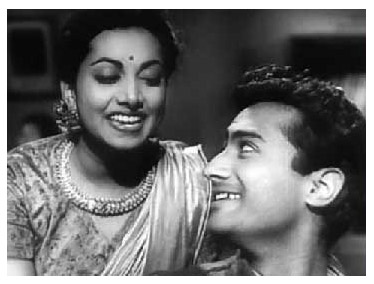 His visits to Suraiya’s Marine Drive apartment took place with “clock-like regularity”. It was too idyllic a scene to last long. Soon the busybodies started wagging their tongues. Other suitors too put their claim. “A Hindu marrying a Muslim girl was simply an untenable situation,” they would whisper in the Granny’s ears. But the reality was different; it was not a question so much of religion, but the fear of losing all the money that Suraiya brought in if she were to be married. She was like a goose that laid golden eggs. The grandmother who laid down the moral and religious code of the family and also firmly controlled the purse strings put her foot down. Suraiya’s mother, who favoured the match, too had no option but to bow down to her mother’s strict dictates. To cut a long story short, thus ended the most discussed and publicized love affair of that time leaving both the lovers heartbroken and disconsolate.

The tragic end to Dev Anand’s love affair with Suraiya was emotionally a draining and heart wrenching experience for him. But the time is great healer. In due course, Dev Anand came out of his emotional bondage. It was at that time that Mona Singha rechristened Kalpana Kartik appeared on the scene. She was to become his leading lady in the film called “Baazi” that was the first picture to be produced by Navketan – a production house founded by the Anand brothers.

It being Kalpana’s first visit to Bombay, Dev drove her and others to Juhu beach for an outing after the photo session ended. Here, it was the upcountry girl Kalpana who initiated the flirtatious game and ran fast towards the sea daring Dev “Let’s see who reaches the waves first”. As was his wont, Dev Anand gladly accepted the challenge and ran after her. Kalpana splashed water all over him and Dev paid back her in the same coin. There on the beach, the two played games such like hide and seek as if they were children; Mona plastered Dev’s face with sand to the merriment of a few stragglers. Here Mona was the initiator and Dev played along with her. “Soon, Mona became an important part of my life. She started conquering me, and I willingly let myself be conquered,” wrote Dev in his Romancing with Life. Just within a few days of naughty courtship, “Dev found in Mona an anchor that he needed so badly”. They starred together in a few successful pictures, and finally after the roaring success of “Taxi Driver”, the two tied the nuptial knot in a secret marriage in 1954. 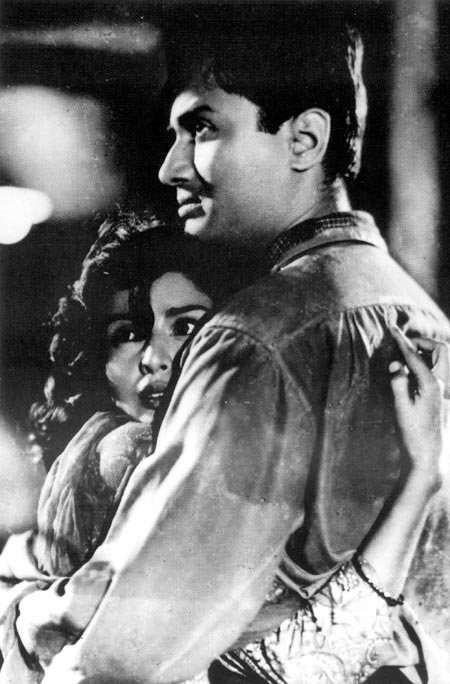 In 1970, Dev Anand was then earnestly looking for a girl to play the role of his sister in a forthcoming film “Hare Rama, Hare Krishna”. He wanted the girl to be Indian in looks but with a western upbringing, someone who would not hesitate to wear outfits that “would accentuate her whimsical, carefree, to-hell-with-the-world-attitude”. One night, Dev attended a party hosted by his friend director Amarjeet. It was there that Dev found the girl who was to play the role of his sister in “Hare Rama, Hare Krishna”. She was, no other than, Zeenat Aman who had just then won the title of Miss Asia. Hare Rama, Hare Krishna was a big hit and Zeenat Aman, ‘Dum maro dum’ girl overnight became the darling of millions of cine-goers and a cult figure for young girls.

Dev next produced “Heera Panna” with Zeenat in the romantic lead. Both the world and Dev considered Zeenat Aman as his “discovery”, and had become very possessive of her. By then Dev Anand had been married for more than 15 years with two teenage children; yet, that did not deter him from “desperately falling a love” with Zeenat – who was going to be his last of the ‘Teen Deviyan’. Zeenat, however, did not want to be tied down either professionally or romantically. She ditched Dev for Raj Kapoor and made “Satyam Shivam Sundaram” under his banner. Dev Anand was once again heartbroken and desolate, his self-esteem severely dented. 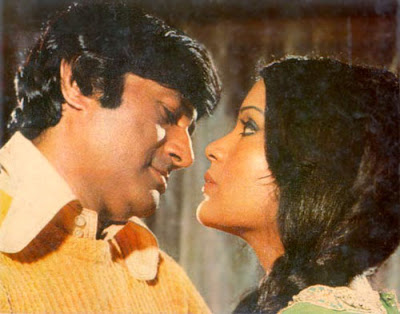 But Dev Anand being Dev Anand, he continued with his flirtatious games both in India and abroad whenever he found an opportunity. He unabashedly flirted with Allena, a Czech interpreter in Prague. Later in his hotel room, Mona confronted him about her. The two then had a big spat; the young Suneil started crying in his ‘basket’ in a corner of the room. “Dev was more often a lonely figure; neither he mixed with his married sisters or their children nor he met them on special occasions like Rakhi and Diwali,” says a close kin. Dev was very much his own man. His entire life revolved around films, scripts and new ideas.

(The writer is a Dehra Dun-based author and freelance journalist.)