Easy Rider: The Officer And His Mean Machine

Let’s just face it... Motorcycles are a direct extension of a person’s individuality. They are a reflection of your true personality and well... Could also pass off as your first love! You may spend hours and money on accessorizing them with cutting edge accoutrements, chrome, tassels, LED lights, and performance parts and have the best riding gear but at the end of the day what one really desires is that the mean machine must feel and look as good as when we do riding it. As the days roll by and the miles cruise past, you tend to become closer and closer with your ride. When the weather gets rough, traffic heavy, or when it’s been an epic riding day filled with twisty roads and scenic views around every corner; it’s perfectly alright to treat your bike as your best friend and buddy as well.

Few things have captured the passion, and most times the obsession of men, like the motorcycle. Lately, of women too. There is really no mystery to this as motorcycles represent an unusual combination of several elements: danger, speed, singular focus, mechanics, noise and physical skill. That adrenalin rush and the need for speed are often a lethal combination.

Many famous men and women are motorcycle enthusiasts; they combine their passion for things like acting, music, and adventure, with a love for bikes. Motorcycles are a perfect outlet for their zeal for life; riding the open road with the wind in their faces leaving them invigorated and inspired. Military men and their motorcycles have a long and interesting history...filling niche roles in combat, primarily where speed and agility is needed, such as doing reconnaissance, security patrols, and messaging when routine communication is down. During World War I, motorbike production was greatly ramped up for the war effort to supply effective communications with front line troops. 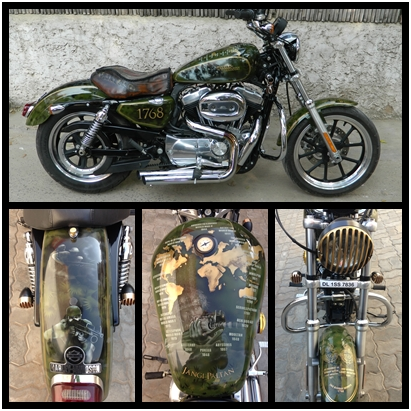 Messengers on horses were replaced with despatch riders on motorcycles carrying messages, performing reconnaissance personnel and acting as a military police. After the World War II, veterans found a replacement for the camaraderie, excitement, danger and speed of life at war in motorcycles. Grouped into loosely organized clubs, motorcycle riders created a new social institution - the motorcyclists or "bikers”. The motorcycle also became a recreational machine for sport and leisure, a vehicle for carefree youth. Motorcycle taxis are commonplace in the developing world too. Scooters, mopeds and motorcycles offer a fast, cheap and risky way around snarled traffic and scarce mass transit, as they can easily squeeze through jams. Today the Japanese manufacturers, Honda, Kawasaki, Suzuki, and Yamaha dominate the large motorcycle industry, although Harley still maintains a high degree of popularity, worldwide.

Col. Vivek Chadha bought his first bike almost immediately after being commissioned into the Maratha Light Infantry. He recalls it was just before the Commando course he was slated to do and had come to Delhi for a short break. That’s when he picked up a Yamaha RX100, which in those days worked out approximately to about Rs. 24000. A two stroke bike, it was a rocket for its small size and remains an iconic bike even today amongst old time bike lovers.

A large number of field postings and the ‘practical’ reality of moving about with a family shifted focus towards a car for some time and maintaining a bike along with that was a financial challenge. It was sometime during his command that he was bitten by the bug of buying a bike again. It was also the time that some extremely snazzy and peppy bikes with bigger engine capacities had been introduced into the market. Vivek almost ended up buying a Kawasaki Ninja 250 at Indore, while he was posted at Mhow, just after completion of his command of 1 Maratha Light Infantry (Jangi Paltan).

That was one day when in a momentary lapse of concentration, his better-half agreed to the seemingly foolhardy decision. She was not scared about his safety as much as she was of their son, who was fast approaching the legal age to drive. Luckily, the dealer refused to take a credit card payment that evening. And thereafter his quest was placed in dormant quarters, awaiting the next opportunity. It is pertinent to mention here that Vivek had his heart fixed on the Ninja 250 at that time because it had a green and black combination, which are the colours of ‘Jangi Paltan’. Some would call him crazy for this... Maybe he is he adds in jest!

Then opportunity came knocking at his door soon enough. After he took pre-mature release from the army, he realised that both age and opportunity were fast passing him by and it was a matter of time, when even he would start having serious doubts about his ability to ride a bike. One evening, at the dinner table, there had been a serious argument on the ‘bike’ issue and his daughter was rather surprised to see him emotionally charged, as he walked away from the table to his room in a huff. The emotional blackmail unleashed had an impact and the desired result as he was given the go ahead. And before anyone could change their mind, he was at the showroom the next day to book a Harley. And thus began Vivek’s entry into the world of motorcycles yet again.

Vivek rides to office occasionally on his ‘Harley Davidson Super Low 883’and with a Delhi based Harley Owners Group on the weekends. Vivek was itching to personalise his bike soon after he purchased it and the desire was further driven by the custom painted bikes on display but most of the Harleys seemed to be swamped in skulls and flames. But Vivek wanted his to be different and represent his identity. That’s when he had a brainwave of getting the history of his battalion custom painted on his mean-machine. Every battalion has its own history, traditions, ethos, battles and victories to speak of. Since Vivek’s battalion is now 247 years old he needed a theme that did justice to it. His search for the perfect artists was tedious and long but finally bore him fruit.

Masterful airbrush techniques brought Vivek’s dream project to life. The bike was given the backdrop of a camouflage pattern in shades of green and black. The wide flowing fuel tank of the ‘Super Low’ displayed the central theme of the design... An image of despatch riders from World War II adorns one side of the tank while the other displays a scene from the Battle of Stalingrad. The top half boasts of a world map in golden colour signifying the geographical spread of wars fought by the battalion. Just below this is a soldier with a rifle aimed at his adversary. The words ‘Jangi Paltan’ runs below the image, which is the ‘nom de guerre’ of the battalion since 1788, a unique honour which remains its calling card till date. The 21 battles and theatre honours of the unit form the final oval layer, with the names, war and year of each respective honour. The front fender displays cap badges and evolving names of the battalion in an ascending order from the front to the rear. The rear fender has images of soldiers in action from two eras in history. The rear end features a soldier from Vivek’s battalion photographed in 2008 in close vicinity of the LOC with an AK 47 rifle and an under barrel grenade launcher. Above this is a painting of a group of soldiers from World War II. An old school compass illustration is displayed on the fuel cap. The bike has also been upgraded from the 883 cc engine to a 1200 cc engine.

It is no surprise that heads turn every time the rider and his machine ‘vroom’ past!

A few years back, the chaotic traffic of Delhi often used to make him wonder about the crazy guys who dared to ride two wheelers. Having been riding for over three years now, he thinks it is more of a mental block. This is not to say that the traffic is not chaotic and Delhi does not have more than its share of crazy daredevils. But the use of adequate safety gear and what he learnt in the army in terms of defensive driving does bring a degree of sanity in the otherwise insane world.

Vivek is almost 48 and has often deliberated why he rides or for that matter anyone else, especially after 40. He guesses, for a lot of them, this brings life to a full circle. The pace and accompanying adrenalin flow begins to ebb in the late thirties under the influence of the routine lifestyle that we all tend to lead. The predictability of this routine is once again challenged by biking. It is great therapy for the mind, which could at best rest on achievements of the past, to relive them and feel alive yet again.