The Sweet Tooth Of Kumaon

‘Pahadies’ i.e. the hill folk from the Central Himalayas do have a sweet tooth, especially those from the remote pockets of the bordering region towards extreme north. Per capita consumption of jiggery- the fresh supply of which hits the foothill markets following the festival of Deepawali -is almost double in these pockets as compared the same in foothills. And it is there despite the fact -that quality wise the jiggery produced for hill pockets invariably happens to be quite inferior than its counterpart for the common consumer in foothills and plains. Anyone personally known to a grocer in the foothill town of Haldwani if ever happens to ask for the sticky brownish looking jiggery, would invariably be advised by the shopkeeper not to opt for it as it was meant for supplies to the inner reaches of hills. Sweetmeat of gourd (petha) produced in one of the filthiest streets of Bareilly in the most unhygienic conditions and also the clumsy looking coloured figurines made of unrefined sugar have a thriving market in hills. Probably the hill people require more energy and thus more glucose to climb up and careen down the hills with heavy loads on their shoulders. ‘Sweet’, indeed have been the uses of adversity here…

Besides these substandard sweetmeats- inducted mainly from foothill marts in a limited range albeit in sufficient quantity –in hills there has been a tradition of making highly sweetened milk products. Processed following a technique perfected over centuries, quite a few of these sweets have prolonged shelf life and their unique flavor and aroma has earned for them the status of hill souvenir. Bal Mithai, with its dark chocolate like appearance covered with sugar coated white globules, definitely is such a sweet. It is to ‘pahadi’ culture what cake is to Europe and noodles are to China. 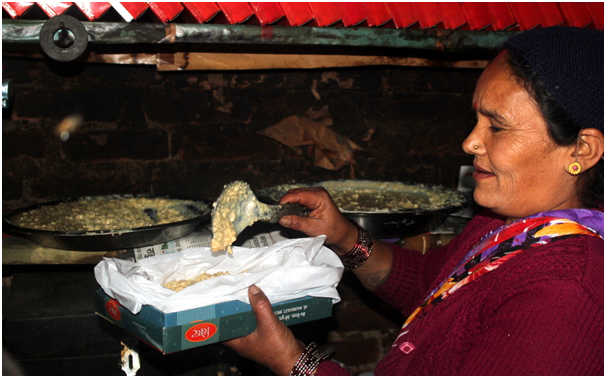 Bal Mithai, which sneaked into the Kumaon region of the Central Himalayas from Nepal- in all probability around 7-8th century AD, when Sun worship was quite prevalent in hills -has an interesting historical background. Scholars of Assyriology say that ‘bal’ happened to be the name of Sun God in ancient Assyrian culture. Incidentally, researches on the biblical city of Nineveh (literally meaning city of blood) by archaeologists like Max Mallowan underline a lot of similarities between Kali Kumaon- the region corresponding to the Himalayan districts of Champawat and parts of Pithoragarh bordering with Nepal -and the Central Asian expanse. Like Nineveh, Kali Kumaon, the ancient most inhabited region in hills has Lohu or Lohaghat (meaning valley of blood). Quite a few villages in this region like sui, bisang etc. appear to have been named after their counterparts in Central Asia having identical names. Close to Lohu or Lohaghat a site at the top of a hillock is known by the name of banasur-ka-quila and seems to have been having some connection with ashur-bani-pal of the ancient Assyria. This entire region has several sun temples of mediaeval period having the word ‘bal’ prefixed to their names eg. bala or badaditya or baleshwar. Balmithai, scholars believe, initially must have been the name of the prime offering to the Sun God. Sun worship died in Kumaon several centuries ago, but not the bal mithai . It is of interest to know here that in hills Sun was worshipped not as a celestial luminary but as a debonair debauchee donned in long boots, a roman toga and mounting a chariot pulled by seven fierce horses.

Back to the bal mithai- then a prime offering to the sweet toothed God sharing all human weaknesses, it has now become the most sought after souvenir from Kumaon Hills. Its processing consists of boiling the sweetened milk till it becomes brown and solidifies. Cut to pieces each measuring around an inch in thickness and four to five inches in length it then is dipped into boiling sugar syrup followed by a quick rolling over the roasted and sugar coated poppy seeds which stick to it evenly. Cooled and packed into cardboard boxes it may be kept for over a month in room temperature.

Like balmithai, Singauri is also a traditional and localized product. Its processing does also consist of condensing the milk without allowing it to change its colour. The flake white solidified stuff is packed into the cones made of the green leaves of a wild creeper locally called malu (Bauhinia vahlii). The fragrance of the fresh leaves of malu gives a peculiar flavour to the sweet stuff which is eaten after peeling off the green jacket.

Besides the bal mithai and singauri which are generally taken together and are available all over hills, there is yet another sweet which from the point of view of availability, even within the hills, is highly region specific. Associated characteristically with a handful of pockets in the bordering districts of Champawat and Pithoragarh and known for its semi liquid, sticky and elastic texture it has earned for itself an onomatopoeic sobriquet- khainchua. Production and sale of Khainchua is confined to small road side stations like Didihat, Debidhura and Vadda bordering with Nepal. It is a highly palatable preparation of pure milk and is eaten best when fresh and semi hot. Watching one Mrs Bisht at a small roadside station called Debidhura, singing paean of three-four troughs of Khainchua that she makes every day condensing 25 to 30 liters of farm fresh milk is indeed a treat in itself. Selling her stuff at the rate of Rs 10 per serving (of course on a rectangular piece of newspaper) she calls it a day by the noon- by which time all her troughs are emptied.

(Written under the aegis of CSE Media Fellowships)