Paying a tribute to a real life story on investigative journalism for a commercial Hollywood flick is not a common occurrence. Especially with reference to a story that is an expose on the Catholic Church and tackles the extremely fragile subject of child abuse. But it has happened and the film Spotlight (2015) will release across the country on Friday.

Directed by Academy-Award nominee Tom McCarthy, Spotlight is a taut, edge-of-the-seat thriller. Spotlight zeroes in on the Boston Globe investigations by its own Spotlight team of reporters and the series of stories published over one year on this fragile subject won the Pulitzer Prize for Public Service in 2003. The story investigated into allegations of abuse in the Catholic Church that revealed not only the abuse but more shocking was the decades-long cover-up at the highest levels of Boston’s religious, legal and government establishments that went to great lengths to see that the story did not get out and reach the public. The waves shook the entire world at the time. After the Spotlight team published its work, the team created a book about the events. Sacha Pfeiffer, one of the leading members of the team is a co-author of Betrayal: The Crisis of the Catholic Church. The consequences of this massive reveal rocked the world and had a ripple effect across the many major religious institutions.

In 2002, the Spotlight team published nearly 600 stories about sex abuse of children by more than 70 priests whose actions were concealed by the Catholic Church. In December 2002, Cardinal Law resigned from the Boston Archdiocese and was re-assigned to the Basilica di Santa Maria Maggiore in Rome. 249 priests have been publicly accused of sexual abuse within the Boston Archdiocese. As of 2008, 1,476 victims survived priest abuse in the Boston area. Nationwide 6,427 priests have been accused of sexually abusing 17,259 victims. In the years since Spotlight’s report, sexual abuse by Catholic Church priests has been uncovered in 105 American cities and 102 dioceses world wide. (Source: www.bishop-accountability.org, a database compiled by Terry McKiernan) 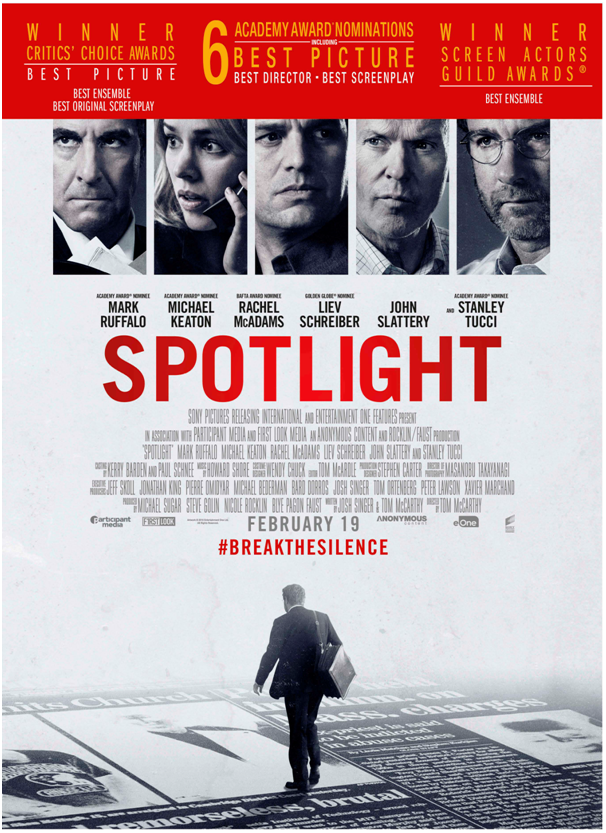 McCarthy wanted to satisfy the ultimate arbiters of authenticity, the Spotlight reporters themselves. “We tried to get everything right not only in terms of the facts and figures but also in terms of the emotional content,” McCarthy explains. “We wanted the people who lived through this experience to see this movie and say, ‘Yes, that’s how it was. “After seeing a preview cut of the film, the reporters portrayed in Spotlight gave the movie a collective thumbs up. “Marty Baron, the editor who had recently taken the position at the Boston Globe, sent us an email noting how important it is for people to understand that the kind of journalism you see in Spotlight is elemental to our society as Americans,” McCarthy says. “A free press keeps powerful institutions in check,” he sums up.

Liev Schreiber has portrayed the character of Marty Baron. He was happy when he was handed the script because he had studied with McCarthy at Yale University studying acting and direction though later they went their own independent ways. Schreiber was born in San Francisco and graduated from the Yale School of Drama in 1992. He has worked extensively on stage, in film and on TV, where he is the star of the crime drama Ray Donovan. Schreiber made his directorial debut with Everything Is Illuminated in 2005.

When asked what he felt about Marty Baron, the real man he was portraying, Schreiber said, “I think he is my new hero. In 2001, Baron instructed his team of investigative reporters – known as Spotlight – to take a fresh look at claims that Catholic priests had abused children in the area. Every single journalist portrayed in the film gave support to McCarthy and his production. “You know, it was such a careful and thoughtful treatment of them, such an intelligent, well researched, lucid, and fact-based interpretation of the events, that I couldn’t imagine they wouldn’t be (involved),” says McCarthy.

About working with his old friend McCarthy, Schreiber says, “I was really impressed with Tom. There is a kind of restraint he exercises that I think is incredibly intelligent. The architecture of the narrative and the performances are deftly handled. Marty is, if you think of it in terms of screen time, an incredibly small role, but his placement of it, and the way he uses the character, is really effective.”

About what triggered and sustained the cover-up for so many years, McCarthy said, “I truly do not know the answer. It is really a difficult question and a rhetorical one too in a manner of speaking. Perhaps they felt like they needed to contain it, and by containing it I mean keeping the offensive part of themselves. But I think that was the thought behind it. They would handle it internally and that would be the best way to deal with it. That perhaps there would be a danger to let outsiders into this problem. It was their problem and they had to handle it.”

Spotlight begins and ends in the Boston Globe offices. To recreate a major metropolitan news operation during the seismic shift from the print to web publishing era, production designer Stephen H. Carter measured the layout of the Globe’s headquarters, then used those specs to re-create 120 cubicles in a vacant Sears department store outside of Toronto. “The newsroom is one of the things we really wanted to control pretty tightly,” says Carter, who previously worked on Best Picture Oscar winner Birdman: Or, The Unexpected Virtue of Ignorance. Stanley Tucci has who portrayed Mitchell Garabedian, a lawyer who represented many of the victims.

Rachel McAdams has played the role of Sacha Pfeiffer. She was -part of the Spotlight team. The stories also received other honors such as the George Polk Award for National Reporting, the Goldsmith Prize for Investigative Reporting, the Selden Ring Award for Investigative Reporting, the Associated Press Managing Editors' Freedom of Information award, and the Taylor Award for Fairness in Newspapers. Sacha is important because she insisted on interviewing the child victims and has kept in touch with them till today. For her, it is not a story she has left behind after it was over and the cheering had stopped, the accolades and awards were forgotten. How many investigative journalists have we seen keeping up the follow-up with these children who have now grown up and trying to cope with the trauma they suffered more than a decade ago?