NEW DELHI: The village of Bihat in Bihar's Begusarai district, 120km from Patna, is the centre of a lot of attention as media persons, politicians, well-wishers and even protesters descend upon it, making their way to Jawaharlal Nehru University Student Union leader Kanhaiya Kumar’s home. In a tiny thatched house live Kumar’s parents -- his father, Jai Shankar Singh, a paralysed peasant, and his mother, Mina Devi, an anganwadi worker who earns about Rs. 3000 per month.

Bihat has never before gotten this level of attention, despite being a politically important village, where the left parties, till recently, held sway. “We are a family of Communists. My grandfather was a freedom fighter and a Communist. My father is still member of the party. Betia is the only village where except the last elections, the Left has never lost a seat since 1962,” Kumar’s elder brother Manikant Singh said at the CPI(M) headquarters (as quoted by HT).

Despite the rumours and misinformation, the whole village has galvanised behind the family. “Kanhaiya has been framed,” is the general consensus as people remain glued to the news.

The support has come in from other quarters as well, as students of Shantiniketan and Patna painted the walls of Kumar’s house with graffiti and slogans for Azadi. “Save JNU Save India” they wrote, as ‘Azadi’ came to echo the meaning it does in Kumar’s speech at JNU before his arrest … azadi from feudalism, capitalism, Brahmanism.

In one of the art works, Birchandra Kumar made a large size crocodile wriggling towards protesting JNU students with its mouth open and the caption in capitals reads: “Save JNU Save India.” In another, Kumar is shown addressing students in the campus carrying red flags and “Red Star” written in bold fonts. 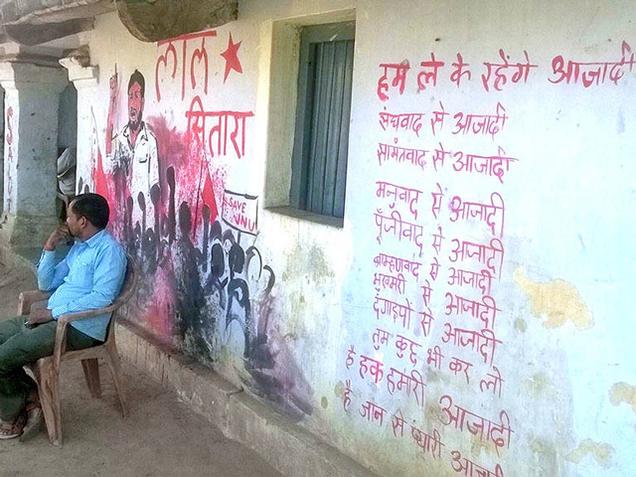 (Art work on the walls of Kanhaiya Kumar’s home).

The slogans are all the more striking as heavy police protection has been deployed to the village, as BJP/RSS-linked supporters have taken out protests against Kumar.

The Left parties have led bandhs, bringing life to a standstill in the district. Nearby, Patna University has been affected, as All India Students' Association (AISA) activists stand at the gate of the University singing songs of protest. Newspapers reported a clash between All India Students' Federation (AISF), Rashtriya Janata Dal (RJD) and Janata Dal (United) - linked supporters and Bharatiya Janata Party (BJP) activists near the state BJP headquarters on Beer Chand Patel Marg, after Kumar’s arrest.

Bihar’s Chief Minister, Nitish Kumar, has also spoken out in defence of Kanhaiya. "Since they have failed to fulfil any of their promises, and failed on the economic and development fronts, they are trying to kick off sentimental issues," Nitish Kumar said. 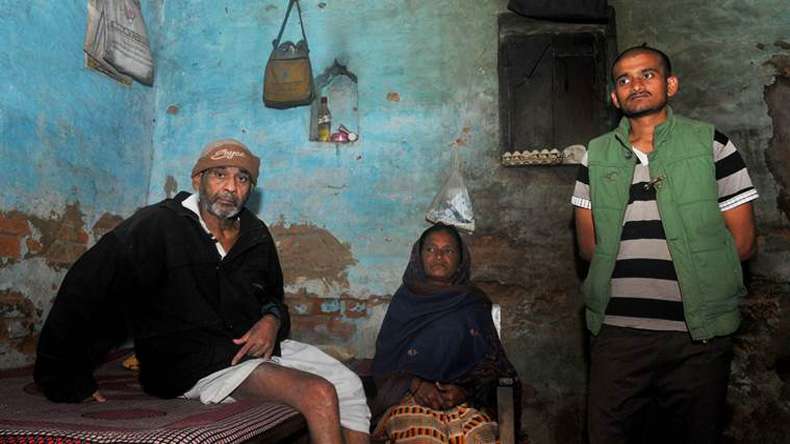 (Kanhaiya Kumar’s family at their home).

Kanhaiya Kumar’s family, despite all the challenges and the postponement of bail, remain optimistic. We are constantly watching TV after we got to know that Kanhaiya has been arrested. I hope police does not beat him too much. He has never disrespected his parents, forget the country. Please do not call my son a terrorist. He cannot be one,” Meena Devi said over to phone to PTI. “You are brave, don’t worry about anything,” Devi has been quoted as saying.

”My son has been part of so many campaigns against the BJP government, be it on fellowships or suicide of a Dalit student in Hyderabad university. He is being victimised for his opposition to Hindutva politics,” Jaishankar Singh had earlier said.

Rajendra Singh, Kanhaiya’s uncle who made the journey to Delhi after the arrest, said, “What pains me is the label of 'anti-national' is being used for a family that has a martyred son,” in reference to Kanhaiya's cousin, a CRPF jawan, who had died while in combat with terrorists (as quoted in NDTV). "Even now, five members of the family are in security forces.”

“Kanhaiya can never be an anti-national. Patriotism is in our blood and we do not need any certificate of nationalism from the killers of Gandhi – the Father of the Nation. Five sons of my family are protecting the country at the borders. We lost one of our brave sons (Dilip Singh, a CRPF jawan) four years ago in an ambush by insurgents at Manipur. Today, they (the right wing forces) are using the names of people like Bhagat Singh, Chandrasekhar Azad and Dr Ambekar to prove their nationalism. But they perhaps do not know, had they been alive, they would have supported Kanhaiya,” Rajendra Singh told First Post.

“Kanhaiya held my hand and consoled me saying that he was following the path I had shown him – the path of truth, the path to fight injustice. He asked me has he done anything that would make his parents and the entire family ashamed of him. I assured him that he had the full family support and should proceed on the leftist path, which our family has always believed in,” Singh said after meeting Kumar in jail.