PASSING SHOW : A SEARCH INTO ONE'S PAST?

Theatre, like cinema, being an audiovisual medium, does not make language a limitation for the audience. All good theatre crosses the language barrier smoothly through universal stories, good execution and plots that cross the time-space paradigms. So, a Bengali play called Passing Show will appeal to every viewer never mind if he knows the language or not.

Sayak is a Bengali theatre group that has been performing proscenium theatre for 42 years now not only in Bengal but beyond the home state and crossing the borders of country and nation. Over these 42 years, Sayak has staged 3000 performances of 24 full-length and seven short plays across the country and the world. Some of the plays are based on original scripts by Chandan Sen and the late Indrasis Lahiri alongside translated adaptations of plays by Bertolt Brecht, Leo Tolstoy, Somerset Maugham, Mikhael Satykov-Schedrin and Anthony Dodge. Adaptations of Indian classical plays have also been staged by Sayak.

With its founder-director Meghnad Bhattacharya at the helm of affairs and his committed team of workers we were recently audience to an extremely ideological and philosophical play called Passing Show. Based on a story by Amar Mitra turned into a play by Ujjal Chattopadhyay, the name Passing Show is inspired by a brand of cigarette earlier made in London and commonly used sometime in the 1940s. 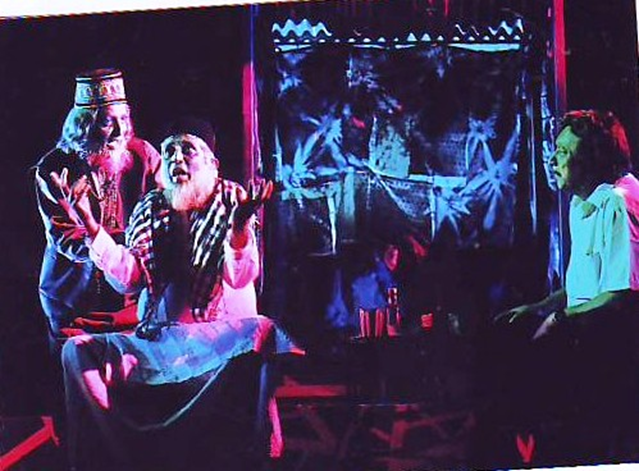 It is the brand Atin (Meghnad Bhattacharya)’s father, Dhurjoti Dutta smoked. Atin cannot let go of the shadowed silhouette of his dead father smoking his Passing Show as he listens to the only song he ever wrote on the ancient gramophone next to his easy chair sung by his friend Atulananda.

The performance uses a minimalistic set that vacillates between and among spaces, times and people fluidly, sustaining a sense of intrigue and exuding a feeling of suspense about whether Atin will be able to find that record and the singer who sang the song and make his peace with his lost past he cherishes so closely. The music, by Joy Sarkar, with references to popular songs of the past mingled into the background score of the present is low-key, nostalgic and carries pleasant associations. There are doses of cheerful humour dotting the play to dilute its seriousness brought across by brief cameo characters that people the play. Somnath Chattopadhyay’s magic lighting effects are mesmerising that, at times, transport us into the world of fantasy and dreams while when in ground reality, it turns realistic. 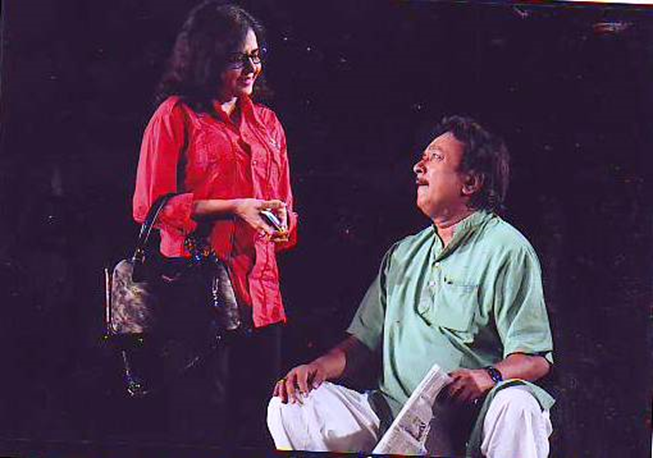 “Passing Show” is also a metaphor for images from the past flashing through Atin’s mindscape as he sets out to search for that lost record and the singer who sang his father’s only song. The play charts the middle-aged Atin’s two-pronged journey into his past, in search of the singer of his father’s song and within the present where is desperately seeks to save his ancestral home from the grabbing greed of realtors and promoters eager to make a fast buck in ancient premises. But the home is where he grew up in and spills over with memories – visual, musical, acoustic and emotional and he cannot let go of them. So, as he goes about searching for that lost song from his childhood, he also keeps fighting off intruders who want to grab his home and convert it into small, matchbox-size flats which have no connect with his boyhood and the memories it brings along.

Passing Show also symbolises the common man like Atin because, according to Nagesh Karmali, president of the Goa Freedom Fighters' Association, "Passing Show was the cheapest but a popular cigarette brand then. It was imported from England. It was the colonial equivalent of the Charminar brand." So the title is also a tribute to the common man who has not forgotten his roots and does not want to.

As he searches for that record and for the man who sang the song through the lanes and bylanes of the city, Atin encounters an old man, Ghulam Mohammed (Samiran Bhattacharya), who seems to have the answer to his search. As the play unfolds, we discover that Ghulam is a surrealistic magician who can find out anything he wishes to and is in reality, the surrealistic bridge between Atin’s past and present.

Ghulam finally shows him the way to the singer’s home. Surrealism adds a different dimension to the play, carrying us with Atin into a journey of dreams where even that top-hatted, sometimes monocled Briton on the cover of a Passing Show cigarette tin comes alive on stage to fulfill Atul’s passion for nostalgia. His wife and daughter are very confused and sometimes think he is getting crazy but offer silent moral support all the same. 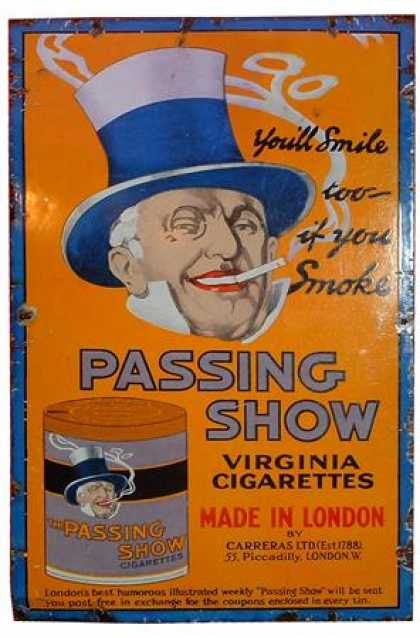 Meghnad is wonderful in his multi-shaded portrayal of Atin, torn between his search into his past and the demands his present makes on him. He gets ample support from the rest of the cast mainly from Indrajita Chakraborty as his daughter Lila (meaning illusion) and Runa Mukhopadhyay as Sampa his wife, and the cameo actors not to forget the touching performance of Samiran Bhattacharya as Ghulam.

The only problem with the play is it is a bit too long. The other factor is the intrusion of the “Self” search that takes away from the core of the search for the song. This is already implied through suggestion and did not need so much of emphasis or articulation.

He discovers to his shock, that his father’s friend Atulananda is no more and the record still exists with the widow he left behind and their blind son. Is this the end of Atin’s journey into his past, that song that belted out a beautiful ode to life, where he actually imagines his father in the shadows, rings of smoke from the cigarette floating in the air as he listens to the record of his own song? Not really, Atin realises. He says that the journey was actually a search into his own Self which took the concrete shape of a song from his past that made his present meaningful and significant. The lost song was as if, a catalytic agent, like Ghulam, who bridged his love for nostalgia which made it possible for him to accept his present, a leap from the world of memories into the present world of materialistic aspirations.

It is a very topical and relevant play that works well in a world centered on shopping malls and indiscriminate mushrooming of skyscrapers galore, luxury cars and commercial cricket matches sponsored by Bollywood.