The timeless landscape of the Kumaon hills, in particular Ranikhet Cantonment, born in 1869 in response to the urgent need of British soldiers to escape the heat of the Indian plains, serves today as more than a refuge.

Gems of history continue to dot its evergreen landscape. Here, on the promontory of a small hill, squats an old British style gabled bungalow 'Knock Fierna’, translated tellingly as, 'Where the Faeries Knock’. A house this old invites commune with the ghosts of inhabitants past. It bears the imprint of an ordered pre and post-colonial life that moved seamlessly like the quiet gurgle of the stream that lies at the bottom of the hill where the house stands. These hills are an untouched forest of chestnut, banj (stunted local oak), devdar (conifer), chir (pine), punctuated by a profusion of flowering bushes and ferns and whispered tales of those who dwelt here.

But more, the pristine mountain air, the abundant snow views, pink September clouds, crocii bursting out of rain drenched hillsides draw the aesthete as a thirsty person to a well of water.MANJU KAK’S xhibition of both old and new work, in oil and watercolour on canvas and paper have often been executed in the tranquil moments of just such a Ranikhet State of Mind. 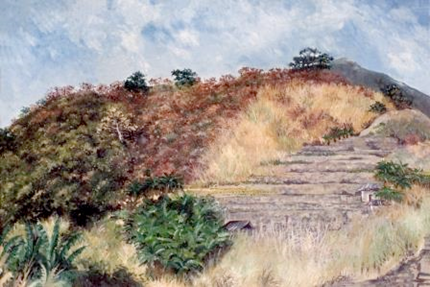 ]Manju Kak returns to her palette after a long hiatus with this exhibition that is a metaphorical allusion to the 'sanctity’ of seeking refuge. Be it word or image, research or a curatorial theme the quest essentially remains the same—an intense desire to unravel the centrifugal force of what at that given moment grips her imagination. Through this burrowing and journeying some unique nugget of life is examined intensely.

As a painter, her work was first shown at Alvin Gallery & Wattis Fine Art, Hong Kong (1989) then at the Graffitti Gallery, Hong Kong (1990). Later she exhibited in Group Shows and at the India International Centre, New Delhi. A few of her art works are in Private and Public Collections in India and Hong Kong.

Her published short fiction includes First Light in Colonelpura, Requiem for an Unsung Revolutionary, and Just One Life and Other Stories. A socio-cultural and craft history of the state of Uttarakhand where Ranikhet lies: In the Shadow of Nanda Devi is forthcoming. Also her abiding interest in the mountains led her to make the film 'They who Walked Mountains’ and the edit the book 'Nicholas Roerich—a Quest & Legacy’. She has a Ph.D in the History of Art from the National Museum, New Delhi. 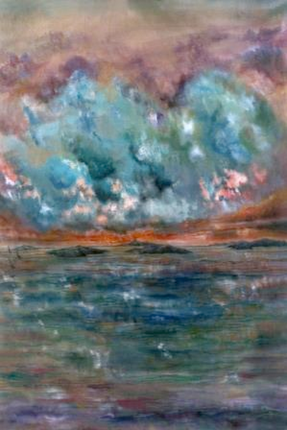