Cannes Diary: Clooney Creates a Monster Buzz "There is Not Going to be a President Donald Trump!"

In what could be the windiest Cannes in many years, it was a Thursday of maneuvering the winding and corridored pavements of the festival to reach the many venues which opened its doors to delegates.

For the large number of Indians, what mattered most was the opening of the spacious sea-facing Indian Pavilion by the Minister of State for the Ministry of Information & Broadcasting, Government of India, Col. Rajyavardhan Singh Rathore and a select team representing the country as the world’s largest producer of films.

Speaking to a filled-to-the-brim audiences, Rathore said, “India has already signed co-production agreements with a slew of countries. In the last one year five co-productions have been undertaken with France alone. We need to take these partnerships to the next level now.” He added that the government has instituted the Most Film Friendly State Award as part of the National Film Awards with the objective of encouraging states to support the film industry. Actor Kamal Haasan was also present. Others present were Indian Ambassador to France, Dr Mohan Kumar, Uday Shankar & CEO Star India , Kishore Lulla, Executive Chairman, Eros International Media Ltd, L Suresh , President, South Indian Film Exporters Association and filmmaker Sudhir Mishra.

In the evening, Un Certain Regard, second to Cannes’ competition section, and for many, even more key as the place to discover truly independent and significant films from far corners of the world, held its august opening. The film screened was the Egyptian-French film, ‘Clash’. Its director Mohamed Diab, well known at home and abroad as an activist and blogger, says that his film “portrays a very real and tense situation that brings out the worst and best of humanity”.

Set in 2013, just after the Egyptian military toppled the Muslim Brotherhood government of Mohamed Morsi, the film is entirely shot from within a paddy wagon, where pro-army supporters and Brotherhood members are thrown together in suffocatingly close proximity. Using a handheld camera, the film is intensely cinematic, its harshness offset with a pain and longing for one’s own country.

A walking distance away on the main Riviera street, the diehard admirers of the Directors’ Fortnight rushed for its opening film, Marco Bellocchio’s ‘Sweet Dreams’. The innocuous title is belied by the emotional impact of the film as it follows the nine-year-old boy Massimo as he grows into a man while alongside he sees a changing Italy emerge. In the first scenes the boy and his mother remain as a couple in a close relationship, But his mother’s sudden death takes him to another level of experience. Later, the film looks at his introduction and then success in journalism, first as a sports writer and then as a war correspondent in Sarajevo, and as he progresses, the film traces his deep felt anguish.

For Cannes’ gathering crowds at the red carpet star parade, it was a field day for gazing at and applauding celebrities. On show was actress Jodie Foster presenting her fourth film as director, ‘Money Monster’, with a star cast of Julia Roberts (her first time at Cannes), George Clooney, with wife Amal, and co-stars Roberts and O'Connell. At his Press Conference, Clooney astounded the media with his statement, “There’s not going to be a President Donald Trump” adding, “Fear is not going to drive our country. We’re not afraid of Muslims or immigrants or women. We’re not going to be afraid of anything.” The film tells the story of a blowhard financial wizard, Lee Gates (Clooney), who, along with his director (Roberts) is held hostage live on air by a man (O’Connell), who risked his life savings on one of Gates’ tips.

And off the same busy Riviera street, Critics’ Week opened with the French film, ‘In Bed with Victoria’ directed by Justine Triet. The film is about Victoria Spick, a criminal lawyer who finds herself in an emotional void. At a wedding, she meets her friend Vincent and Sam, a former drug dealer who she put out of business. The next day, Vincent is accused of attempted murder by his girlfriend. The victim's dog is the only witness. Reluctantly, Victoria agrees to defend Vincent, while she hires Sam as an au pair (domestic help). With this her troubles increase by the day. 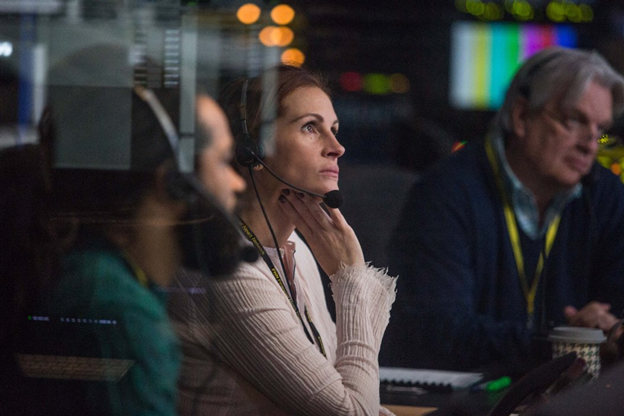 The three festival dailies (Hollywood Reporter, Screen and Variety) are a must read. It is in one of them that I chanced on a news item that the reputed Shekhar Kapur has been signed as one of the directors on an international compendium series. This follows Anurag Kashyap's recent and successful entry into this fold (with 'Madly'), of directors joining hands, presenting their individual episodes strung into a feature length film.