CANNES: The big films at Cannes are programmed at the beginning and middle. But some, ready only towards the tail-end, unexpectedly introduce a cinematic gem that energises the ebbing proceedings. So far, although many films have appealed and pleased, not one has created the fevered debate that, say, Lars von Tier’s ‘Dancer in the Dark’, screened at Cannes in 2000 did — when a majority vociferously rooted for it — and it won the Palme d’Or.

Quite the contrary, this year the touted films prior to closing have been sorely disappointing. The high expectations of celebrated firebrand actor-turned director Sean Penn’s latest film ‘The Last Face’, had the overfull audience squirming from the start, an outburst of laughter at the banal opening title cards, one saying that the film was a love story “of a man”, followed by another saying, “… and a woman”. Guffaws followed as the maudlin, sugary dialogue between the couple washed away any meaning the film could have. Penn’s sincere feelings for the massacre of Africans by all and sundry also seemed too studied and manipulated. The critics have pilloried the film.

It has been almost ten years since Sean Penn directed his last feature ‘Into the Wild’ and 15 years since he came to Cannes with his own film ‘The Pledge’. This time Penn shows us an unpalatable mix of a horrific war-torn Liberia and a teenaged sugary romance between the director of an international aid organisation (Charlize Theron) and a relief-aid doctor (Javier Bardem). Although both care deeply about their mission to save lives, their differing attitudes and opinions constantly tell on their relationship. However the staged and stolid acting contains not an iota of any charisma between the two and so the whole large-scale exercise to bring the world’s attention to a very real heart-rending issue is whittled away. 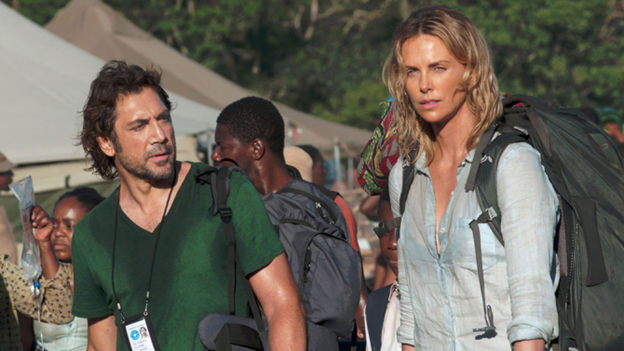 Sean Penn is said to have been in a (now ended) relationship with the lead actress. An unkind critic said that she must have broken it off with him when she saw the rushes of this film.

A glitzy, glamorous female driven film invited anticipation, as did Nicolas Winding Refn’s ‘The Neon Demon’, but this trite, trendy morality fable also bombed with the audience after the first ten minutes. The film, a kinky, surrealist horror, is set in the competitive modelling glamour world of Los Angeles, a city that symbolises everything that is superficial.

Here, where three willowy women take umbrage over the glowing, angel-like beauty of a 16 year old arriving fresh from Georgia to the sinful excesses of LA. They take their revenge when she is preferred over them by the leaders of fashion. Despite its unusual high baroque visuals and women of fashion parading all over its lurid and neon-lit scenes, all of them toweringly thin and menacing, they are stiff and dull as the dead the bodies they prey on.

The film tries to infuse the aura of Mephistopheles, Faust, Dracula but fails completely. Besides, what is also disturbing is the misogynist angle to the film that sees women as superficial, murderously competitive and dangerously deviant.

However the evening screening of another competitive entry brought the festival back on track, with a film of high quality – ‘Forushande’ (The Salesman) by Iranian director Asghar Farhadin (who made the unforgettable ‘A Separation’). He continues his exploration of the dark side of the soul, using a traumatic assault to trigger a young husband’s uncontrollable thirst for revenge.

The film is set mainly around a young married couple, Emad and his wife Rana, who are stage actors and part of Teheran’s cultural community. The film opens on their rehearsal of Arthur Miller’s 1949 Pulitzer-winning play Death of a Salesman, staged in Farsi, with Emad playing Willy Loman and Rana playing his wife Linda. The play is eventually performed under a big neon sign advertising gambling and booze, to a rapt audience.

The drama on stage then moves to their life at home. The couple are forced to shift to a new spacious apartment where the previous tenant, who they learn was a prostitute (described in the film as woman with many acquaintances) with a small child, who never gets down to removing all her belongings that she has packed into one room.

One fateful night, the young wife takes her bath while leaving the door open for her husband about to return home. He finds her lying unconscious on the bathroom floor with her face and head covered in blood. With this, the husband becomes obsessive about finding out who attacked his wife clearly with intention to molest her. The wife refuses to inform the police fearing public gossip and shame. She is totally unnerved by this incident, unable to stay alone at home and bitter about her husband’s lack of concern. Their relationship turns violent.

The film sees the slow transformation of a friendly, likeable and calm man into a cold, indifferent and cruel human being.

The director has been quoted as saying, “As in my previous films, ‘Forushande’ addresses how social challenges can propel the downfall of people.”

Still from the movie The Last Face directed by Sean Penn