CANNES: Isabelle Huppert plays the lead in Dutch director Paul Verhoeven’s ‘Elle’, an undefinable, complex role of a woman you would love to hate but cannot. She has you eating out of her hand with every glance, lift of eyebrow, caustic remark, and wishing that all women had her self-assured, indestructible spirit.

You wonder at yourself. Is this the way to talk of the subject of a violent rape? And can you actually laugh and chortle as the story unfolds? In Paul Verhoeven’s teasing and tantalising hands, heightened by Huppert’s audacious effrontery and some of the wittiest tongue-in-cheek throw-away dialogue, this is the racy story of a victim who unquestionably cannot be quelled. She is the victor, start to finish.

With this film Paul Verhoeven returns to the screen after six years. It also marks his debut in French, he has made earlier films in English and, of course, Dutch. ‘Elle’ is Philippe Djian’s fifth novel to be adapted to the big screen. Verhoeven’s ‘Basic Instinct’ opened the 1992 Cannes, the film that made Sharon Stone an overnight star. 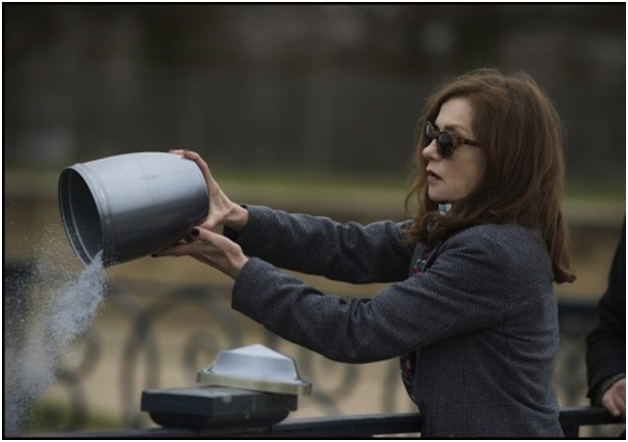 The film follows Michèle Leblanc (Huppert) who lives alone in a large two-storeyed house in an upper crust suburb of Paris. With her best friend Anna as partner, she runs a successful video game design firm with an iron hand. As the film starts the credits give way to sounds of a man and a woman, of a prolonged and violent struggle between them.

We see Michèle lying flat on her dining-room floor being sexually attacked by a burly man dressed in black with a sky mask over his head and face. As he disappears through a window, although bruised and bleeding, Michèle calmly recovers and takes a slow, pensive bath. She does not go to the police because we realise that her tragic past does not let her connect with law enforcement. A forlorn and sad picture of her as a child is shown when her father, some 30 years back, was served a life sentence for killing many children and adults and burning down his neighbourhood. In the film, Michèle describes this phase in detail but with a pat nonchalance that is discomfiting. It says a lot for the steely second skin and pert, almost cheery, character she has developed.

Michèle is surrounded by couples she finds distasteful. Her weak and well meaning son has a blonde mistress who is bearing a child which clearly is not his. Michèle’s ex-husband is a failed writer who takes to young girls who flatter his academic side. She coldly and assertively sleeps with her best friend’s husband Robert when the whim strikes her. She has an eye on the handsome banker living opposite, married to an avid follower of the Christian faith. Most of all, she abhors her mother (veteran actress Judith Magre) who has affairs with men half her age. On her deathbed, she asks Michèle to visit her elderly and ailing father in prison. Ironically, her intended tryst makes him hang himself, which she blandly accepts as a triumph.

All these relationships and most of all, Michèle’s attacker who reappears, allow for ironic, amusing insights into the weird ways of this upper-class set of people. They also serve to sustain the continuing suspense, which is unveiled two-thirds into the film, on who the rapist could be. When Michèle does find out, she does not take revenge in the way one would expect. She does it her own, ingenious way.

Huppert in this role commands compelling admiration, her head held high, walking steadfast and unfalteringly, with her never-say-die attitude. Most of all, she mocks everything and everyone, including herself. It is impossible not to side with this sharp-as-steel woman.

This incomparable actor has had the most films (16) in the Cannes' official competition, and has won Best Actress twice -- for ‘Violette’ (1978) and ‘The Piano Teacher’ (2001). She is also the most nominated actress for the Cesar Award (14 times) and has won it once, for La Cérémonie (1995).

Paul Verhoeven juggles with his convoluted plot and his collection of actors expertly and every which way, which brings a light touch to the film. Even so, there is hope that Huppert will win a well deserved third Best Actress award.