Graffiti: Art With a Statement On the Streets

Different forms of art have consistently been associated with emerging subcultures across the globe. Graffiti, as a type of modern street art has had a history of being an instrument of personal expression, often as a medium of communicating rebellion against authority. In public spaces, similar urban art represents the voice of the community, marginal groups, and young people that strive to be heard, frequently defying the notion of private property. A variety of Latin American Street art is largely focused towards conveying political messages and stories of struggle that speak directly to the viewer. 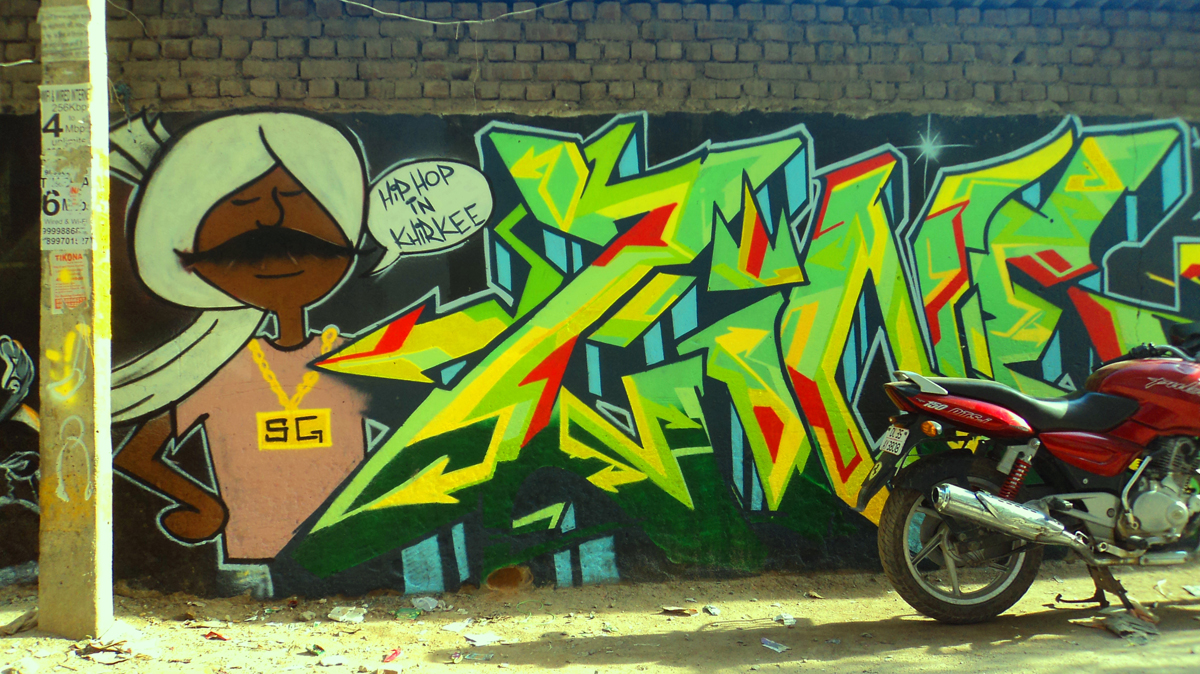 Shown above is street art on a wall located in the Khirkee Extension in New Delhi, by acclaimed graffiti artist, Zine.

Composed of vibrant drawings, messages and murals, graffiti gained popularity in the West several years ago. In most countries, painting on property sans the property owner’s permission is considered vandalism, and is a punishable offence. However, graffiti continued to become increasingly popular among the masses because it frequently carried underlying social or political messages and consequently attained visibility worldwide. It highlights the incredible ability of the artist to emanate messages, obscure or explicit, through the means of a handful of equipment and talent. In modern times, paint (particularly spray paint) and marker pens have become the most commonly used graffiti materials. There is a significant graffiti tradition in South America, especially in Brazil. Within Brazil, Sao Paulo is a significant centre of inspiration for many graffiti artists all over the world. The provocative designs juxtaposed with aesthetic representation have acquired a limited albeit valuable position in the urban city landscape.

Following years of obtaining acknowledgement and appreciation by the global art community, graffiti art has been shown in various galleries in New York and London, and artists are often commissioned to do legal murals and other work for art shows.

Terrance Lindall, an artist and executive director of the Williamsburg Art and Historic Center, has said, “Graffiti is revolutionary, in my opinion and any revolution might be considered a crime. People who are oppressed or suppressed need an outlet, so they write on walls—it's free." In relation to the controversies surrounding graffiti, there seems to be a perpetual disagreement between different authorities and artists concerning the interpretation of graffiti as vandalism or art, respectively.

Graffiti artists constantly remain under the threat of dire consequences for displaying their graffiti, especially since street spaces are largely restricted. Many choose to protect their identities and reputation by remaining anonymous. However, in a bid to get street art a degree of respectability, a number of talented graffiti artists are coming out and contributing to the recognition of graffiti.

Despite having developed a reputation of being a rebellious and controversial form of art practiced in public locations, graffiti art has reached remarkable heights of appreciation in all parts of the world, including India. There is a plethora of resplendent graffiti displayed in several locations across the length and breadth of the country, primarily, in regions of Delhi, Mumbai and Kolkata.

Apart from targeting street spaces, artists are now painting at festivals like NH7 Weekender, and Hornbill, Nagaland, and have shown participation even in alt-art movements like ‘St+Art’, a country-wide campaign that has pioneered street art on the Indian landscape.

With their hard work, the artists of the St+ Art community successfully transformed the Lodhi Colony area of Delhi into India’s very first open public art district between December 2015 and February 2016. Speaking to The Citizen, Arjun Bahl, co-founder and festival director of St+Art India, said, “Street Art has gained remarkable momentum in India in the recent years largely due to the efforts of similar organizations. Our primary initiative is to make art more accessible to the people, to cultivate a sense of belonging among local communities that we interact and work with.”Commenting on the support street art projects receive by government authorities, Bahl stated that the government has lately become more inclined towards promoting art and recognizing its potential. “We like to take things forward in an organized manner and work in collaboration with the government so that street art continues to generate dialogue and make progress. We wouldn’t like to be involved in controversies that jeopardize the efforts of the people associated with the cause or the cause itself.”

The Aerosol Assassins Crew comprising of members Zine, Samsam, Elf and Rane Insame, is an established group of skilled artists, who practice graffiti art in different locations all over the country and have grown to reach a considerable following among the youth. Their dynamic splash of art on walls located in several locations makes for a pulsating sight and resonates with an air of refreshing energy.

Street art in India has emerged particularly as a medium of fostering creativity and transforming the interpretation of art. The concept of claiming public spaces for the purpose of artistic expression continues to establish decent ground and seeks to bring out the artist’s individual interpretation of art. Based on information from sources, street art hasn’t landed itself in any controversies involving law enforcement since most artists choose to consciously work in a manner that doesn’t put their liberty of free expression at stake. The journey of the evolution of street art in India remains an interesting aspect to be followed and is expected to be the epicenter of an artistic revolution.