Class of Past, Chic of Present, Taste of Future: All The Best Jumbo!

BENGALURU: When India toured West Indies in 2002, Anil Kumble broke his jaw, spat blood but bowled out of his skin to dismiss the legendary Brian Lara. He dealt with a severe blow from speedster Mervyn Dillon while batting and almost flew back to Bangalore. But the gutsy cricketer wanted to fight tooth and nail; the sight of his bandaged face coming out to bowl is an inspiring tale. It has been 14 years and the Indian cricket team is set for another Caribbean test; call it luck or fate but Kumble will once again board the flight – as the head coach, the principal of the institution named Team India.

“At least I can now go home with the thought that I tried my best,” he had said after India drew the Test match then. Sir Viv Richards still refers to the incident as one of the bravest on the cricket field.

His presence in the current Indian Test team, with an aggressive skipper like Virat Kohli, provides the perfect gloss finish to the script started by John Wright, shaped by Gary Kirsten.

He threw his hat in the ring monitored by former colleagues Sourav Ganguly, Sachin Tendulkar, VVS Laxman and earned his due. Kumble hoodwinked former Team Director Ravi Shastri and 55 other applicants for the high-profile job. 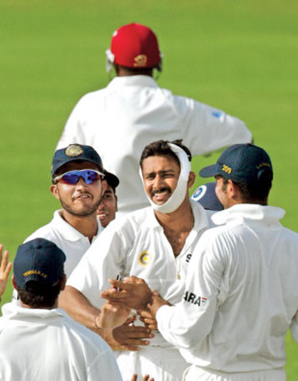 The strength of his character lies in his approach; while Shastri is fuming at being ignored after two years of service, Kumble — in his calm demeanour — said what one may call practical and situational.

“I am no more a player, I am the coach and I know the difference. I was the first one to call Ravi after I got the job. He did a wonderful job with the Indian team but it is not about Ravi or me, it is about the team and the players,” said Kumble, a veteran of 132 Tests and 271 ODIs.

Kumble cared for results, he held the country before everything else and nothing changed in eight years – since his retirement in 2008.

“He was a part of this journey before and now, I am a part of this journey. We all believe that the Indian team can dominate in all formats. It could be somebody else as coach tomorrow, I am not permanent in this role. I just have the opportunity to make a difference,” added Kumble, in his first press conference after wearing the coach’s jacket.

Kumble’s recruitment is beyond a debate, he is himself a discussion, he is his own competition and his way of working – when he captained India towards the later part of his career – is similar to that of his flippers – quick through the air kissing the stumps.

The no nonsense man – who bowled his first over wearing glasses in 1992 – has a sharp vision now. He is targeting the weak link of the team – bowling.

“I will try and observe how the team is shaping up and at this point of time, I would like to look at the bowlers. I want to get closer to the bowlers and understand their needs and requirements. Having done that, I can think of bringing in a fast bowling coach. I can contribute to the bowling area a lot,” he pointed.

The 45-year-old also believes that a bowler needs to be the leader of his own deliveries, set his own field and understand the movement of the ball.

“When I was a player, I used to feel I am the captain of my own bowling, which I would like to pass on the current bowlers. All of them must believe that they are leaders,” said Kumble, who picked up 619 Test and 332 ODI wickets in his 16-year career.

Communication is another strong point of Kumble apart from strategies.

It takes nothing to say ‘don’t worry’, believes the man who also has the record of bagging 10 wickets in a single innings in a Test match (against Pakistan) at Feroz Shah Kotla, New Delhi.

"I was dropped and not chosen for a tour, I understand being the most important member of the team to be dropped. I understand that communications during such times is critical for a coach to pick up the phone and say 'dont worry'. Hopefully I will succeed in communicating with the players,” he cited an example.

India cricketer Rohit Sharma – who is also the skipper of Mumbai Indians – described Kumble as the school whose motto is never give up.

Both of them spent a good time when the senior pro had a contract with the IPL franchise as a mentor.

“You have to keep fighting no matter what. If the game is slipping away from your hands, don’t give up till the last ball is bowled. That’s how he played his cricket. You will get the feeling that he was someone who wouldn’t let go too easily. That’s the kind of message that he wanted to send across. That’s the kind of message we also want as young players. He’s very inspiring,” says Rohit.

Kumble is the class of past, chic of the present, taste of the future.

All the best, Jumbo!