NEW DELHI: Sports Minister and Vijay Goel has run into trouble with the Rio Olympic organisers who have threatened to cancel his accreditation if the members of his entourage do not end their “aggressive and rude” behaviour.

The Continental Manager for Rio 2016 Organising Committee Sarah Peterson has written a strongly worded letter to the Indian Chef-de-Mission warning him about possible disciplinary action against the Minister, a senior BJP leader who is presently in Rio de Janeiro to oversee the requirements of the Indian contingent at the Games Village.

“We have had multiple reports of your Minister for Sports trying to enter accredited areas at venues with unaccredited individuals. When the staff try to explain that this is not allowed, they report that the people with the Minister have become aggressive and rude and sometimes push past our staff,” Sarah Peterson wrote.

“As you can understand, this type of behaviour is not acceptable. Despite previous warnings, it would seem that even today the same incident occurred at the Rio Olympic Arena (Gymnastics venue) and Carioca Arena 3,” she added.

“Should our protocol team be made aware of further examples of this type of behaviour, the accreditation of your Minister for Sports will be cancelled and his privileges at the Olympic Games withdrawn. We trust you will pass on this message urgently,” she said.

Vijay Goel has denied this, maintaining that he had all access card and was not aware of any such behaviour. 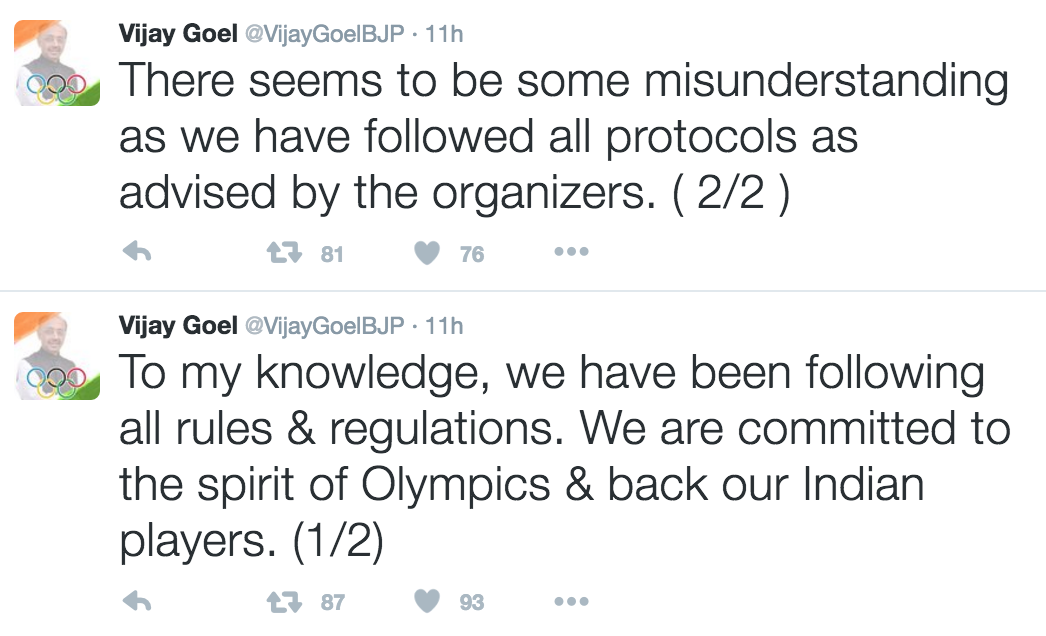 Goel, unsurprisingly, is facing a huge wave of condemnation. Here’s a look at the Twitter chatter.