TIFF 2016, in its 41st edition, starts its 11 days session on September 8 to an awe-inspiring over-kill of festival films. The Oscar contenders dominate but there is choice a-plenty in its sumptuous menu of different genres. The immense challenge is how and what to choose in this mammoth maze of films.

India is a good place to start. Its array of films and film professionals is wide scaled and impressive. There are as many as 16 such films featured in TIFF’s widely diverse sections. The India diaspora hits the top ranks and Indian actors (Victor Bannerjee, Anupam Kher, Suraj Sharma, Tannishtha Chatterjee, Roshan Seth) appear as marquee names in Hollywood and UK films).The selected features, shorts and documentaries come from within India and films from elsewhere that link with the country. Both testify that India has a cultural depiction unique to itself. 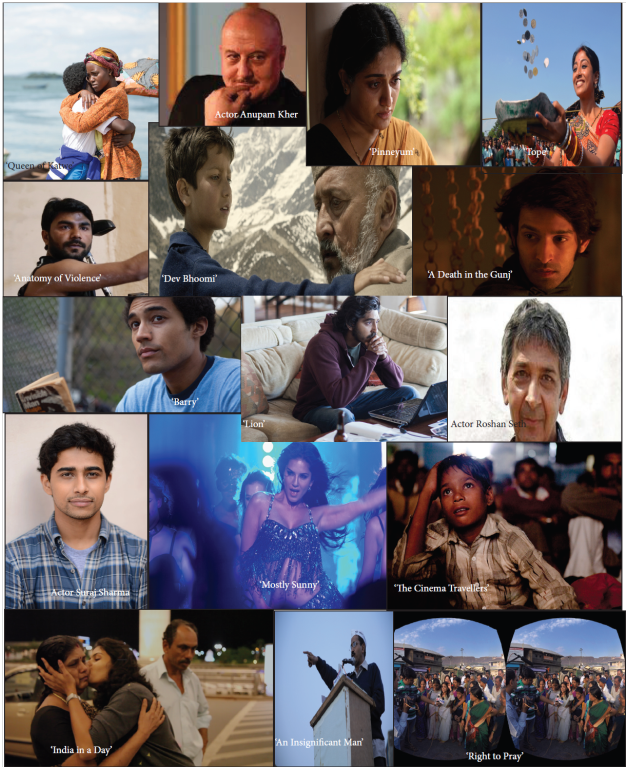 In TIFF Masters, two renowned names from India take centrestage. Adoor Gopalakrishnan emerges from a 8 year hibernation with the international premiere of his latest film ‘Pinneyum’ (Once Again), an internalised and complex emotional interplay of a loving couple torn apart by life’s vicissitudes. For once, this filmmaker looks outside his Kerala to cast the Marathi actor, Subodh Bhave.

Leading directors living abroad showcase films that take place in India. Deepa Mehta’s ‘Anatomy of Violence’ is deeply moving and thought provoking as it unveils its improvised exploration of the events that led to the Nirbhaya rape of 2012. From Serbia, Goran Paskaljevic sets his ‘Dev Bhoomi’ in a Himalayan village visited by a former inhabitant 40 years after it was hit by a severe landslide. Victor Banerjee has co-scripted the film and also plays the lead role.

TIFF’s Special Presentations is lit by Konkona Sensharma’s remarkable directorial debut, ‘A Death in the Gunj’, a coming of age story of a shy student whose family outing goes awry on many levels. Vikrant Massey, Kalki Koechlin and Ranvir Shorey head the cast. US-based Viram Gandhi’s first feature film ‘Barry’ harks back to 1981 as it follows the 20-year-old Barrack Obama’s pivotal junior year at Columbia University which shape his views on race and nationality.

Dev Patel and Tannishtha Chatterjee feature in Australian Garth Davis’ ‘Lion’, set mostly in chaotic Kolkata where a runaway boy finds adoptive parents in an Australian couple but later questions his real identity and place in life. Emotional turmoil stirred by an American 8-year-old mistaking himself to be a Mongolian goat-herder marks Jordon Roberts ‘Burn Your Maps’, with young Suraj Sharma in a major role. From the UK, Pete Travis’s ‘City of Tiny Lights’, a madly sinister caper into the murky aspects of London, features consummate actor, Roshan Seth.

The powerful TIFF Docs showcases some path-breaking films linked to India. Dilip Mehta’s ‘Mostly Sunny’ reflects with bewitching candour on Sunny Leone’s amazing life. Richie Mehta’s crowd-sourced ‘India in a Day’ sizzles through kaleidoscopic vignettes of just one day (October 10, 2015) across the canvas of our country. Shirley Abrahyam and Amit Madheshiya’s ‘The Cinema Travellers”, acclaimed at Cannes, brings the wonder of showmen on cinema lorries who brought movies to faraway villages in India.

Anand Gandhi as producer and director Khushboo Ranka present the rare Double Bill at TIFF. ‘An Insignificant Man’ directed by Ranka and Vinay Shukla, provide insights into Arvind Kejriwal over two significant years of his political ascendence. ‘Right to Pray’, directed by Ranka, travels to Trimbak’s Trimbakeshwar Temple where female activists fight against regressive forces of patriarchy and tradition which debars their entry into its inner sanctum.

Besides the films that showcase Indian talent at its best, there are speakers and panellists such as Mira Nair conducting a Masterclass, Freida Pinto espousing the cause of Dialogues:Women at the Helm – Because it is 2016!, Karan Johar – In Conversation, and Bina Paul, now Vice Chairperson of Kerala State Chalachitra Academy, on the Netpac Jury.

This 2016 mega Indian showcase at one of the most valued film venues of the world suggests that maybe, at last, the country’s many cinemas are coming into their own, outshining the glitz of Bollywood. And about time, too!