The word ‘parched’ has a wide range of meanings which boil down to the same thing – “searing, scorching, blistering, flaming, blazing hot, baking, burning, fiery, torrid and withering.” The story is placed in contemporary times within the remote heartlands of Rajasthan that partly explains the ambience and the climate of the place that is parched, devoid of the moisture and wetness the rains bring in, lack of water bodies and so on.

Another meaning of “parched” applies to an individual’s thirst, of dehydration from lack of water which, in this film, reaches beyond its physical dimensions to describe the “parched” lives women and girls – thirsty for love, for a sense of belonging, for a degree of self-esteem and in this film, most importantly, the desperate thirst for sex. This collective thirst simmers inside the woman to finally burst into tongues of a fiery fire, consuming the very environment that has smothered their existence for so long.

There is a further meaning if you care to look for it. The men in the village are live, human personifications of ‘dryness’ and lack of ‘moisture’ who hardly earn a living or contribute in housework. Yet, they retain the right to decide that a young girl of the village must go back to her husband who does not touch her, has a woman on the side and keeps silent when his wife is raped by his father and his brother every night because it is her duty to live or die in the husband’s house. They are too stupid to label Naobi, a Manipuri girl as a “foreigner” spoiling the minds of the village women by helping them to get work. 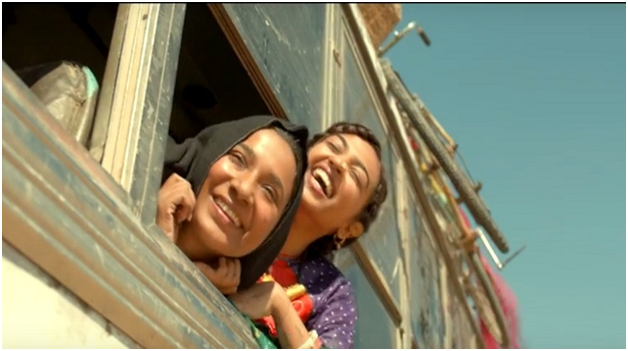 After screening at 24 film festivals across the world, Leena Yadav’s third feature film Parched (Hindi) has finally struck tent on home ground. Parched explores, analyses, tries to understand and communicate to the audience this feeling of desperate thirst women are forced to face, never mind whether it is Janaki, a girl of 14 who chops off her lustrous stresses to avoid being married off to Gulab against her wishes, in vain, or, whether it is the 32-year-old widow Rani, convinced that the only way to rescue her son Gulab from frequenting prostitutes and incurring huge loans is to marry him off to the beautiful Janaki.

Lajjo, Rani’s best friend is a pretty young wife bashed up brutally by husband Madan who uses sex as a horrific weapon of attack to punish her for her ‘barrenness’ every night. Bijlee is the local sex worker who entertains the village males with her pole dance as the star of the touring carnival that strikes tent in the village. She is a sparkling beauty and crackles like fireworks with her naughty, teasing charm she veils her inner pain with. She throws up alternative ways of behaviour and thinking, changing female-prefixed abuses men generously use by substituting them with male prefixes and shouting these from the top of a hillock with her friends. Bijlee offers visions of freedom to Lajjo and Rani from the prison they are caged in. But simmering inside her is the pain of the trap that for her, is a no-exit situation where love is as much a mirage as it is for Rani and Lajjo.

The entire story unfolds like a speeding train rushing through the parched deserts of Rajasthan to halt at small, wayside stations for that desperate drink of water with long shots of the women laughing away and running through the brown sands in their colourful, mirrored ghagras and black widow’s weeds with the odhnis pulled over their heads alternating with the twinkling lights of the carnival and the wedding place. The shimmering and skimpy costumes Bijlee wears does not stop her from being gang-rape by four village ruffians and she writhes in pain from the impact.

Russell Carpenter’s cinematography enhances the visual beauty of the terrains without cutting into the real impact of the content and the characters in any way. It is one of the greatest highlights of the film. The horizon and the scenario change in terms of brightness, in terms of its use of light, colour, shadows, silhouettes of a skinny dipping Lajjo against the wide expanse of the desert landscape placing the characters in perspective.

The colours of Rajasthan are captured beautifully in the lighting of the tent with the dance shows, the décor of the huts, the red chillies spread out to dry in the sun, the décor of the huts, juxtaposed against the dark interiors of the cave and the shimmering waters of a small water space where within a brief collage of sequences, Lajjo’s life changes forever. The music and the songs are also cantered on the changing moods of the film. If one takes a closer look at the script, one may discover layers of cinematic coincidences and touches of melodrama but they are made to jell seamlessly into the main narrative.

Parched throws up an outstanding and unconventional vision of the sex-starved lives of these women, across age, occupation and courage or the lack of it. These colourful women derive vicarious thrill by talking dirty, talking sex in their own way, in their own language and laughing at their own jokes. It destroys the myth about unlettered women of the village being naïve and simple. Rani has a ‘ghost’ caller who identifies himself as “Shahrukh Khan,” and in spite of being egged on by Lajjo to have some fun, she holds her ground till the end even when he confesses that he is 42 and suffers from knee pain and is not the strapping young man she might be thinking he is. But they never meet and this small distraction gives Rani a better understanding of the teenager Janaki who can read, wishes to study further and has a devoted lover waiting to take her away to a life of freedom.

Parched paints the lives of the men in the village mainly as parasites living off their women’s earnings and spending whatever they earn on liqueur and women. These men believe that the village should not have any television set because that would give ‘ideas’ to the women and also that girls should never be ‘allowed’ to study lest they get ‘ideas.’ So, the women who earn from their skills in embroidery and stitching decide to pool part of their earnings and buy the village’s first community television set. But the ribbon is cut by the male leader though the village has a female sarpanch!

Hitesh Sonik’s music compositions define an ideal blend of Rajasthani folk and festive music with the song and dance numbers Bijlee and the other girl perform within the tent. Kevin Trent’s editing offers a model lesson in how the film can be cut just at the right places and yet elaborately and effectively establish a symbiotic whole by blending into the story, the characters and the landscape. The film has some melodramatic touches but Yadav and so seamlessly woven them into the mains story that they lose their usually cliché quality. The carnival car decorated with kitsch art is flagged by a pair of beautiful wooden wings, a metaphor for freedom. Bijlee keeps ‘borrowing’ the carriage without permission but in the end, she drives away to freedom in the company of her friends.

The characters are so fully fleshed out, each with his/her distinct nature that one does not feel that these are actors enacting given roles in a given film. Riddhi Sen’s Gulab is as hateful as is Lajjo’s husband Madan and the pimp who pretends to be in love with Bijlee but has a different axe to grind – to leave the carnival and establish an independent ‘business’ with Bijlee. When Lajjo is escorted by Bijlee into the cave where she meets her mysterious male mate to prove her fertility never mind if it is even to herself, she at once spreads her legs for the act because foreplay like kissing and caressing and talking while making love are non-existent in her vocabulary of sex. She is amazed when the man begins to caress and fondle her. Tannishtha Chatterjee as Rani, Radhika Apte as Lajjo, Lehar Khan as Janaki and Suvidha Chawla as Bijlee deliver characters that will haunt us for a long time. Chawla specifically, is the most lovable, the boldest and the most radical entertainer and sex worker one has encountered in a long time in Indian cinema. She has no sad story of having been forced into the trade or being trafficked by some agent. She wears her profession without either embarrassment or guilt and in a moving scene, understands that she has embarrassed Rani by coming uninvited to attend Rani’s son Gulab’s marriage. What a mind-blowing performance.

A woman’s hair plays a symbolic role in the film. Janaki chops off her beautiful hair and is brutally raped by her teenaged husband Gulab when he discovers that she was wearing a wig. Bijlee has beautiful, lustrous and tinted hair but for her, it is a means to an end – an agency that helps her earn her daily bread. In the end, when Rani and Lajjo ride away from the village with Bijlee at the wheel, we discover that they have chopped off her hair too, and they gloat in their scraggy and short hair happily, into destination unknown. Parched offers us a glimpse of a lifestyle that can be termed ‘fragmented reality.’ But it is no less shocking or scary than what real life threatens us with.