Durga Pooja in Kolkata: Of Culture and Markets

Frenzy, fun, frolic, food, funky fashion and festival. These six ‘F’ words do little justice to the vibrant mod and colourful spirit of the Durga Pooja in Kolkata.

Durga Pooja here is not just an annual festival like Diwali or Holi. It is a culture and a lifestyle that metamorphoses the entire city into a massive cultural hub of noise, music, fun, food, crowds and pandals.

There is one ancient community Pooja in Park Circus where Hindus and Muslims celebrate the Pooja jointly over the five days of the festival. Cooperative housing societies celebrate their small collective poojas with a festive lunch and dinner spread out for the residents for all the five days. Aristocratic royal families continue to celebrate the Pooja in traditional style. The Sovabazar Rajbari celebrated its 250th year last year while the Mitrabari Pooja entered into its 200th year.

Kumartuli, the nerve centre of the clay idol-makers of West Bengal, is home and workshop to more than 200 families of clay model-makers. Criss-crossed by a maze of narrow gullies men, women, children and images of gods and goddesses, alike, have to find their way out through these dingy lanes. 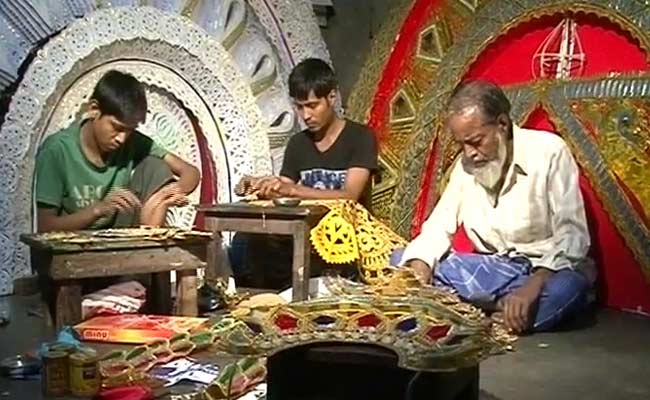 In 1790, as recorded in the Friend of India (now The Statesman), a dozen Brahmins formed the first ever committee to celebrate Durga Puja in Calcutta. They collected money in the form of a punitive tax (subscription), had the image of the deity made at Kumartuli and organized the first ever community Durga Puja festival. As the trend caught on, making images of gods and goddesses became a lucrative livelihood for the potter-turned-artisan.

Over the years, the festival has acquired a secular, national and Pan-Indian identity reflected in many different ways. At Park Circus, there is a big Durga Pooja organized by Hindus and Muslins together and there has never been any conflict till this day. Somewhere in a remote corner of Howrah, an old Muslim insists on performing and participating in a local Durga Pooja patronized by his family for decades together. They remain Muslim but they do not isolate the Goddess because she represents Hinduism.

A particular North Calcutta Pooja commonly called the Lohapatti Sarbajanin that bags top awards every year, is organized, performed and funded entirely by business families from the Marwari-speaking community who originally dealt in iron (so the name Lohapatti) and if you happen to visit this Pooja, you will be amazed by the beauty and the disciplined organization of the idol, the pandal and the crowds.

Today, the idol of the goddess is incredibly innovative in choice of theme and artistic expression. Durga idols are shaped out of sand, bamboo, coins, coconut shells, bangles, lozenges, biscuits, wooden peelings, papier mache, conch shells, glass, grains, pulses, corn, steel, dokra, cane, the works alongside the traditional trends of terra cotta, thermocole, Ganges clay, etc. Media houses and corporate firms awsard prizes for the best pandal, the most ecological concept, the best lighting, the best idol, the best music, the best recreation of a lost culture, and so on. 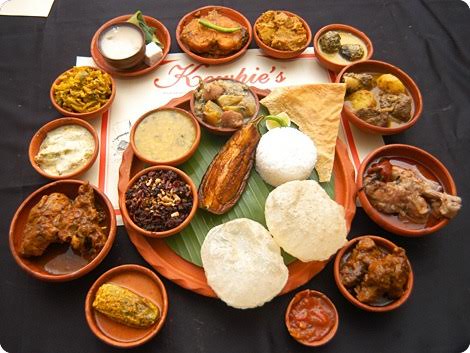 Recreation of ‘lost’ and ‘other’ cultures involve painstaking research on the Chamundeshwari Temple of Mysore recreated in one collective Pooja. Another famous Pooja recreated the lives and lifestyles of nomadic gypsies of the Raan of Kutch with walls made of straw and clay, geometrical figures of men and women crafted out of dried palm branches and leaves. In one pandal, the organizers paid homage to the maize farmers of Punjab and used 15000 pieces of corn (bhutta) to create the pandal décor and the idols of Durga with her children.

There are idols crafted after Greek mythological characters, Japanese concepts brought to fruition with explanations on bill boards announcing the same, and so on. This year, one particular Pooja Mandap has advertised a huge Durga with thousand arms sticking out of the goddess figure.

All homes in Kolkata lock up the kitchen for five days. They eat out at the hundreds of restaurants that lay out a wonderful spread during the festival. Street corners are dotted with food of every culture ranging from the everyday chaat, bhel, phuchka, idlis, dosas, medu vadas, and aloo chop with non-veg stuff such as rolls, cutlets, egg-curry, Chinese, Thai, Continental, Moghlai and Punjabi. Models and stars throw their diet charts away to lick and bite into some of the best delicacies the city is flooded with at prices to suit every pocket.

Then there is what we now call Fusion Food which actually, is a sophisticated name for “bhelpuri’ – a mishmash of everything metaphorically speaking. The streets are forever teeming with crowds that must separate the men and the women with long ropes when they approach a pandal. Sometimes, love stories are born in popular neighbourhood poojas with some leading to the altar and others fading away with the immersion of the goddess.

Celebrities, mostly young and famous and rich, from the film and television industry and also from intellectual worlds of creativity, have a field day with invites to cut the red ribbon and declare a local Pooja ‘open.” They are paid a handsome amount for agreeing to unveil the Pooja. And this extends to other towns and cities in West Bengal such as Durgapur and Kharagpur.

These days, one witnesses even Coke Addas where film stars gather to discuss empty nothings not into each other’s ears but in front of a star-crazy public that is publicized widely in city tabloids before, during and after the Coke Addas. A young star who wished to remain unnamed said, “You cannot imagine how much we can make during these Poojas everywhere. These days, the ‘pooja’ begins a month before the actual day of Shashthi with what is popularly known as Khoonti Pooja which means that the foundation is laid for every single pooja by digging a hole in the venue and drilling a long bamboo pole into it to the sound of music and conch shells and bells.”

For this too, film and television stars are in big demand and depending on the demand, they negotiate their rates of visiting because the media is bound to be there and the club pooja gets free publicity.

Every single television channel in West Bengal, including the news channels, is flush with wide and in-depth coverage of the poojas across the city and beyond Kolkata focusing on every single aspect of the festival – bhog, prasad, anjali, arati, special guests, the pandal décor themes, the sculptors who have created the idols, the person/persons who has/have conceived of the thematic ideology behind a pandal, the idol itself, the crowds, the lights in the evenings and the teeming crowds rushing in through one entry and going out through another exit point.

New Pooja records are created with singers and musicians pitching in from Bollywood and other places and these audio releases are held in five star hotels with grand feasting. New Bengali films are released during the Poojas which is not quite right because crowds find it difficult to access the theatres due to heavy traffic and they seem more interested in taking in as many “viewings” of the Mother Goddess and her children than in watching a new film that can be seen later.

Designers, branded and indigenous, pull up their socks and begin to prepare at least three months before the festival is to begin. Fashion statements are defined largely by global fusion with denim used as patchwork on cotton kurtis embellished with kantha embroidery or saris designed with a blend of patchwork, mirror-work, kantha and shimmer. Appointments for facials, hair tinting, pedicures and manicures must be booked at least a month in advance if you want to look your best. I forgot to add that this is one festival where the fun, the ambience, the spirit and the mood overshadow the rituals of the pooja and the worship.

To quote actor Dhritimaan Chatterjee who made his debut in Satyahit Ray’s Pratidwandi and was recently seen playing the confused judge in Shoojit Sircar’s Pink says, tongue firmly in cheek, “who said that the Bengali is very bad at business? Just take a look at how he has converted the Goddess Durga and her children into the biggest commercial product in West Bengal?”

Got that readers? Now go and enjoy the dhunuchi naach which our own Sunjay Dutt performed with such great gusto in Parineeta some years ago. But it is first a culture Mr. Chatterjee and if this also brings in some business, we do not think the Goddess is displeased. Imagine the volume of employment, albeit temporarily, the festival creates for a large number of skilled workers who remain unemployed for a major slice of the year.

The pandal-makers, the idol makers, the priests and their assistants, the artistes who perform at the entertainment programme in the evenings, the decorators of the idols, the flower sellers, the pooja rituals markets, the drummers who come in from other places and land at Sealdah to stay on till after Kali Pooja, are twice blessed by the Goddess – once through her direct blessings and again through the jobs she blesses them with.