Shakespeare, The Flavour of Indian Cinema

Had William Shakespeare got the faintest clue on the popularity of his works among Indian filmmakers, he would perhaps have been the most surprised because it has been 450 years since he passed on but he has passed on more than just his works.

He has inspired several generations of filmmakers across the world with ideas through his plays which offer some of the best ingredients for a mainstream film in any language that could belong to any culture, ethnic backdrop, time-space paradigms, relationships and so on.

His works have the universality to transcend the confines of the written word, albeit in an English that is no longer in vogue, with characters that belong to a different era and a different culture and backdrop altogether. 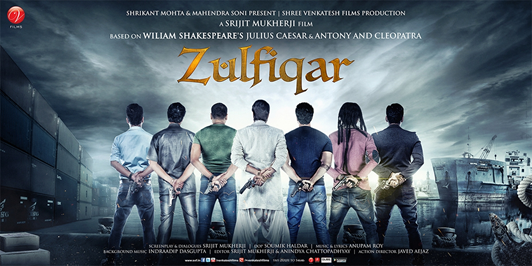 This article is provoked by the recent Bengali release Zulfiqar, directed by Srijit Mukherjee which is an imaginative amalgam of William Shakespeare’s Julius Caesar and Antony and Cleopatra in which he tries desperately to achieve the impossible in terms of remaining loyal to Shakespeare’s original plays and yet, trying to contemporise it by bringing it forward to the present day and justifying the time-leap with a space leap as well – bringing to an underbelly of a Kolkata we know about but only through media headlines but have not witnessed in reality.

Zulfiqar is not a story of a clash of egos and the fight over power but deals in most contemporary terms, with the world of organised crime centralized near the ports of the city that defines the mafia neighbourhood by reason of its accessibility to mafia activities like drug-running, arms-smuggling and the passing peck on the cheek of the politics and the political parties that run the state. It is a much glamorised mish-mash of violence, adultery, the constant fight between evil and evil, that throws off the character of Mark Antony split into two, one named Antony, a Christian a long-haired linguist who converses fluently in Hindi, English and Bengali and Marcus, a Muslim who is mute but not deaf. They are brothers born of two different mothers and are so inseparable that Antony decides to become the physical voice of Marcus.

In their wonderfully edited book, Shakespeare and the Ethics of Appropriation, (Palgrave MacMillan 2014) Alexa Huang and Elizabeth Rivlin write, “Reproducing Shakespeare marks the turn in adaptation studies toward recontextualization, reformatting, and media convergence. It builds on two decades of growing interest in the “afterlife” of Shakespeare, showcasing some of the best new work of this kind currently being produced.” However, this book deals mostly with replications in literature, theatrical performances and so on and there is little reference to cinema and absolutely no reference to Indian film adaptations of Shakespeare’s works. 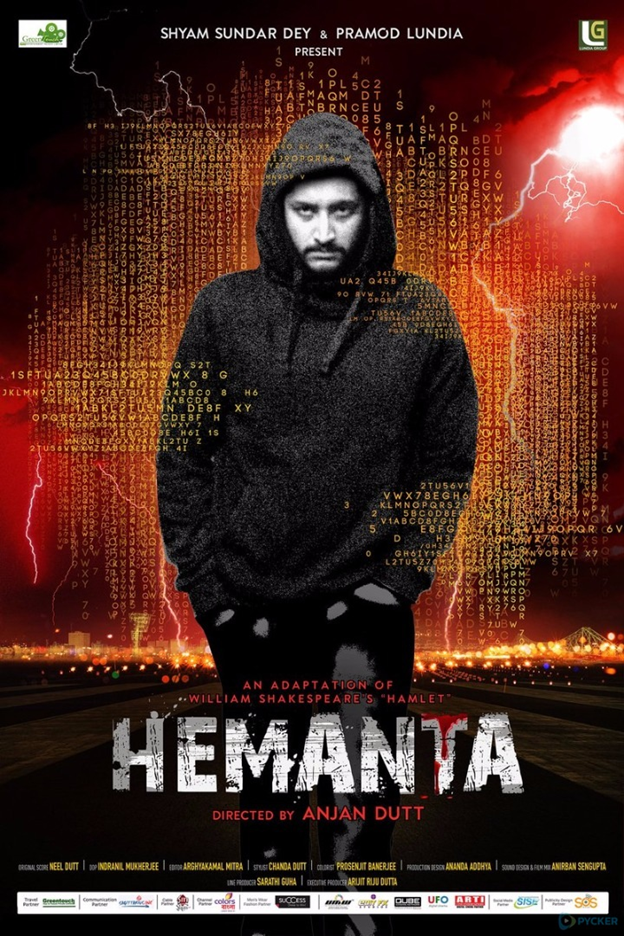 When did this passion for representing Shakespeare on film begin? The history of cinema reflecting Shakespeare goes back to Ganasundari Katha (1949), flashing forward to Angoor directed by Gulzar (1982), adapted from A Comedy of Errors through Kannaki (2001), dotted with a beautiful ‘punctuation’ like a scene from Shakespeare’s Othello dramatised within the film in the Bengali classic Saptapadi (1961) till today when Shakespeare has acquired the status of a genre within cinema and cinema studies across the world.

Dr. Mukesh Yadav, in his paper – Domesticating Shakespeare – A Study of Indian Adaptation of Shakespeare in Popular Culture (European Journal of English Language and Literature Studies, Vol.2, No.3, pp.48-58, September 2014) scrutinizes how Indian imagination has actually absorbed Shakespeare within its performing and cinematic systems. His paper deals with recent four Shakespearean adaptations in Indian cinema: Vishal Bhardwaj’s Maqbool (2004) adapted from Macbeth, Omkara (2006) based on Othello, Manish Tiwari’s Issaq (2012), based on Romeo and Juliet), Malayalam filmmaker V.K. Prakash’s Karamyogi (2012) adapted from Hamlet. “These films achieved great success in India and has domesticated Shakespeare like never before. Yadav explores strategies through which cinematic representation functions to ratify the existing social order and analyses the ideology that governs the production of the film and the meanings that are transmitted through it,” says Yadav.

Parthajit Baruah, a noted film critic who has done considerable research on cinematic interpretations and transpositions of Shakespeare’s works in Assam, says, “The critical acclaim that Shakespeare has attained in this country is not new and ‘sudden’. The Shakespearean motifs have long been inspired the Indian film-makers, although it is Vishal Bhardwaj who explicitly engaged with the themes of some of the Bard’s great tragedies. The reason is the universality of Shakespearean characters and human conditions represented by them. Another reason may be an Oriental fascination for Western masters, where Shakespeare is just an image of the West and its literary products. 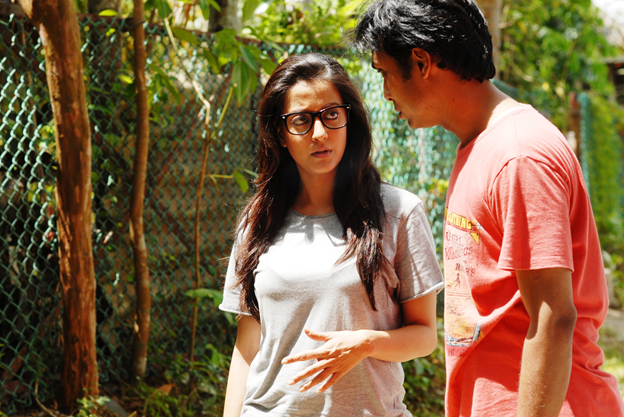 “This, however cannot be simply defined in terms of outcome of an Imperialist project, where Shakespeare is Orientalized because Shakespeare has been carried across languages and cultures in a such way that his motifs have become universal --- they no longer belong to the West in the present context. In London, I read a paper showing how Shakespeare’s plays and Assamese cinema, in spite of the vast differences in time of creation and background, bear parallel sensibilities in the way they express the socio-political impression of their times.

So much has this “Shakespeare Fever” flooded the academic world that in April this year, an international conference titled “Indian Shakespeare on Screen” was launched at the Asia House in London to explore the way in which Indian cinema has mobilized Shakespeare to raise urgent local and national concerns. This was complemented with an exhibition followed by a week-end festival at the BFI South Bank in London where Vishal Bharadwaj’s Shakespeare Trilogy was screened with direct interactions with the director and scriptwriter of these films. 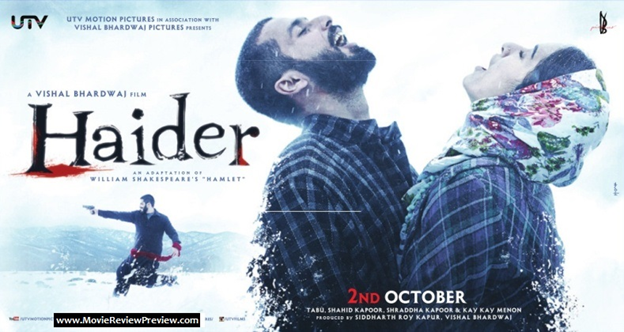 Yadav rightly points out the following probable reasons for the popularity of Shakespeare in India within performance in different ways, within the world of literary translations, within Indian language works inspired by Shakespeare and within cinema as follows:

(b) The colonial education system in India was filled with western texts, including Shakespeare.

(c) A proliferation of Western literature, mainly Shakespeare within the colonial education system was important for a political reason too

(d) Shakespeare was included in the colonial curricula not only as the exemplary figure of literary and artistic greatness, but also because his works demonstrated the core values of Western traditions

(e) By the twentieth century, Shakespeare had been translated, adapted, and assimilated into many Indian languages, and writers and performances in the general Indian cultural landscape were contributing to sustaining his presence.

(f) Indian authors ranging from every major Indian language have written about his works, translated and adapted them and/or been influenced by them.

(g) The Parsi Theatre drew liberally on the works of Shakespeare for inspiration.

(h) Theme, characterisation, genre, structure—there are many ways in which the works of Shakespeare have influenced and have been absorbed in Indian literature and culture

(i) Developments in translation and adaptation studies, performance and cultural studies and the spread of globalisation and internationalism have problematized the way we negotiate this relationship.

However, to go back to the specificity of Indian films adapted/ Indianised/ relocated/ contemporised in terms of time and space gets back to the question of the commercial viability of Shakespeare in contemporary Indian cinema. Academics, film scholars, critics and even filmmakers will agree that Shakespeare’s works have all the ingredients for a box office hit. There is romance; there is greed for power that leads to massive conflicts and ego-hassles, sex, titillation in subtle and not-so-subtle manifestations, graphic violence, murder, back-stabbing, glamour and chutzpah and the potential for music, song and dance. What more can a filmmaker want, tell me?

Apart from Maqbool which did not exactly feature top-selling stars, Vishaal Bharadwaj’s Omkara and Haider featured some of the top-ranking stars in Bollywood. Maqbool was a striking, Mafia-based take on Macbeth audacious, arrogant and ambitious, departing from the original text without diluting the spirit and essence of Shakespeare’s original play. Irrfan Khan, Tabu, Pankaj Kapur were not as top-notch as they later became. Add to the trilogy the unique composing talent of Vishal Bharadwaj as music director where he skilfully masters the rudiments of different schools of music to create his own to jell into the fabric of the film.

However, those who lack the magic to transform a Shakespeare original to box office success have hardly been able to fill in the coffers with their films. One that deserves mention is debutant director Sharat Kataria’s adaptation of A Midsummer Night’s Dream to 10 ml Love did not work at all though it could be defined as a film that could have stood on its own because of its lovely backdrop of a big Punjabi wedding that is a distance from the original. This is an example of how filmmakers inspired by Shakespeare’s works can easily allow themselves to remain ‘inspired’ and with that foundation, build their own superstructure that become independent films unto themselves.

Aparna Sen’s Aarshinagar, said to have been adapted from Romeo and Juliet is the most sharply edged, incisive political comment by the director in her first ever no-holds-barred mainstream entertainment film over a directorial oeuvre of 35 years. The sharpness, one must concede is somewhat blunted by the frothy romance of the contemporized, Bengali avatars of Shakespeare’s Romeo and Juliet. It is the music, the songs and the lyrics that define the political content of the script, authored by Sen herself. Add to this the imaginatively created rhyming dialogue that spikes the entertainment value and gives the film an added dimension.

The Shakespearian parallel in Aarshinagar should have been kept out. It scared off the mass audience and sent the intellectuals on a fault-finding crusade. Arshinagar belongs entirely to Aparna Sen. And so does Srijit Mukherjee’s Zulfiqar, or, Anjan Dutt’s Hemanta (Hamlet) and Ranjan Ghosh’s Hrid Majharey (Othello) which stand perfectly as individual expressions of emotions, drama, song and music without the Shakespearean allegory.

The same goes for the Vishaal Bharadwaj trilogy. In fact, since around 50% of the cinema-going public would probably never heard the name of Shakespeare, the reference would not carry any weight. But then, they would not have featured at international conferences and seminars on Shakespeare in Cinema.

Is Shakespeare turning in his grave? Think about it.