'Hargila Army' Led By A Woman Saves the Stork!

GUWAHATI: Purnima Devi Barman, a wildlife biologist and conservationist from Assam, has been honoured for her enormous efforts for wildlife conservation.

Barman who has worked tirelessly at the grassroots and motivated groups of women and youths in rural areas has won the RBS Earth Hero Award 2016.

She has been instrumental in conservation of Greater Adjutant Stork, evaluated as endangered on the IUCN (International Union for Conservation of Nature and Natural Resources) Red List of Threatened Species.

Barman, who has motivated groups of women in some villages in Kamrup district for the conservation of this species, was given the award under ‘Save the Species’.

“It’s indeed been an honour for me to be here and receive the award. I think it will motivate the people who are working for the cause of environment. I’m grateful to the RBS foundation and jury members for choosing me for the recognition,” Barman said after receiving her award under ‘Save the Species’ category in New Delhi recently. 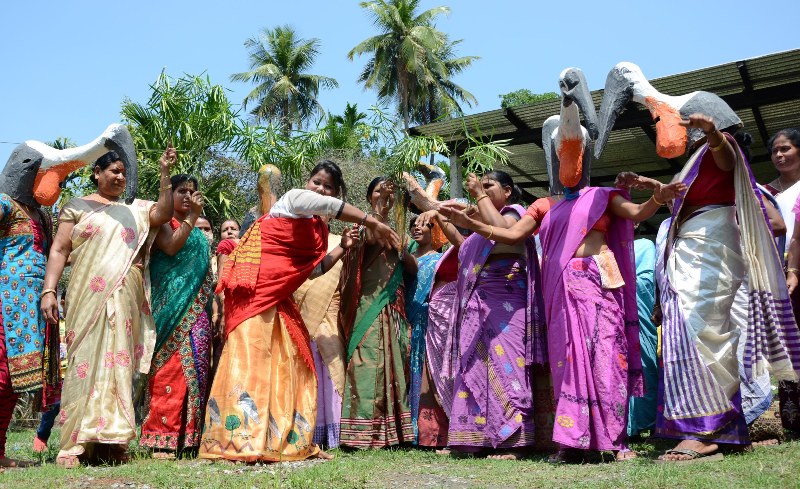 An elated Barman has dedicated her award for the village committees of Dadara and Pachariya village in Assam’s Kamrup district who have been working with her for conservation of Greater Adjutant Stork, Sankardev Sishu Niketan of Dadara, the police and administration of Kamrup district and Assam State Zoo and Conservation programme besides her team members.

“I’m so happy today that our efforts have been recognized and it’s only possible with the cooperation from all and everyone. So, I want to share my happiness with everybody associated with the work,” said Barman who is associated with Aaranyak, a Guwahati based NGO which works for wildlife conservation.

She has been working in areas in Kamrup district for the last several years and encouraged the village women towards the conservation.

According to the IUCN the total population of grater adjutant stork is estimated to be from 1,200 to 1,800 individuals in total. The IUCN which is world’s oldest and largest global environmental network, further says that around 800 birds are found in Assam and at least 156 birds in Bihar. Besides, around 200 birds in found Cambodia.

Barman’s journey towards conservation started way back in 2008 when she was a PhD student. She happened to visit the Dadara and Pachariya village for her research work but witnessing the plight of the species in that area she decided to start her mission.

Initially it was pretty difficult for Barman to convince the locals for the protection of the Greater Adjutant Stork as this species was regarded as omen of ill luck.

“The scenario was very pathetic for the birds. The villagers did not want to see the birds in their campuses. They would think that as a carnivorous bird, it would bring carcass and other rotten stuff. Thus they would cut the trees where these birds used to build nests. But after pro-longed efforts, thankfully, now they have realized the importance of it,” Barman said.

Barman won the confidence of womenfolk of the area and started her mission. “I gathered the village women and shared my views. I also conducted several games and competitions like cooking among the girls and women so that I can win their confidence. I wanted to make them feel that these birds are their own,” she added.

After this Barman formed a group consists of 70 odd women named ‘Hargila Army’ in 2015. Greater Adjutant Stork is locally known as ‘Hargila’.

Now, these women of the village work as the protector of Greater Adjutant Stork, taking all the necessary care.

“Earlier, the villagers did not realize the importance of the bird species. Many thought that this bird brings ill luck or similar things. But now we are more aware and everybody in the village is working for conservation not just for greater adjutant storks but for other birds and animals as well,” said Pratibha Das, a member of the group.

According to Barman, from 2010 not a single tree has been cut in that locality. “In 2006-07 we found that there were only 15 nests but in the year 2015, when we surveyed, we found 171 nests. This itself tells the dedication of the villagers and I’m extremely happy with the result,” Barman added.