Kali of Kalighat: A Beacon Of Secularism

We live in an ambience where a secular state of mind has become either a distant dream or an Utopian reality of what once was. Newspaper headlines are flush with news that go against every conception of secularism that exists in our mindsets. If it is Rohith Vemula today, it is the innocent Akhlaque of Dadri tomorrow and the violence continues. Within this social reality of bloodshed and killings, the Kali temple of Kalighat brings in a ray of hope even in the midst of blind faith and some chasing by the Pandas of the temple. Let us take a closer look.

The doors of the Kali temple at Kalighat are open to all god’s men, women and children. Though the temple is historically, socially and culturally a Bengali place of worship where Bengalis form the prevailing majority of the pilgrims, Kalighat draws visitors from all language, communal and ethnic groups across the country and beyond. These pilgrims come in culturally segregated groups with a guide to escort them. They share the common feeling of visiting one of the most important and religiously ‘alive’ temples in the country. Many of the Sevayats and Pandas have acquired skills in different languages to enhance their interactive communication with the pilgrims. This specially applies to Hindi, Oriya, English and perhaps a smattering of Tamil.

Europeans living in Calcutta during the British regime history states, made offerings to Kali at Kalighat, soliciting favours. The British believed in the Hindu devotee’s conviction that the ‘live’ Goddess Kali could magically fulfil the wishes and aspirations of those who came at her door in prayer. Some of these factual tales are recorded in Life and Times of Carey Marshman and Ward. John Marshman recounts a deputation from the government, which “went in procession to Kalighat and made a thanks-offering to this goddess of the Hindus, in the name of the (East India) Company, for this success which the English has lately obtained in the country. The offerings amounted to Rs.5000. Several thousand natives witnessed the English presenting their offerings to this idol.”

The Reverend James Ward, chaplain of St. John’s Church in Calcutta in the early years of the 19th century, informs us that the density of population in and around Kalighat temple was greater than that of other areas in Calcutta. Apart from 30 Sevayat families, at least 200 families who lived in the area depended directly from temple-related activities for their earnings. With time, as rituals of worship became more elaborate and detailed, the temple gained importance among local devotees and arriving pilgrims, leading to a rise in the number of Sevayats and some changes in the rules and regulations in keeping with the changing demand of the changing times.

In an anecdote dating back to 1803, Ward talks about the first marriage between Indian-born Christians having taken place in Serampore. The groom, Krishnaprasad, was a Brahmin-converted to Christianity while the bride was born into the lower Sudra caste family that had become Christians. The marriage ceremony was conducted under the shade of a tree under the personal supervision of the three missionaries known as the Serampore triumvirate, namely William Carey, Marshman and Ward. The success of the ceremony inspired the East India Company to send a group of its representatives to make pooja offerings valued at Rs.5000.00 to Goddess Kali at Kalighat Temple Road. Ward also writes: “Around 300-400 Muslims come to offer worship to Kali at the Kalighat temple every month.” 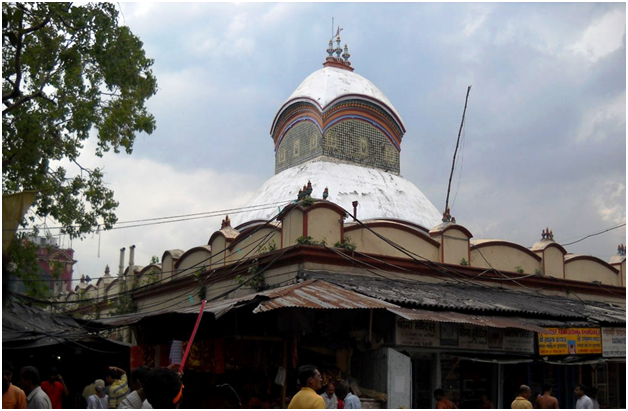 Within a year or two of the Treaty of Amiens, the British community officially marched down to Kalighat, accompanied by military bands, to present a substantial sum of money to the goddess in her temple as a thanksgiving for an end to a period of war with France.

On December 11/12, 1910, the British government, on instructions from King George VI himself, had planned a Durbar to honour distinguished British officers and outstanding Indians for their excellence in different fields. Among the awardees was Mr. Lindsay, joint secretary of the Calcutta Club who won the Kaiser-I-Hind Gold Medal and Mr. Justice Asutosh Mukherjee who was bestowed knighthood by the British Empire.

This was suspected to be a sort of cushioning the anticipated negative reactions of the people in Calcutta and the Britons in England to the King’s decision to shift the British capital from Calcutta to Delhi. Only a dozen people in each country were aware of what was to happen. The occasion included the announcement of a Royal Clemency for 651 prisoners held in Calcutta prisons. Among them were ten Europeans and a couple of political detainees. The minute they were released, many of the freed prisoners went straight down to Kalighat, bathed in the water of the Ganges and offered a sacrifice to Kali.

Among classic examples of the secular and international nature of Goddess Kali and Kalighat is that while the Kali temple at Dakshineswar on the outskirts of Calcutta never allowed Sister Nivedita entry into the temple, on grounds that she was a mlechcho, she was welcomed with open arms at Kalighat. Surprisingly however, Sri Sri Saradamoyee, wife of Sri Sri Ramakrishna Paramhamsa, had accepted Nivedita as the daughter she never had. This made Nivedita’s guru Swami Vivekananda unhappy. So it came as a pleasant surprise when Kalighat temple invited Sister Nivedita to come and deliver a speech. With the kind permission of Swamiji, Sister Nivedita visited Kalighat and delivered a lecture at the Naatmandir on May 28, 1898.

The Goddess Kali of Kalighat does not discriminate between the rich and the poor. If the rich bestow the goddess with gold and silver, the poor can approach her with nothing but pure devotion. They believe that their prayers will still be granted. With time and the modernization of transport and communications, a large number of specialists, both sacred and secular, have gathered around the temple to cater to the religious and other mundane needs of the pilgrims.

Vested interests of a certain class of people with pretensions to spiritual, supernatural and Tantrik powers have tried from time to time, to blacken the name of the place. Along with these self-proclaimed ‘specialists’ are some owners of shops, hotels and restaurants in the area, and beggars, who try to perpetuate supernatural myths around the temple that have no connection with either the Goddess or with the Kalighat temple per se.

A random survey of 222 people arriving at Kalighat from different parts of the country and other minorities done in 1967 revealed that people came from Mysore, Punjab, Tamil Nadu, Andhra Pradesh, Rajasthan, Gujarat, U.P., Bihar, Orissa and different parts of Bengal besides a sprinkling of pilgrims from Sikkim and Nepal and a couple of Chinese devotees. The castes included those constitutionally labelled under different categories of Scheduled Castes and Scheduled Tribes. Among religious minorities in Hindu sub-castes were Shaktas, Shaivites, Vaishnavites along with Sikhs, Jains and Buddhists.

Sinha laments that the “sacred specialists have shown considerable resilience in accepting and accommodating the dominant trends of change in the larger society such as changes in the class of patrons and pilgrims, abolition of untouchability, democratization of management and meeting the new demands for ritual assurance of safety and success in modern professions such as medicine, engineering, law and politics.” He is sad about ritual specialists who reinforce supernatural beliefs and non-existent, fictitious myths that that have no basis in scientific fact. These have gained currency surrounding the Goddess Kali and the Kalighat temple with a dark cloud.

Anti-socials out to make a quick buck out of unsuspecting visitors also try to make money by threatening the Sevayats, priests and shopkeepers with extortion and other evils. They use the showers near the kunda (pond) for shady activities at night. Some people are also involved in bootlegging. The situation has improved considerably after the establishment of the Kalighat Police Station. This station has posted several constables on duty inside the temple from seven in the morning till eleven at night. Pilgrims are encouraged to complain of any wrongdoing, threat or extortion directly to these policemen.

Through two hundred and fifty years of Western education, over the urban, commercial and industrial growth of the city of Calcutta, the Kali temple of Kalighat continues to attract a large volume of pilgrims, local, regional, national and international. Old residents of the area say that the volume of pilgrims has increased considerably over the past eighty years.