NEW DELHI: Singer songwriter and now Nobel laureate, whose response to winning the most coveted prize in literature was weeks-long silence, has now said that he will be missing the upcoming prize ceremony.

The prize may be the most important literary award in the world, but winning writers have missed the ceremony in the past too. Harold Pinter who won the Nobel Prize in 2005 was wheelchair bound and too ill to travel. Elfriede Jelinek was too anxious and unable to address the public in 2004. Aleksandr Solzhenitsyn was a Soviet dissident and too scared to leave the country in 1970.

And now Bob Dylan, Nobel Laureate in 2016, will skip the ceremony too… because he’s too busy. Dylan’s official reason for skipping the award ceremony: “Pre-existing commitments.”

Dylan -- who kept silent for weeks after his name was announced (prompting a nobel committee official to call him “rude”) -- finally broke his silence in a media interview. “Amazing, incredible. Whoever dreams about something like that?” he said, indicating that he’d like to go to the ceremony if possible. The public statement came more than two weeks after he had been announced as the winner, “for having created new poetic expressions within the great American song tradition.”

For those two long weeks, Dylan denied to take any calls from the Nobel committee. He briefly added that he had won the award on his website, and then quickly deleted it. He made no mention of the award at shows and concerts either.

As the interview that contained Dylan’s first public statements about the award was published, the academy issued an announcement saying Dylan had called them earlier that week to graciously acknowledge the award.

But Dylan went back to his ambiguous pattern -- for weeks, he refused to confirm whether he would or wouldn’t attend the December 10 award ceremony in Stockholm.

On Wednesday, the question was finally cleared. The academy announced, via its website: “Yesterday evening the Swedish Academy received a personal letter from Bob Dylan, in which he explained that due to pre-existing commitments, he is unable to travel to Stockholm in December and therefore will not attend the Nobel Prize Ceremony.” 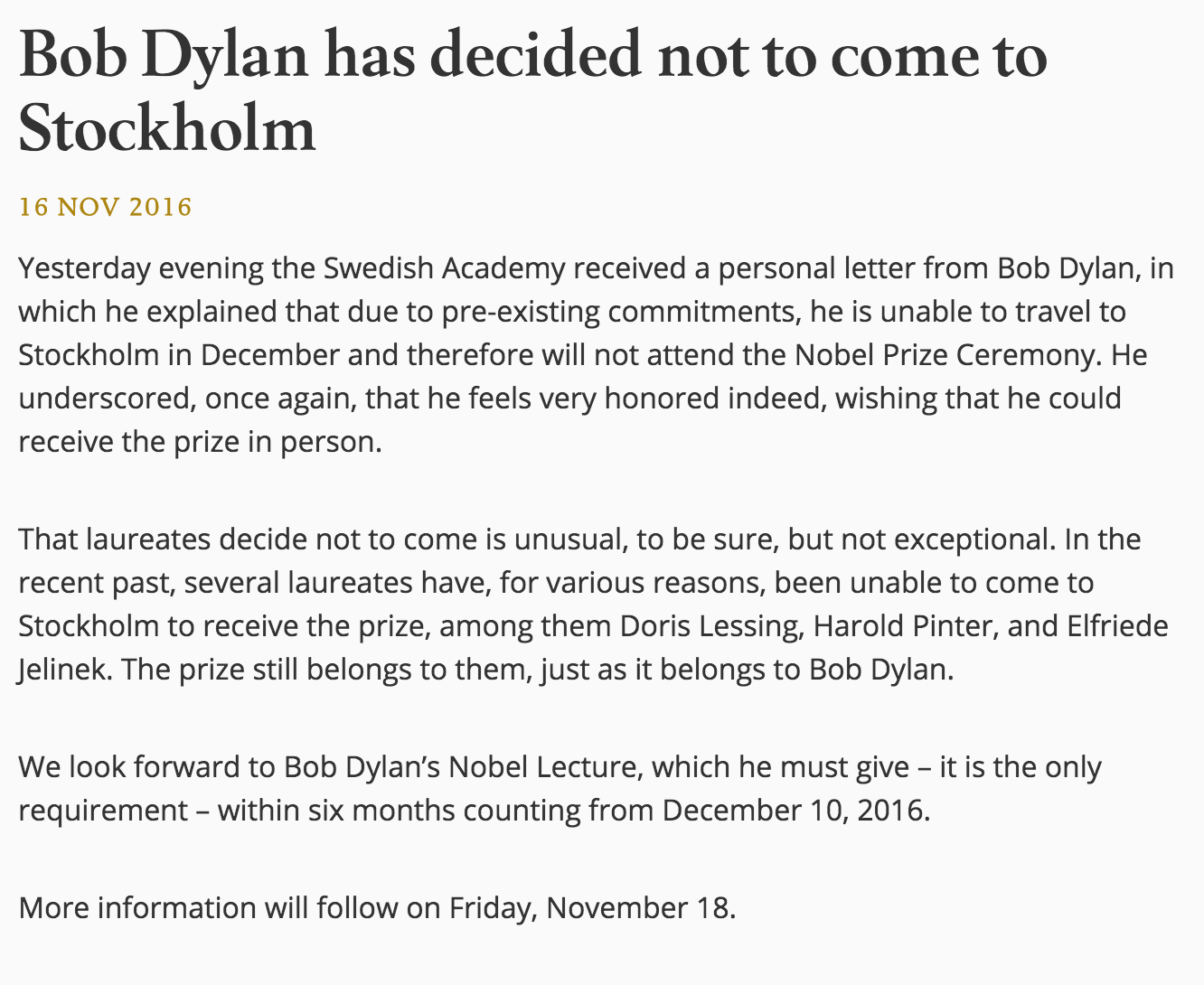 It is unclear what Dylan’s “pre-existing commitments” may be. There are no listed tour dates after November 23.