A Melody of Passion

Undoubtedly he is different. He stands apart from a crowd and holds his own. And when you have a conversation with him…he is a delight…polite, humourous, full of life, patient, extremely witty, a thorough gentleman and naturally his ‘fauji’ background is infallible and shines right through. Not many know of his proud antecedents and family background but that is one of the many reasons I wanted to write about Raghav Sachar.

I had a chance meeting with him years ago in Goa… On Baga beach to be precise while I was walking on the beach…my wet chappals in hand, sandy feet and looking all scruffy. The melodious sound of the saxophone had floated through the rhythm of the crashing waves and drawn me towards one of the well-known shacks. Raghav was sitting in a corner playing the saxophone unmindful of the star-struck audience around him. The music was phenomenal – soul-stirring and soothing and adding an air of mystery to the Goan ambience.

I became his fan for life and followed all his performances thereafter, keeping a tab on his career path and phenomenal growth as a singer, composer, music director and multi-instrumentalist.

Coming from a services background, Raghav’s childhood revolved around postings, changing schools and travelling extensively. His father, a recipient of the Sena Medal while in the army, took early retirement and then joined the police, including a stint with the BSF. His father retired as DG Police from the Orissa cadre. Born on 24 July 1981, he was the youngest of the three siblings with a huge age difference between his two sisters and himself.

While his father moved around the country, including managing the three states of Assam/Meghalaya/Nagaland during the thick of insurgency, Raghav and his family lived in Delhi for the better part of his childhood. His junior schooling was at Naval Public School and then he moved to Mount St. Marys till he completed his schooling. They resided in the government accommodation available at Chanakyapuri for about 13 years till his father’s retirement. Raghav then made his way to Australia for a Bachelor’s degree in Music.

Raghav recalls that his father used to carry a harmonica in his pocket like a typical soldier and played it while standing under a tree or whenever in a melancholic mood. When he was about 4 years old, he heard his father play, ‘Hai Apna Dil To Awara’ and immediately afterwards, he took his father’s harmonica and played back the same. The family knew then and there that a child prodigy was standing in front of them. He used to also love playing back all the tunes he heard on Chitrahaar.

Finally, he hit a deal with his father that he would not ask for any toys or gifts throughout the year but on his birthday he would get an instrument of his choice. So every year he got one new instrument to learn, experiment with and play without his parents batting an eyelid at the cost even though money was tight.

It is obvious that for a child prodigy to excel and hone on his gifted skills, family support is critical. His parents, especially his mother did everything to provide Raghav the support he needed. His father was mostly away but his mother ensured that there were no tribulations in his life.

At the age of seven, Raghav learnt the English Flute and got distinctions in grades 5 and 6 from the Trinity College of London. He started playing the drums at nine, and won Best Drummer award in the All-India Junior segment. While playing the drums he used to miss melodic content so he soon began instrument multi-tasking – playing the harmonica with one hand and drums with the other, which turned into a very funky and impressive act.

He won a lot of awards performing in inter-school and semi-professional competitions thereafter. At the age of 15, Raghav was selected by the government of India as their representative in Russia for a cultural exchange program.

Raghav recalls an incident when he was playing golf with his father and he heard the BSF band rehearsing close by. He left the game halfway to join the band and then started practicing with them, soon picking up the guitar and drums. It is no wonder that he can currently play 34 instruments – enough to blow anyone’s mind right!!

As time passed, his gift in music excelled. He had the talent, focus and vision to reach out to the world through his music. From winning the ‘Best Drummer’ award in 1994 to playing in a rock band called ‘Canzona’ that performed at key places like the IIT institutions and BITS Pilani to musicals such as ‘Grease’ and ‘Oliver Twist’ to being awarded an Inaugural Scholarship in his second year at Monash Conservatory of Music in Melbourne, Australia… Raghav began his musical journey that is mostly self-taught. 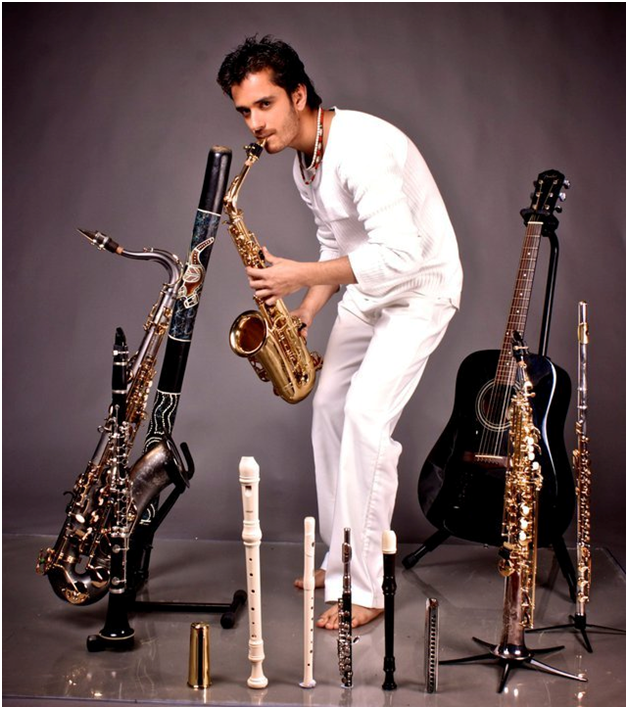 On one of his vacations home, Shantanu Moitra asked him to record with the unique Shubha Mudgal, where he was spotted by Mr. Atul Churamani of HMV and offered an album deal with their record label. He made the big move to Bombay once he finished his degree and released his debut album titled ‘For The First Time’ on HMV records to critical acclaim.

As the name suggests – it was the first time such an album was made fusing Indian melodies and musical structures with predominantly western styles and musical instruments.

When Delhi had delivered a grand Closing Ceremony during the XIX Commonwealth Games, Raghav had given a live performance that was a fitting tribute to the spirit of Delhi.

Raghav is rather particular and finicky about detailing and very involved in every level of music making, which led him to make his own home studio that allows him to have complete creative and technical control. His second studio is in Andheri. Raghav’s father nick named him ‘Orchestra (One Man Band)’ at the age of 4 and he has lived up to that in all aspects. He is the quintessential ‘One Stop Shop’ in the music industry.

He revels in live performances as these bring people together. Public adulation gives him an adrenalin rush but it also pushes him to create better music. He believes music provides a common platform to bring our rich culture to life. His tours within India and on an international platform all bespeak about bringing together musical substance and practice that are shared across sacred boundaries of many kinds. The need is to integrate various cultures in today's world.

It is through music that we are all bound together. Raghav therefore loves collaborating with other artistes who are blessed with immense talent. He has been fortunate so far to have played along with many prominent personalities nationally and internationally in the field of music and wishes to reach out to the rest of the world and touch one and all by breaking musical barriers and carving a niche. “The aim is to blend music of different cultures and I would like to name it a cultural amalgamation of sorts,” says Raghav.

He currently resides in Bombay with his wife and son and the most important part of his family and his first love – his gorgeous hunk of a dog. A born sportsman he revelled in playing squash, tennis and swimming but his current passion is golf. He tries his best to make time to play a good game with close friends and family.

Raghav has his own music label and this entails long working hours but has no complaints about hard work. “If you love what you do, then there is never a reason to complain, is there?” says Raghav and I most certainly agree with him.

The only time I found Raghav remorseful was when he spoke of how music has changed over the years. “Unfortunately, intelligent music seems to be diminishing. The 70s, 80s and 90s were the greatest times…in all genres…be it Hindi…English or even jazz. The influences during that time were great. There was simplicity with a mixture of melody and rhythm.”

Raghav discussed that if one is to become a part of the mainstream it is sure to cause problems as you tend to create music for what people want and not what you wish to. Bollywood is a completely different ball game and Raghav sees dilution here and a sense of belonging is missing. Therefore, the need of the hour is the requirement of intellectual music.

He muses that unlike in India, in most countries music is a larger entity than film stars. Global music works on a very different level but unfortunately in India, it is a very Bollywood-based scenario. Raghav fondly remembers the days of yore where the formal army and police parties had everyone dancing to Boney M and Abba and ‘Quando Quando Quando’ played on vinyl records. Michael Jackson is still his all-time favourite he confesses.

Raghav has collaborated on numerous Bollywood projects including doing the music composition and direction for Hindi movies like Kabul Express, Daddy Cool, Rustom to name a few. Even though he has performed at various international platforms he believes there's limited scope for independent music in India.

Say what you may but Raghav is here to stay… He is a musical force to reckon with!