NEW DELHI: I started the year with non-stop train journeys…and only one thing comes to my mind every time I gaze out of the windows… “Look at all that filth and garbage… Nothing has changed… So where exactly is our ‘Swachh Bharat Cess’ going?” Or rather… “In whose private coffers?” What makes you feel even smaller is when you see random foreigners travelling on the train capturing photographs on their camera of every garbage dump and sewage strewn around. While chatting with a few, they all mentioned their fascination with Varanasi but were put off by the filth seen on the Ganges River. Is this my India and is this how I want the world to see her?

The last few decades, various governments have been doing pretty much the same things…like forming committees, making elaborate plans and allocating large sums to clean up our country. I haven't been to Varanasi recently but my friends have and from what I hear… I doubt very much that I would be visiting the city anytime soon. Evidently they can’t find any efforts whatsoever in seeing the River Ganges or the Ghats being cleaned up.

So what do we make of Modi’s extravagant plans or are they all talk and no work like all his ramblings. As we have now learnt from experience and most of us exhibiting the ‘once bitten twice shy’ syndrome in Modi’s warped ideologies, we can safely say that all that his government has shown till now is: The blind leading the blind! 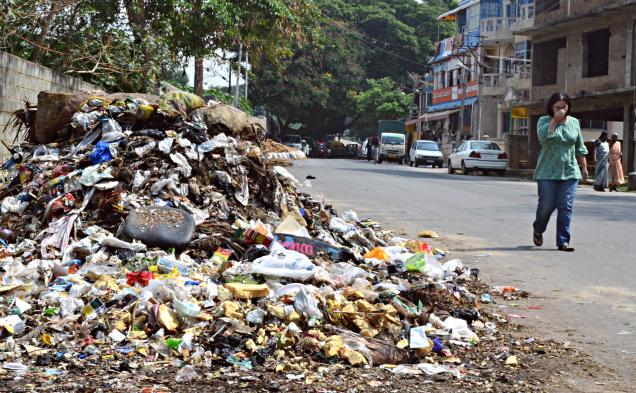 There is always a lot of noise in the media about ‘Operation Clean-Up’, but our country and its rivers still remain how they were – covered in dirt and muck. There are no visible signs of on ground action to reign in polluting industries, sand mafias and tanneries exploiting our rivers. Without a strong move in this direction any talk of budget allocation and schemes are pointless. Budgeted money can easily be swept under the carpet and looted as we all know.

The election promise was that the Ganges would be cleaned in 5 years but now it has been stretched to 18 years. Apparently an Israeli corporate company has been hired to clean the river and guess what… The army has been roped in as well. When stuck – Holler – And here comes the army to the rescue! The Government went on to utilise the personnel of Territorial Army (TA) in 'National Mission for Clean Ganga'.

The Ganges is probably one of the greatest rivers on Earth, but it is dying. From the icy Himalayan peaks, where it begins, right down to the Bay of Bengal, it is being slowly poisoned. The Ganges is revered by Indians all over the world but it is also the sewer that carries away the waste from the 450 million people who live in its catchment area. Pollution from the factories and farms of the fastest-growing large economy in the world – and from the riverside cremation of Hindu true believers - has turned its waters toxic. One-tenth of the world’s population relies heavily on the Ganges and its tributaries. Yet the river has become one of the most polluted on the planet, denying hundreds of millions access to clean water and robbing the world of its once sublime beauty.

The ugly truth is that: “We have the science and technology, the talents, the manpower…everything is there. What is missing is honesty and dedication.” The problem is simple. The government just does not enforce the laws it has enacted. A number of initiatives have been undertaken to clean the river but failed to deliver desired results. An estimated Rs 2,958 crores has been spent till July 2016 in various efforts for clean-up of the river.

By inviting corporate companies to take up the work of urban sewage management in the towns and cities along the Ganges, the government had hoped that its renewed effort to clean the river did not meet the same fate as the previous attempts of several decades but it seems it has. Over the last 30 years through the Ganga Action plan, the government has spent more than Rs 4,000 crore on cleaning the river without any visible improvement in its condition. Pollution has only worsened in all these years. A holistic plan seems to be missing.

Every year, up to 30,000 bodies are cremated on the legendary ghats in Varanasi, the riverfront steps leading to the Ganges. Tourists have long found this spectacle haunting and mesmerizing. For Hindus, cremation by the Ganges is a way of life. Yet cremation on the ghats is now beyond the reach of ordinary people. It has become far too expensive and many families simply dump dead bodies directly into the Ganges instead of cremating them.

Hundreds of industries release their waste directly into the rivers. This discharge of effluents has more than doubled in the last 20 years, and experts predict another 100% increase in the following 20 years. Our rivers are all toxic and its levels of pollution are terrifying.

Our infamous Babus have already stolen millions in the name of cleaning the Ganges. Tragically, they have lacked both will and skills to deal with the massive problem of increasingly toxic rivers that have been the lifeblood of Indian civilization.

Meanwhile, the rapid explosion of India’s population is putting great strain on rivers and water resources. Increasing use of groundwater has resulted in water levels falling. Even as water is decreasing, pollution is rising as over a billion people consume more stuff and throw the waste directly into rivers.

WHO has declared that the rivers now have almost 3000 times over the limit of toxins. The Yamuna, the main tributary of the Ganges, is now the most polluted river. Delhi lies on the Yamuna, and this megalopolis dumps 60% of its untreated sewage into the river. Coliform bacteria, heavy metal, nitrogen and other pollutants have killed the river. Yamuna’s toxic waters join the Ganges at Allahabad to further contaminate India’s holiest river.

For years, Indian politicians have been making slogans and announcing programs to clean the Ganges. Prime Minister Narendra Modi left his home state of Gujarat to contest from Varanasi, India’s holiest city, to project himself as a national figure instead of a regional one. He declared pompously, “Mujhe Maa Ganga ne bulaya hai,” which literally translates as “Mother Ganga has summoned me.”

Modi was quick to approve his pet project but it took another two years for the initiative to come up with no clarity on how it would work. Opposition parties rule the states through which the Ganges flows, and it is unclear who is to do what to clean up the mess.

Our Babus continue to be in-charge of everything from educating the masses to cleaning the rivers. Their track record however does not inspire confidence. It came as no surprise when our Supreme Court delivered a stinging rebuke to them damning their shambolic efforts. Sadly, the cleanliness drive in our country seems a distant dream...

The latest being the garbage crisis in our National Capital and the slugfest between the politicians with the blame game on! The Government has been corrupt and incompetent in dealing with problems at all levels. Yet even now, the problem of garbage and pollution can be solved if we snap out of apathy and ignorance.