Will We Ever Learn To Respect The Fallen Soldier?

NEW DELHI: Our country celebrated its 68th Republic Day today to honour the Constitution of India as it came into force on the same day in the year 1950. The chief guest this year being Crown Prince of Abu Dhabi Sheikh Mohamed bin Zayed Al Nahyan.

Nineteen soldiers of the 4 and 9 Para, the Special Forces’ units which undertook the daring cross-border surgical strike across LoC, have been awarded gallantry medals including a Kirti Chakra while their commanding officers have been given Yudh Sewa Medal. 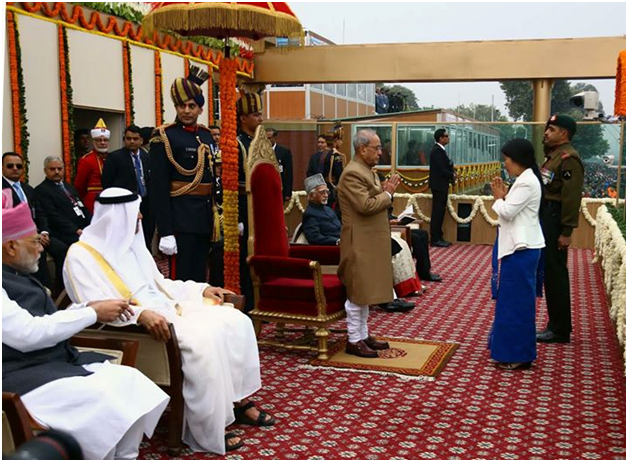 Major Rohit Suri of 4 Para, who led one of the teams across the LoC targeting terrorists' launch pads, was awarded the Kirti Chakra, the second highest peacetime gallantry award, on the eve of the Republic Day. Havildar Prem Bahadur Resmi Magar of the Gorkha Rifles got the Kirti Chakra posthumously.

This morning President Pranab Mukherjee awarded the Ashoka Chakra (Posthumous) for Havildar Hangpan Dada. He fell in battle in Jammu and Kashmir in May last year while fighting terrorists. Dada’s sobbing widow Chasen Lowang received from the President the highest peacetime gallantry award given for valour, courageous action and self-sacrifice. Havildar Dada is survived by his wife and two children, daughter Roukhin, 10, and son Senwang, 6.

The most incredible first this year was that while India showcased her military power, honoured her soldiers and displayed her cultural diversity, our Defence Minister, Manohar Parrikar, slept through most of it. That was a shameful sight indeed.

Every year, as an army daughter I am compelled to write about the protocol laid down at the Republic Day parade and the lack of etiquette shown to the widows of our brave martyrs.

*I wrote about how it was rather dismal and upsetting to see only the President and the three Service Chiefs stand up in respect during the solemn award ceremony while the other dignitaries watched the whole show, sitting comfortably in their seats. Decency demanded that everyone stood up respectfully when the martyred soldier’s family member came up on the dais to receive the award. This is nothing more than basic courtesy and good manners and well all-round graciousness being shown at such a grave occasion.*

*For me, the most poignant moment then was when Lance Naik Mohan Nath Goswami’s widow Bhavana came up on the dais to receive the Ashok Chakra that had been awarded to the fallen soldier. While there were many firsts in this particular parade, I was pleased to note that during the gallantry awards ceremony this year, while handing out the bravery medal and citation it was not only President Pranab Mukherjee and the guest of honour, the French President Francois Hollande who stood during the whole ceremony but this time Prime Minister Narendra Modi and Defence Minister Parrikar made it a point to stand up as the widow came up on the podium. I can’t say the same for those seated on the opposite flank who clearly did not stand up as the occasion demanded. There is a huge difference in my opinion between protocol and respect for the dead.*

2017: This was sadly lacking again this year which has prompted me to write another piece immediately after the parade was over. It is of prime importance that at such solemn occasions we must look after our war widows and the dependents of martyrs with full regard and compassion.

One cannot forget the sacrifices of the fallen soldier which has been made not only for their country but for each one of us as well. If anyone demands more respect than others are those who show the highest degree of valour and selfless sacrifice in defending their country against external and internal threats. For there is nothing greater than this, believe you me. It is only the soldier who displays exemplary courage while facing the toughest of situations and fighting for their country.

So tell me, when will we learn to respect the fallen soldier? When will our leaders take time out and formalise protocol that is followed year after year. Is it that difficult for everyone to stand up for a few minutes to honour the widow/family member of the martyr?