The young actress with a charismatic screen presence who brought Rabindranath Tagore’s Charulata of the novelette Nastaneer (The Broken Nest) to life on celluloid through the beautiful creative talents of Satyajit Ray turns 75 on February 10 this year.

This lady noted for her dignified posture, her disarming smile and her regal wardrobe, stepped into the stage when she was barely nine or ten and into films in 1950 with a small role in Kankaltala Light Railway of which no print has survived.

She has journeyed miles since then and has a memorable filmography to look up to, filled with some of the most outstanding classics of Bengali cinema that have turned into international milestones over time. Last month, she was the unanimous choice for the Lifetime Achievement Award bestowed on her by the West Bengal Film Critics Association. This month, Federation of Film Societies of India, Eastern Region is paying a tribute to her rich contribution to Bengali cinema. 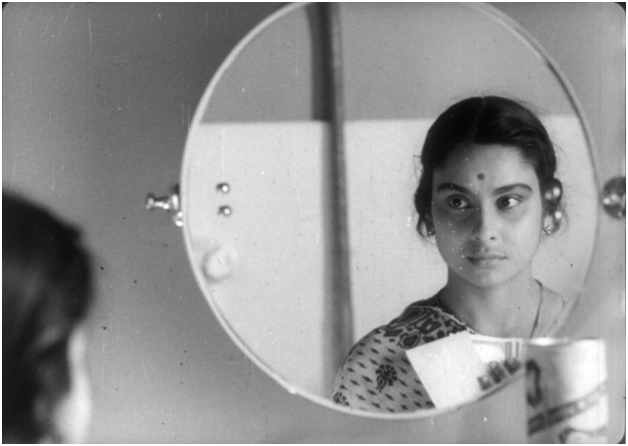 Her two daughters are well-settled in life. Husband Nirmal Kumar, who has crossed 80, lives in his own two-storey house alone. They separated many years ago but are in touch for family functions. A huge, Black-and-White picture of Charulata looking through her opera glasses covers one section of the wall of her living room, choc-a-bloc with the awards and trophies she has gathered over the years.

Though she has worked under the directorial baton of Ray in three films, Mahanagar, Charulata and Kapurush-O-Mahapurush, she maintains that Charulata is the best role of her career. She hates to talk about the strong rumours about her relationship with Satyajit Ray while they worked together that is said to have crossed the borders of the director-actress relationship. 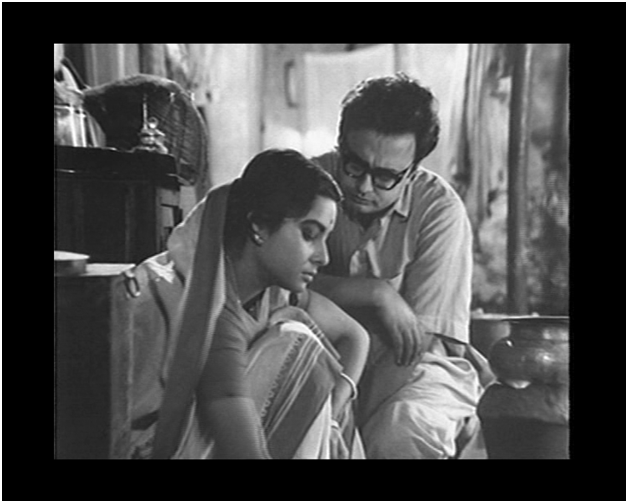 How does she look back on the ‘immortality’ of Charulata, the character? Her elaboration is straightforward and prompt. “if the audience is to be the indicator of the character's staying power and popularity over the years, crossing boundaries of geography, language, caste, community and class. But given the role today, I still feel I could have done better than I did then.

Experience teaches you many things, one of the best being to be able to look at your past mistakes. Alas! Time does not permit you to correct them. I judge my favourite character according the audience's response to the film and to the character. So, even if personally I could pick some more characters, I refrain from doing so because my personal judgement could suffer from the bias of my having liked the character, the script, the positioning, the complexity etc. But the audience is the final judge.”

She regrets not having said “yes” to Raj Kapoor who waited for six long months for her to accept the role of the teacher Simi finally played in Mera Naam Joker. She also refused a role in Pradip Sarkar’s Parineeta but she has an explanation for her rejection of the two Hindi films. “Firstly, I did not know Hindi at all and did not wish to spoil a film only because of my bad Hindi and dubbing was a straight ‘no’ for me. Secondly, people from the Bengali film industry at the time were very snobbish and arrogant and looked down on Hindi cinema. But we did not know then nor notice the change that slowly crept in and Hindi cinema has overtaken Bengali cinema many times over.”

Madhabi, whose original name was Madhuri, performed three completely different characters in the three films by Ray. In Mahanagar (The Big City) she plays Arati Majumdar, a middle-class housewife whose life changes slowly and surely when, under severe financial pressures, she takes up a job as a salesgirl in a company selling advanced sewing machines.

Though the job brings out qualities within Arati that remained untapped when she was house-bound, it does not offer her the freedom of choice one would expect it to. It is the husband who accepts the fact that the wife must take up a job to supplement the meagre finances of the family. He writes the application letter, asking her just to sign her name below. She asks him how she should spell out the family name Majumdar and he tells her how. Later on, the same husband, burdened by his own insecurities, pens a resignation on her behalf and asks her to deliver it the same day. She signs the letter the way she did the letter of application. But just as she is about to submit it, her husband calls her up to tell her not to give it in.

Till this point, Arati is simply serving the role of a puppet in the hands of a seemingly democratic and understanding husband who is actually as tradition-bound as the father he is ideologically distanced from. But with time, and with the vested responsibility of being the sole breadwinner, Arati unwittingly comes into her own, and ceases to be a puppet with the choice she makes following her Anglo-Indian friend Vicky’s very unfair dismissal. Madhabi invests the multi-layered shades of the character with her subtle restraint she is famous for.

Charu of Charulata is the most complex, fluid, flexible, bold and dynamic among Ray’s celluloid women. Her constant ‘companion’, in the opening scenes of the film, is a lorgnette, (a pair of opera glasses.) They offer her the only ‘window’ to look at the world outside. This includes husband Bhupati, because she finds him too distanced from her world of emotions. The rhythmic use of the zoom to keep time with the music track as she looks through the glasses at her husband, underscores this beautifully.

This is one, among some other ways of relieving herself of the stasis that has set into her marriage. The lorgnette disappears after Amal’s entry into the story. Charu takes up embroidering a pair of slippers, originally meant for Bhupati, her husband, but which she later decides to gift Amal with. Amal leaves them behind, as a sign of open rejection, without word or letter. She embroiders the initials of her husband on a handkerchief. As he wipes away his pathetic tears inside the carriage, after discovering Charu’s breakdown and the reason for it, he finds it is the same handkerchief his wife had given him.

“In Kapurush of Kapurush-O-Mahapurush, I am a young housewife married to a very rich tea-planter settled in the plantations of North Bengal. My stable life is hit as if by a torrent when my lover who did not have the guts to elope with me before, arrives and asks me either to leave with him. I agree initially but leave at the last minute. What intrigued me is the title of the film – Who is the ‘coward’ in this story? Is it the lover or is it the wife?” she asks.

She refuses to name her favourite roles because she says, “every role is precious for some reason or another. But I really feel for those films that did not quite make the grade though they were very good and has powerful scripts. Of course, the few of my all-time favourites are Charulata, Mahanagar, Subarnalata, Baishey Srabon and Utsab. I also liked the role of an air-hostess that I played in a Tapan Sinha film called Aandhar Periye. The girl turns blind after a love marriage and the film is about the psychological trauma she undergoes after becoming blind. The film would have done better if shot in Black-and-White because the colour processing turned out to be so bad that the film did not do half as well as it was expected to.”

Does she feel lonely, living alone all by herself? “Never. I am very happy living like this, all by myself, because life does not permit me to feel alone. People are dropping in at all hours of the day, for interviews, for discussions, for television talks, and in connection with the extensive social work I am linked to. Where is the time to feel lonely? At other times, I am facing the camera, or, thinking about my next directorial feature, or, writing out some project, or, just relaxing. This is a Sunday and you are the fifth person to have dropped in for an interview. I have several others lined up for the rest of the day. Lonely? Tell me another.” On that note, we wind up.