A Generation Fed On Misha, Sovietland....

The second-hand books seller was almost done for the day and he was about to leave. Carefully stacking up the old magazines in his tiny room, he couldn’t conceal his curiosity. “You are not the first person to enquire about old copies of Misha and Soviet Union. What is so special about them?” he asks.

Soviet Union, Soviet Life, Sovietland and Misha were propaganda magazines from the erstwhile Soviet Union, circulated across the world until the disintegration of the USSR. Those were the days before globalization and India was the mighty Soviet Union’s best friend. Russian magazines and books influenced the reading habits of Indians a great deal, especially those in communist leaning Kerala.

In a state where people named their children after Lenin, Stalin and Nikita, these magazines still conjure up nostalgia about a bygone era. “Misha was the most beautiful magazine I have seen as a kid. The glossy pages featured Russian folk tales, riddles, puzzles and exquisite illustrations. It was our window to the world... Russia literally delivered to your doorstep,” says George, now in his late thirties. 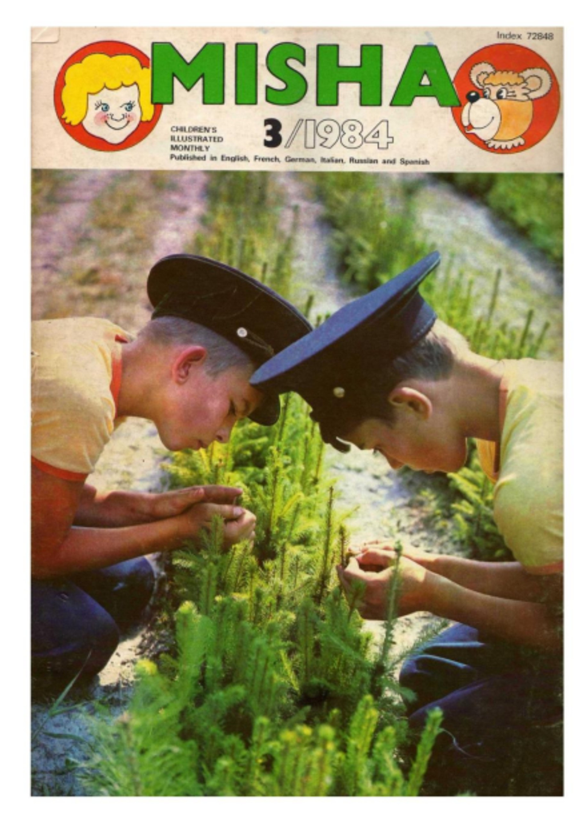 “I was so happy when I discovered an online link to download old copies of Misha. It was uploaded by an ardent fan from Mumbai. There were so many comments below his blog post, requesting him for a physical copy,” he says.

Not everyone shares his enthusiasm for anything Russian. Harikumar, hailing from Alappuzha, has a different take. “Each issue (of Soviet Union) had smiling faces of Russian working class, happy families, clean streets with swanky cars and factories with state-of-the-art machinery. Everything was picture-perfect. It was nothing but a public relations exercise to extol the virtues of communism,” he says.

Soviet Union and Sovietland seldom talked about politics but rather focused on life and culture. Published in English, Russian, Spanish, French, Italian and Hungarian, Misha was printed and mailed from Moscow, while Soviet Union was printed at respective consulates in each country. Clearly they were propaganda materials; however, these inexpensive magazines were rich sources of information about life in faraway places in the pre-Internet era. Not everyone had access to magazines like Time and Life.

Sovietland, sent out from the Soviet Information Centre, was printed in 13 Indian languages. The Christian Science Monitor reported that more than 10 ton propaganda material was flown in from the USSR every day, to be distributed across India, apart from the vast quantities of materials by sea.

Coming to other mediums, Radio Moscow used to broadcast programmes including news in Malayalam. Shortwave radio enthusiasts still cherish the evenings they would tune into the station.

Many of the Malayali readers were brought up on a diet of Russian literature translated to Malayalam. Local libraries proudly displayed Maxim Gorky’s Mother, Nikolai Ostrovsky’s How the Steel was Tempered, Boris Polevoi’s A Story About a Real Man and so on.

Moscow Gopalakrishnan and his wife Omana were very popular among the readers; the duo had translated around 100 works to Malayalam. The snow-laden Russian streets, characters clad in leather boots and woollen coats and the vodka they drank all became part of the Malayali nostalgia, thanks to the gifted translators.

Prabhath Book House, based in Trivandrum, was the importer and distributor of Soviet books in Kerala. With branches all over Kerala, Prabhath has played a pivotal role in bringing Keralties closer to Russian literature.

The influence of Russian literature in Kerala was so much so that the renowned Malayalam writer Perumbadavam Sreedharan’s Oru Sankeerthanm Pole explored the intricate relationship between the legendary Russian writer Fyodor Dostoyevsky and his stenographer Anna Snitkina. The novel first published in the 90s has sold over 2.5 lac copies to date.

Misha, the children’s illustrated monthly, has a cult fan following not just in Kerala but also in Europe and faraway Latin American countries. They are all eager to lay their hands on an old copy, a sort of a time-machine to transport them to their childhoods.

Mir, Raduga and Progress were publishers based in Moscow with a mission to familiarise the world with Russian literature. The printing was top-notch and the smell of the paper was one-of-a-kind. A Google search reveals that Mir Publishers is still operational in Russia, however they are not anymore into foreign language publishing.

Times have changed. Cold war is history. The world is not what it used to be. Today the 45th president of the US Donald Trump and Russian president Vladimir Putin are best buddies, at least for the record. For the nostalgia junkies among millennials in Kerala, Soviet Union is a paradise lost.With or without propaganda.

A Day Begins in Kashmir 14 hours ago