2017 Brings Cheer For Indie Cinema: Is The Tide Turning?

In the very first month of 2017, Indian independent cinema, which means the smaller, more realistic film made by new or known directors, has made a grand entry on the international front. Several films have unexpectedly created waves and even records at the four major international festivals that filmmakers vie for.

The year opened with the Palm Springs International Film Festival (January 5 to 16) with its 130 films including almost all the Oscar nominated titles. Its final list of 30 Best Films has two from India, both nascent works. One is the debut feature by N Padmakumar called ‘A Billion Colour Story’, on the 11-year-old son of parents whose idea of a pure and inclusive India is shattered when they encounter religious fundamentalism for the first time.

The other is Rahul Bose’s commendable second feature ‘Poorna’, a biopic about Malavath Poorna from tribal Telangana, who becomes the youngest girl to climb the Everest.

In the heady, buzz-heavy Sundance Film Festival (January 19 to 29), Mecca for young entrepreneurial film talent the world over, the debut documentary ‘Machines’ by Indian filmmaker Rahul Jain, won the Best Cinematography Award (it went to Rodrigo Trejo Villanueva). The film is an intimate, observant portrayal of the rhythm of life and work in a gigantic textile factory in Gujarat, which draws the viewer into its dehumanising physical labour and the huge divide between first world and developing countries. Earlier the film was in competition at the highly valued Amsterdam’s Documentary Film Festival.

International Film Festival Rotterdam (January 25 to February 5) provided the biggest surprise. From Kerala, Sanal Kumar Sasidharan’s ‘Sexy Durga’ created a stir when it screened in the Viewing Room at the 2016 NFDC Film Bazaar to its select range of film professionals from all over the world. That led Rada Sesic, the programme advisor for Indian films to recommend it last-minute to the Rotterdam selection panel.

‘Sexy Durga’ was selected immediately, and, to everyone’s elation, in the highest echelon, in Competition. Quite a turn around for a small film by a reticent filmmaker whose two earlier films were close to ignored even though both had a niche following. ‘Sexy Durga’ is the first Indian feature film in decades to compete at a longstanding European film festival. However, greener pastures await our newcomers. The coveted Sundance festival in the US has stepped in to favour our younger spirited filmmakers. ‘Naman Raman’, directed by Q, was in Competition there last year, another hurrah for new Indian cinema. 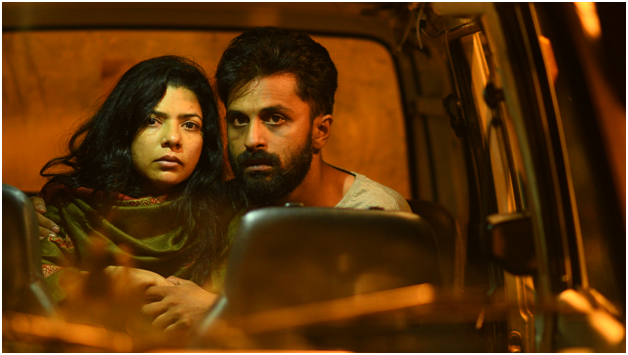 ‘Sexy Durga’ takes us to a village in Kerala where the goddess Durga is being worshipped in a high-pitched celebratory parade inching its way on the main street. On a dark, lonely street a nervous runaway couple, Durga and Kabir, accept a ride to the railway station which turns out to be nightmare for the two. The film poses questions of where worship and women belong in today’s society.

What’s more, ‘Sexy Durga’ won! It bagged the highly prized Hivos Tiger Award with its handsome 40,000 Euro cash award. After how many years? In 1994, Shaji N. Karun’s ‘Swaham’ was arguably the last film to be selected in competition at Cannes. And in 1999, Murali Nair’s ‘Marana Simhasanam’, could be the last Indian film to win a prize at a leading festival – it won the Camera d’Or for Best First Feature Film.

India also took pride in another competition film in Rotterdam’s Short Film category, Prantik Basu’s 26-minute ‘Sakhisona’, was bestowed one of the three Best Short Films awards of this section. Set in the 7th Century, the film sees Sakhisona and her lover elope to an abandoned village in the woods where their life of love and solitude is shattered by a jealous witch’s spell.

Soon after came news of the exciting Indian films selected by the Berlin International Film Festival (February 9 to 19). The downer here remained that there was no Indian film in its two main sections, Competition and the Panorama.

However, the mood for India was upbeat as Indian films featured prominently in Berlinale’s respected International Forum with two Indian films, both debut works, Amit V Masurkar’s ‘Newton’ and Haobam Paban Kumar’s ‘Loktak Lairembee’ feature in Berlinale’s forum. ‘Newton’ is a dour political satire on a rookie government clerk who conducts the first ever elections in Maoist infested jungles of central India.

‘Lady of the Lake’ is set in the remote Loktak Lake in Manipur, where the fishing community live on its floating island masses known as phumdis. The film harks back to the real-life intervention by the government in 2011, which saw these floating homes destroyed and destitute villagers forcibly relocated.

From Kolkata, Ashish Avikunthak’s first feature-length fiction film ‘Aapothkalin Trikalika’ (The Kali of Emergency) is in Forum Expanded. The film, co-produced by Kristina Konrad and weltfilm Berlin, is in Bengali. It explores the manifestation of divine intervention in today’s times of constant socio-political change through the awe-inspiring incarnations of goddess Kali and her celestial avatars.

Amar Kaushik’s ‘Aaba’ shot in the picturesque Arunachal Pradesh features in Berlinale’s Generation Kplus, which is meant for age-groups 14 to 17. It revolves around an orphan girl from the Apatani tribe, who faces unexpected events on hearing of her grandfather being in the terminal stages of lung cancer.

Then there is the impressive Berlinale Talents, a segment which nurtures the promise of over 250 promising young hopefuls who have made a mark in various areas of filmmaking. The seven selected from India are Actor Palomi Ghosh, Director Natasha Mendonca, Abhro Banerjee Editor, Screenwriter/Director Shubhashish Bhutiani, Cinematographer Saurabh Monga, Director/Editor Archana Pahadke and Film Critic/Journalist Archana Nathan.

The Berlinale awards will be announced on its closing day, February 19th. With the sudden upsurge of laurels, hopes are high.

Is the tide turning for new Indian cinema? Decade upon decade in past years have been bleak with no Indian film selected in competition in the three top world festivals – Cannes, Berlin, Venice.

At one time – the 60s to the mid 90s, there was a rush to grab Indian films and one or more invariably featured in leading sections. Benegal’s ‘Ankur’ (1974) was in competition in Berlin as was ‘Nishant’ (1974) in Cannes. Satyajit Ray was a regular mostly in Berlin, as was Mrinal Sen. ‘Garm Hava’ was instantly picked up to compete in Cannes.

In recent years, we have rejoiced when an Indian film gets to an international festival. There is the view that we are a self-sufficient cinematic entity and festivals don’t really matter in. But that bubble has burst with the global commercial success of Ritesh Batra’s ‘Lunchbox’.

So, hopefully, India’s independent film is gaining ground with its content, its presentation and stories of universal appeal.